A lot of the information around the coronavirus outbreak has been confusing, and face coverings have been no exception.

First, Americans were urged not to wear masks. Or at least not to buy them.

Then, they were asked to voluntarily wear a face covering. And now, some Massachusetts cities are threatening to fine people who are caught anywhere in public without them.

If one thing is clear, it’s that masks aren’t going away anytime soon in Massachusetts, which has the third-most COVID-19 cases of any state in the country. As officials look to gradually reopen their economies in the coming months, Gov. Charlie Baker says that people will often be “expected to wear a face covering,” for the sake of both themselves and others.

“I can’t say this enough,” Baker said Wednesday. “There’s a lot of evidence at this point that many of the people who contract COVID-19 don’t show symptoms, but are in fact carriers and are contagious.”

That evidence, which estimates that as many as 25 percent of people infected by the coronavirus are asymptomatic, has underscored some of the recent municipal orders in cities like Brookline, Cambridge, and Somerville, requiring people to cover their face at all times in public — inside or outside — with fines ranging up to $300 for those who willfully refuse.

“When we breath, when we cough, when we sneeze, we release moisture particles into the air that other people can breath in and that’s how this disease spreads,” Somerville Mayor Joe Curtatone said in a recent video explaining his city’s order.

“When you go out you put on a shirt, pants and shoes,” Curtatone added on Twitter. “For the near future, you’re going to need to add a face covering to that list.”

Baker’s administration has issued an advisory asking Massachusetts residents to voluntarily cover their face when they’re in places where it’s hard to remain six feet away from other people, like a grocery store.

The governor said Wednesday that he plans to leave mandatory orders up to cities and towns, rather than issuing a statewide requirement.

It was initially unclear whether municipalities even had the legal authority to issue such orders. But following questions from local officials, Attorney General Maura Healey’s office clarified guidance this week to affirm that cities and towns could order people to cover their face in public (the guidance previously only said that cities and towns could “encourage people to wear face coverings in public on an advisory basis”).

“That’s a good example of something we would leave up to the locals,” Baker said Wednesday, adding that municipalities have a “fair amount of latitude, and that’s appropriate.”

He did, however, hint that face covering rules could play an increased role as the state moves to reopen its economy.

Baker said that masks have been a “big part” of the discussions had by his administration’s recently announced advisory board on easing social distancing restrictions. He also noted that officials were already looking at other countries for guidance on what to do about public transportation; some countries, like France and Germany, have made mask-wearing compulsory on public trains and buses.

“As we go forward, we’re all going to be — in many cases and many circumstances — expected to wear a face covering,” Baker said. A lunchtime wait outside the Registry of Motor Vehicles on Blackstone Street in Boston.

A growing number of municipalities have already made that expectation a temporary rule — to varying degrees. As of Thursday, more than two dozen cities and towns in Massachusetts had moved to make it a potentially fineable offense to be in certain public settings with one’s nose and mouth exposed. While local officials generally say that enforcement efforts will primarily focus on public education rather than punishment, the fines range from $50 in Brookline to $1,000 in Peabody.

The orders also vary in scope. Similar to federal guidelines, most municipalities — including Peabody — are only requiring residents to wear masks in indoor public settings, like grocery stores and other essential businesses, where the risk of transmission is highest, due to the inability to consistently stay six feet away from others.

However, orders that also require masks in all outside public places have recently gained steam. The stringent requirements don’t mean people shouldn’t go outside. In fact, both officials and epidemiologists have encouraged people to keep going outside for individual exercise during the pandemic, noting that the physical and mental health benefits outweigh the risks.

But they also say everyone — walkers, runners, cyclists — should be wearing a mask. The orders in densely populated cities like Cambridge and Somerville came amid concerns about crowding at popular local paths and parks, as many continued to ignore the mask advisories previously issued by the municipal officials.

Boston Mayor Marty Walsh — whose city has issued only an advisory that people wear masks when they can’t socially distance — implored runners and cyclists this week to wear a face covering.

“I can’t tell you how many runners and bikers I see breathing heavily and blowing right past people with no face covering,” Walsh said during his press conference Wednesday. “This is not considerate to the people around you, and I understand why it’s making people angry.”

Experts have consistently said that the risk of meaningful transmission in uncrowded outdoor areas is low; people are unlikely to get sick from passing someone on a bike path.

However, Bill Hanage, a professor of epidemiology at the Harvard T.H. Chan School of Public Health, says that the orders requiring people to cover their face in all outside settings can reduce the chances that someone incidentally wanders into more high-risk areas without a mask — even if it doesn’t make a difference when they’re by themself.

“If you do say that face masks should be worn under all circumstances, then … perhaps you cut down on the number of folks who might walk into a grocery store not wearing one,” Hanage said. 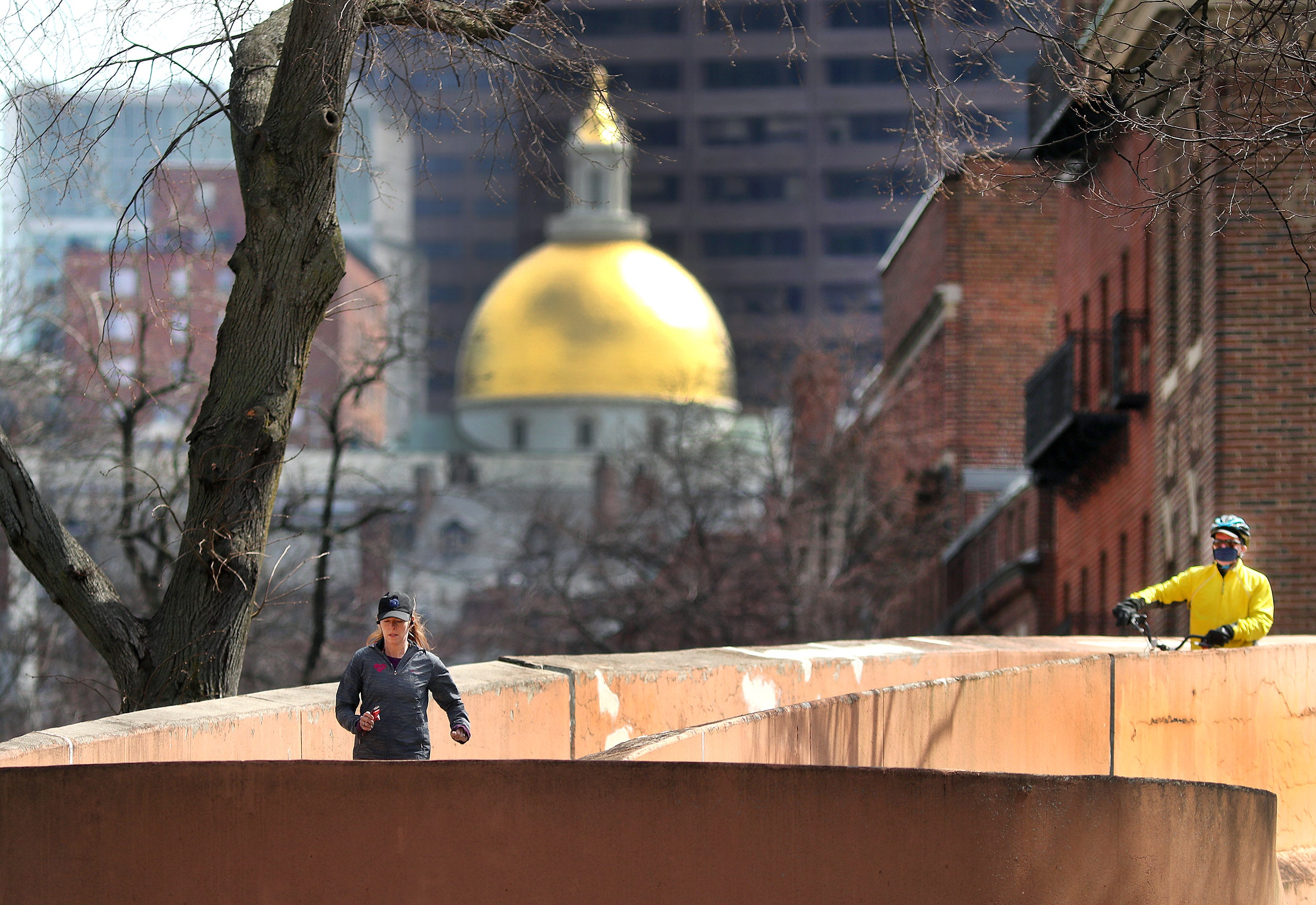 A runner with no mask runs along the Arthur Fiedler Footbridge to the Esplanade earlier this month in Boston.

Barry Bloom, a renowned infectious disease expert and immunology professor at the Chan School, says he is a “big believer” in masks, “imperfect” as they may be. While the cloth coverings that the general public is urged to wear may not provide the same protection as the medical-grade masks reserved for hospitals, Bloom says they can still reduce the “force of infection” in close-contact areas.

In other words, masks may help reduce, if not completely block, the amount of virus particles that gets into a person’s lungs, which can determine whether — or how badly — they get sick.

“There are very few infectious agents that do not show — in animals and most likely people — a dose response curve,” Bloom said. “The more you get, the higher the chance you get sick. The less you get, the more chance that you will get a sub-clinical infection or, by innate immune mechanisms, just get rid of it.”

Bloom says that the United States should have incorporated masks into the country’s response to infectious respiratory diseases “a long time ago.” Unlike countries in Asia where masks have become part of the culture, they still face a certain stigmatism in the United States, which could pose a problem for broader efforts to get people to cover their face in public.

“As we can see with our leadership in Washington, it is not part of the culture,” Bloom said, alluding to Vice President Mike Pence’s recent decision to ignore a Minnesota hospital’s mask policy.

“We will have an uphill battle maintaining that,” he said.