Maine restaurant owner Rick Savage followed through on his vows to reopen for business on Friday, defying a state order that all eateries remain closed until June because of the coronavirus.

But by the end of the day, Savage announced that Sunday River Brewing Co. in Bethel would once again close “until further notice” after the state revoked his health licenses.

We will be closed until further notice as of Friday May 1st. Thank you all for support today, please search for the…

Posted by Sunday River Brewing Company on Friday, May 1, 2020

More than 150 people had lined up to eat at the restaurant by mid-afternoon Friday as the eatery reopened despite orders from Gov. Janet Mills, according to the Portland Press Herald.

“I can’t tell them where to stand and what to do,” Savage told the Bangor Daily News of his customers, many of whom were not observing guidelines for social distancing by standing 6 feet apart as they waited to get into the restaurant. “We’re America. If they want to isolate, they can isolate.”

Savage made an appearance on Fox News’s “Tucker Carlson Tonight” the day before, criticizing the governor’s response to the COVID-19 pandemic and encouraging other businesses to follow his lead in defying orders to stay closed.

At one point during the interview, Savage offered up what he said was Mill’s cellphone number and encouraged viewers to call her directly and dared state officials to take him to court.

“We’re encouraging all businesses in Maine to open up,” he said on the program. “We should have never been shut down in the first place. We need to open back up, get this summer tourist business going, or we’re going to lose a third of our restaurants (and) who knows how many motels and other businesses. So we’re advocating for everybody, not just for my restaurant. It’s time to go back to work.”

By around 4 p.m. on Friday, the state had revoked his liquor and health licenses, according to the Press Herald.

During a press conference outside the busy restaurant, Savage insisted he would stay open, calling the state’s move “ridiculous,” the Daily News reports.

“I’m staying open,” he said. “I’m defying the order with no licenses and they’re going to fine me every day.”

The restaurant owner urged people to donate to a GoFundMe page, “Maine Back to Work Fund,” that was launched to raise money for Sunday River Brewing Co. and other businesses opening, to help pay fines they incur and finance the legal action Savage said he is planning against the state.

Savage singled out Mills for the state’s move to revoke his licenses, referencing his appearance with Carlson on Thursday.

“I did call her out, I gave her phone number out,” he said. “It’s retaliation. I didn’t make her look very good, but she hasn’t made herself look very good. So it’s nothing we did. We’re just trying to get open and trying to do it civilly and never once coming after people.”

Mills’s office did not immediately return a request for comment from Boston.com.

On Friday during a press conference, the governor urged the state to come together in facing the challenges of the coronavirus pandemic. As of Friday, there have been 1,123 confirmed cases of the virus in the state and 55 people have died.

The Daily News reports that the restaurant served about 250 people by 6 p.m. on Friday. A few hours later, the restaurant announced that it would close until further notice. But the business continued to serve customers through at least 10 p.m., according to the Press Herald.

“We will be closed for the weekend as our state permits have been taken away,” a message read on the business’s Facebook page on Saturday. “Monday we are going check on our Federal Permits before we make decisions on re-opening.”

We will be closed for the weekend as our state permits have been taken away. Monday we are going check on our Federal Permits before we make decisions on re-opening. Thank you for your continued support.

Posted by Sunday River Brewing Company on Saturday, May 2, 2020 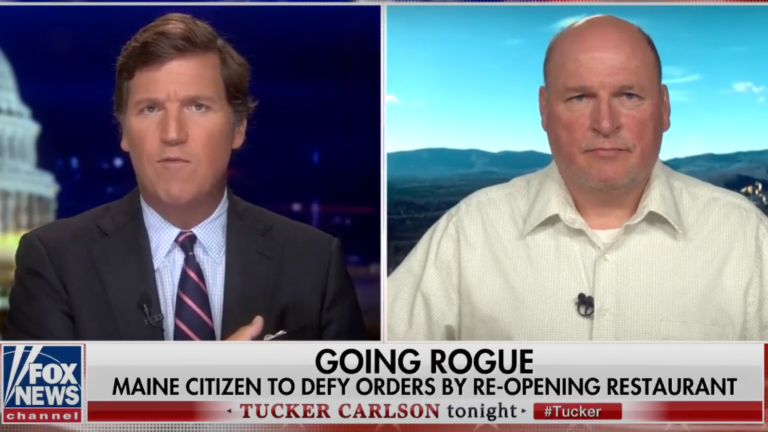 Restaurants are closed in Maine until June. But one owner vows to reopen despite the governor’s coronavirus plans.