Firefighters still respond in a time of need, and many double in operating ambulances and performing EMS work, but the face masks they’re using may not completely protect them from COVID-19.

Tests conducted at a lab within the Massachusetts Institute of Technology indicate that some KN95 masks, which in some cases are being used when the supply of recommended N95s runs out, are not as effective at filtering out harmful particles.

The U.S. Food and Drug Administration set a standard of 95 percent filtration for N95 masks, which are regulated by the U.S. National Institute for Occupational Safety and Health, or NIOSH, and are recommended by the FDA, NIOSH, and the U.S. Centers for Disease Control and Prevention. Some KN95s are filtering between 80 and 90 percent, according to the state, and some are lower, at 28 percent and 52 percent.

KN95s are regulated by the Chinese government. Under an emergency order, the FDA has allowed for the use of the masks in the U.S. if there is a shortage of approved N95 masks, and if the KN95s meet certain standards. The CDC also approves of their use as an alternative if certain criteria are met.

For those on the front lines of the COVID-19 pandemic, their use is worrisome. The Professional Fire Fighters of Massachusetts, which represents about 12,000 firefighters throughout the state, wants its members to know that if they are using a KN95, it may not work as well as an N95, according to president Richard MacKinnon Jr., the union’s president.

“We want to stress that our members should be in N95 masks, however, if because of the depleted amount of N95s, if they have to utilize the KN95s, that they at least know that they’re not to the standard of an N95,” MacKinnon told Boston.com in a recent phone interview.

In comparison, he did say the KN95s are more effective than a surgical mask.

That isn’t to say the men and women who operate ambulances or rush to put out fires will stop doing that.

“It’s almost like a time of war, you adapt and you do what you need to do to survive,” MacKinnon said. “We’re going to keep responding. We took an oath to protect the communities we serve, we knew there were risks and dangers taking this job.”

Of the 223 local fire departments that have firefighters who are members of the union, about 70 percent have fire-based EMS, MacKinnon said. This means that they also do ambulance and EMS transports in addition to firefighting.

Some departments also have paramedics who provide advanced life support, or ALS, and perform intubations and other life-saving procedures, according to MacKinnon.

“That’s why the need for our members to be equipped with an N95 mask is so important, just as is the health care workers in the hospitals as well,” he said.

Recently, MacKinnon heard from Cambridge firefighters who had KN95 masks tested at MIT. The results showed the masks filtered between 70 to 80 percent.

The state also conducted testing on KN95s there. The tests conducted at MIT were not accredited by NIOSH, the state said.

More specifically, MIT professor Gregory Rutledge, who has offered use of his lab to test the masks, said the testing “is not the equivalent” of what is done by NIOSH. However, he said the tests “are designed to mimic as closely as possible” what is done at a facility approved by the government.

While MIT’s testing can’t test if an N95 or KN95 seals correctly against the face, he told MIT News in a question-and-answer session that the lab can check for filtration as well as low pressure drop, both of which are needed for a mask to work correctly.

As of Thursday, Rutledge’s lab had tested over 40 different types of KN95s obtained from the Massachusetts Emergency Management Agency.

“We can compare their performance in our test to that of certified N95 respirators and quickly distinguish those that might pass the N95 certification from those that would not,” he said. “The latter group is still valuable in noncritical situations, but it is important to know that health care workers and first responders on the front line of the pandemic are getting the best available protection. “

“So far, about a third of the KN95s we’ve tested appear to perform as advertised.” he said.

Roughly 60 fire departments with union member firefighters had been sent KN95 masks as of last week, MacKinnon said. The union wants them to have true N95 masks, but they know they just may not be there.

“I don’t know if anyone could’ve foreseen the need for this kind [personal protective equipment] in the amounts we need,” he said. “I stress that, no one’s holding them back and saying you can’t have them. They’re just not there.”

Meanwhile, of the 12,000 represented firefighters, 191 have tested positive for COVID-19, MacKinnon said. Over 400 are in quarantine, and over 1,500 have been tested for the virus. Over 3,000 have been exposed to the virus so far.

There are places firefighters can stay if they choose to not go home after work and risk exposing their families, according to MacKinnon.

He also said returning to work has posed a challenge for some. A firefighter needs to be symptom-free for three days; they also need to test negative for COVID-19 twice before they can return to work. For some, this has meant being out of work for nearly a month because they continue testing positive without having symptoms.

Concerns have been raised in the past over the efficacy of KN95 masks, specifically the ones flown in using the New England Patriots’ team plane in April.

“It is not the gold standard,” Maryanne Bombaugh, president of the Massachusetts Medical Society, told The Boston Globe. “We know the N95 masks. We know how well they work, and what they filter, and the safety profile around them.”

“We just do what we can with what we have,” he said. 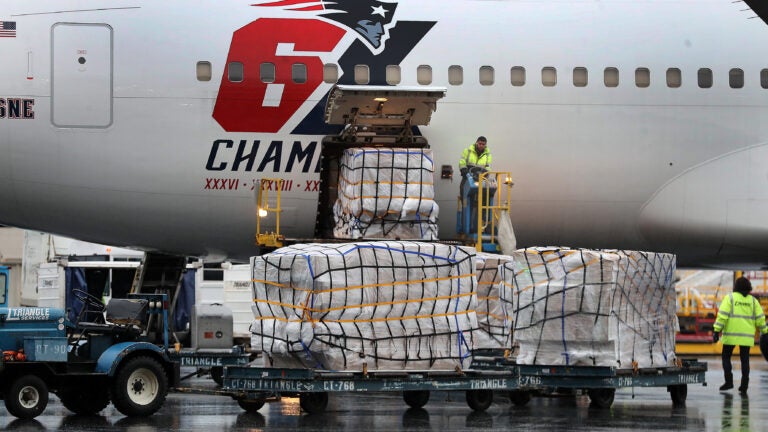