New Hampshire is facing two challenges as it eases restrictions meant to limit the spread of the coronavirus.

The virus itself and, as Gov. Chris Sununu likes to say, “our friends to the south in Massachusetts.”

Sununu announced a plan Friday to reopen businesses that had been ordered to close due to the COVID-19 pandemic in phases over the next few weeks, following positive signs that the state is containing the virus. However, it also comes amid concerns that a reopening could incite an influx of disease-spreading visitors from hard-hit Massachusetts, resulting in a rebound in cases in the Granite State.

“That’s concerning more than anything, to be honest,” Sununu said during a press conference Monday.

So far, New Hampshire has reported 2,588 confirmed cases of COVID-19 and 86 deaths due to the disease. While higher than the numbers in Maine and Vermont, both figures are fractions of the more than 69,000 cases and 4,000 deaths that have been reported in Massachusetts. Sununu is hoping to keep in that way.

“Now is not the time to be inviting or enticing folks out of Massachusetts to come up and either recreate or vacation up here in New Hampshire,” the Republican governor said.

According to his recently announced “Stay at Home 2.0” reopening plan, the state’s campgrounds, which have remained open, are now limited to New Hampshire residents and private members. The same holds true for the state’s golf courses, which will be allowed to open next Monday, May 11.

Sununu said the state’s coastal beaches will remain closed for everyone for the near future, given their “proximity to Massachusetts.”

“If we were to flex our beaches open, undoubtedly you’d have a huge influx from very infected areas on the North Shore and around Massachusetts,” he said during a press conference Friday announcing the plan.

And on May 18, the state will allow restaurants, which have been limited to takeout and delivery service, to begin hosting customers in outdoor seating areas (again, provided that tables are spaced six feet apart and limited to six people a table, and that servers wear face coverings). Sununu said he hoped to allow indoor dining “in the near future,” but cited a familiar reason for holding off for now.

“One of the challenges with restaurants right now is really our friends, just to the south, in Massachusetts,” Sununu said. “It’s not about blaming Massachusetts, but the reality is the two most northeastern counties of that state have the highest impact of COVID.” 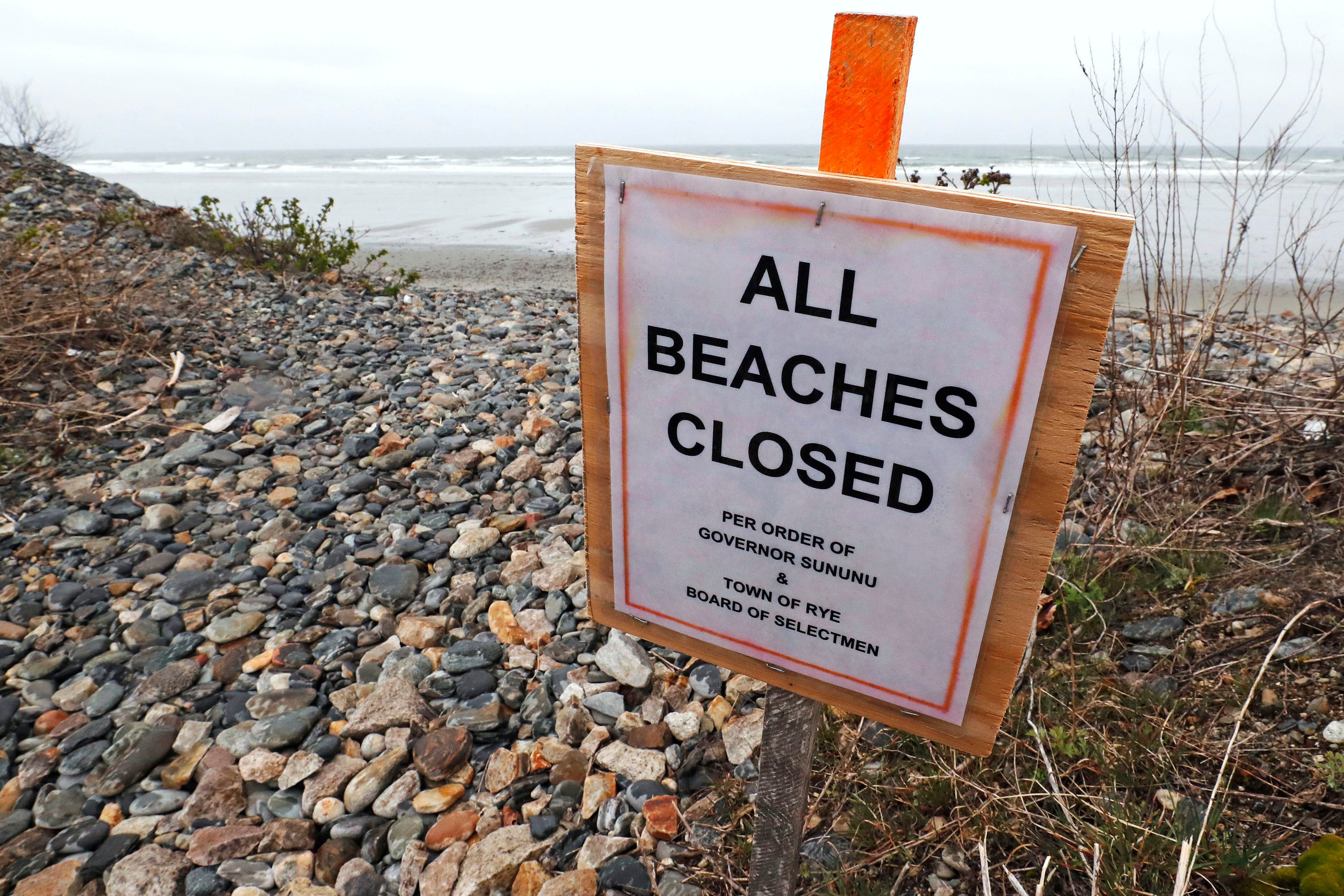 A sign notifies visitors that the beach is closed, due to the COVID-19 outbreak, in Rye, New Hampshire.

As of Monday afternoon, a combined 25,330 confirmed cases of COVID-19 had been reported in Middlesex and Essex counties, which had the first and third-most infections of all Massachusetts counties (Suffolk County was second, ahead of Essex). While most of the hard-hit communities (such as Chelsea, Brockton, and Lynn) are in the Boston area, working-class cities like Lawrence and Lowell, closer to New Hampshire, have also seen relatively high infection rates — each with more than 1,600 cases as of last week.

Sununu says that’s a concern for New Hampshire cities just over the border, like Nashua, Salem, and Hampton.

“Restaurants are a very enticing opportunity for folks from Massachusetts to come out,” he said.

Still, there are no residency restrictions for the hair salons and retail shops allowed to open next week. And presumably, the resumption of outdoor dining at New Hampshire restaurant patios and beer gardens on May 18 — at a time when Massachusetts Gov. Charlie Baker’s administration is scheduled to only be presenting its reopening plan — will look appealing to many Bay Staters.

Asked about those potential concerns, Sununu said he expects Massachusetts residents to follow Baker’s stay-at-home advisory, which does not restrict travel but urges residents to limit excursions for nonessential purposes (Baker recently extended the advisory until May 18).

“Whether you live in New Hampshire or Massachusetts, you’re healthier at home, and we expect Massachusetts residents will continue to abide by Governor Baker’s order,” Sununu told Boston.com in a statement.

During his press conference Monday, the New Hampshire governor dismissed the unprecedented idea of shutting down the border.

“We can’t put the National Guard on the border and keep them out of here,” Sununu said. “It’s not going work like that.”

Like Massachusetts, New Hampshire has urged — but not required — out-of-state visitors to self-quarantine for 14 days upon crossing the border. That hasn’t stopped Bay Staters (not to mention New Yorkers) from fleeing their densely populated states to rent homes or simply day trip in the Granite State’s scenic White Mountains or Lakes Region — sometimes to the ire of local residents.

During the early weeks of the outbreak, New Hampshire Fish and Game said that popular Monadnock State Park had seen “a surge in hikers with an estimated 90% of the hikers coming from out of state.” And despite the beach closures, Sununu said his “biggest concern” over this past sunny weekend was “cars coming up out of Massachusetts.”

“We saw a lot of folks coming over the border out of Salisbury into Seabrook and Hampton — a lot of Massachusetts cars,” he said Monday. “I mean, it was like bumper-to-bumper traffic and virtually all of them were Massachusetts license plates.”

While tourism is New Hampshire’s second-biggest industry, Sununu said reopening the sector too quickly would “invite that problem that we saw this weekend tenfold.”

“We love our friends there in Massachusetts, but now is not the time to be ignoring their state-at-home order,” he said.

New Hampshire isn’t part of the multi-state pact of Northeastern states from Pennsylvania to Massachusetts coordinating their respective reopening plans. According to Sununu, the state has made enough progress that a gradual reopening is appropriate. Officials in Vermont and Maine have already taken similar steps, as southern New England continues to try to get a hold of their higher caseloads.

Sununu commended New Hampshire residents Monday for mostly doing a good job obeying the state’s stay-at-home order and said the Baker administration has been a good partner in the response to the pandemic. He also expressed confidence that the numbers in both states would improve if they “have the discipline to ride this out a little longer”

“There’s a lot of good hopeful news that we’re on the right track, but anybody down there will tell you that it just takes a couple of outbreaks, a couple of missteps, and you can kind of be right back into this,” Sununu said.