State tax revenue dropped significantly in April, falling over 50 percent from both the Department of Revenue’s benchmark and from the amount collected a year ago, amid the financial fallout of the coronavirus pandemic.

Officials say the losses are thanks to a variety of factors, including the shift in the tax filing deadline, which was pushed from April to July 15 this year in light of the health crisis.

The DOR received 24 percent fewer income tax returns through April 30 than it did during the same period last year.

Dine-in service at bars and restaurants has been suspended through at least May 18 under an order from Gov. Charlie Baker. And with nonessential businesses closed, sales and use tax collections were down 17.7 percent last month, year over year, while the payment deadline for sales tax, meals tax, and room occupancy excise payments has been pushed to June 20.

“Most major categories of revenue were down in April and the shortfall in non-withheld income tax was the primary source of the below-benchmark performance in April,” DOR Commissioner Geoffrey Snyder said in a statement. “The April revenue shortfall is attributable to multiple factors, including adjustments to tax payment deadlines across several categories, the extension of the personal income tax filing and payment deadline, and the overall impact that necessary COVID-19 precautions have on economic activity.”

So what does that mean moving forward? There’s no easy answer.

“It’s hard to know,” Dr. Robert Murphy, assistant chair of the Economics Department at Boston College, said in an interview. “We’re all flying pretty blind I think in this situation, but absolutely there’s a hit.”

A heavy blow to local aid could leave town and city leaders scrambling to deliver essential services, according to Geoffrey Beckwith, executive director and CEO of the Massachusetts Municipal Association, which advocates for the needs of local governments across the commonwealth.

“There’s certainly a great degree of uncertainty about what the budget picture will ultimately look like,” Beckwith told Boston.com Friday.

If there’s a bit of good news, there’s this: Massachusetts has a particularly flush stabilization or “rainy day” fund that’s currently sitting around $3.48 billion — its highest balance since fiscal year 2008 and one of the highest in the country.

But legislators are also making moves to borrow cash as needed in the short term.

On Wednesday, the state House of Representatives unanimously passed a bill to give Goldberg’s office the authority to borrow any “necessary” amount — potentially around $3 billion — this fiscal year and pay it back by June 2021.

“Massachusetts won’t be able to borrow its way out of the recession … the borrowing just allows for a smoothing out of deficits,” he said.

Economic experts have said, meanwhile, that the state stands to lose between $4 billion and $6 billion in tax revenue from the pandemic fallout.

Beckwith, who estimates the financial ramifications of the crisis will impact the state through fiscal year 2022, said officials could tap into the rainy day fund to help with shortfalls, but added, “you never want to drain 100 percent of your reserves.”

Experts point to a need for federal funding

Beckwith, along with cities and towns across the country, is closely watching developments in Congress, where House Democrats are reportedly working on the latest response bill for the economic devastation of COVID-19 — one that is tailored toward local financial aid.

The bill initially floated could total $800 billion or more for small and medium-sized cities and towns and counties, although it could very well be lower after negotiations.

The money, if the bill is passed, would flow into every county in the United States based on population and an equal amount of funding for cities and towns.

Under the roughly $2 trillion CARES Act passed in March, $120 billion went to states to reimburse them for expenses from combating the coronavirus, while another $30 billion went to large cities, or those with more than 500,000 residents.

Murphy noted that the Federal Reserve has established the Municipal Liquidity Facility to help inject cash into communities by purchasing up to $500 billion of short-term notes from states, counties of at least 500,000 residents, and cities with populations of at least 250,000.

“I think the fed has moved quickly …. (and) I think that’s important,” he said.

Last month, state officials passed a law to ease budget requirements for municipalities, including deadlines, and to allow local officials to forgo the state approval process usually required to draw from reserve cash, according to the State House News Service.

But Beckwith said federal funding is needed to support critical local programs and services. If state revenues were to fall 15 to 20 percent and local aid was cut 15 to 20 percent, for example, communities would be forced to lay off “thousands and thousands” of public workers, from firefighters and police officers to teachers and other frontline workers, he said.

No one wants to do that, especially now, he said.

“They would have no options because communities need to have a balanced budget,” Beckwith said.

Murphy expects the hit at the state level to lead to salary and hiring freezes and project postponements, he said.

A “significant, direct” federal cash infusion to towns, cities, and states is “really the only solution to prevent widespread layoffs and service reductions,” according to Beckwith.

There are, of course, other avenues that can be pursued.

Passed last year, the law is slated to pump an additional $1.5 billion into school districts over the next seven years, starting in fiscal year 2021.

“After the fiscal impact of COVID-19, however, policymakers may need to modify the implementation schedule for this new law,” McAnneny wrote. “For example, lawmakers may postpone the start of implementation until fiscal 2022, presumably after the crisis caused by the COVID-19 pandemic has abated.”

While it’s still unclear what the total federal financial response to the pandemic may be, McAnneny cautioned against depending on any such aid too much.

“Over-reliance on federal funds may make fiscal 2021 easier but put the commonwealth on course for even more painful tax hikes or spending cuts in future fiscal years,” she wrote. “Similar risks are associated with using withdrawals from the ‘rainy day’ fund and lawmakers should tread carefully.”

The road ahead for the state budget

State lawmakers are developing what’s expected to be an atypical budget for fiscal year 2021.

On Thursday, Senate President Karen Spilka told the State House News Service though that the Legislature may need to pass one-month budgets in the meantime.

“We need to have some budget in some form by July 1, and there’s a lot of different possibilities,” Spilka said

“We could do short-term and longer-term. We could break it up,” she added. “Generally in the past when we have done a one-twelfth budget for the month of July in the next year, we use the prior year’s budget, which I do not believe we can do because the 2020 budget revenue will be bigger than the 2021. Hopefully, we can work very closely with the House and the administration and be on the same page and just really roll up our sleeves and get something done for the commonwealth.” 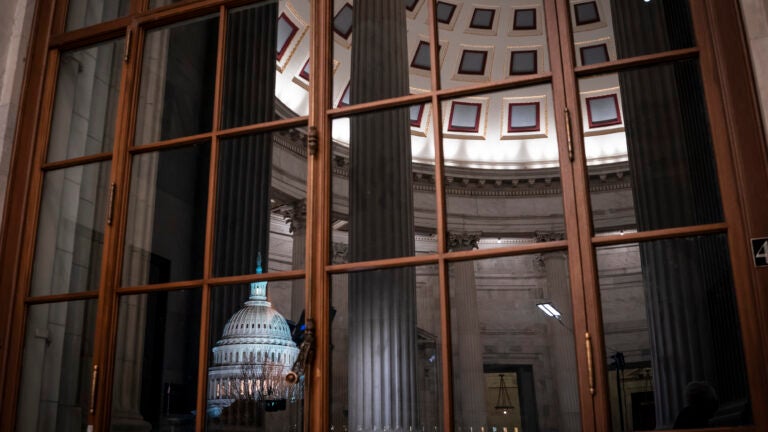 Treasury says April-June borrowing will be a record $2.99T