Public health and infectious disease experts have said it again and again — having expanded testing for the coronavirus is key for states to reopen safely amid the pandemic.

Yet widespread testing remains absent in most states across the country, and experts are warning against states reopening too quickly, fearing a “second wave” of infections. The Harvard Global Health Institute published new state-by-state testing goals, updating a previous model after researchers found that the need for testing in the United States has only increased.

The institute found that fewer than a dozen states had managed to get ahead of the virus, and that nationally, the United States should be doing at least 900,000 coronavirus tests daily by May 15 to reopen safely.

Over the last four days, coronavirus tests in the country have ranged between 277,894 and 394,711 a day, according to the COVID Tracking Project, with more than 9.3 million conducted since January.

“Ultimately, I am deeply worried that four, six, eight weeks down the road we’re going to find ourselves in the exact same place we were in in early March, and we will have to shut the economy down again,” Dr. Ashish Jha, director of the Harvard Global Health Institute, said in a statement announcing the institute’s updated models. “For states that look like they’re meeting their testing goals, I wouldn’t take that as too much comfort, because the number of cases will start going up. This is not the goal you want to hit and then say, ‘Ok, good, we’re done.’ This is the goal you want to hit and say, ‘Ok, now we can start.'”

In updating its testing simulator, the institute found that 41 states and the District of Columbia are not doing enough testing to safely reopen, including states with large outbreaks like Massachusetts and Connecticut.

Massachusetts is averaging “far fewer” than the minimum — 71,748 tests — that HGHI estimates is needed by May 15 to reopen safely. Currently, the state performs an average of 10,574 tests daily. As of Monday, 78,462 Massachusetts residents have been diagnosed with COVID-19 and more than 5,000 people have died from the virus.

Thomas Tsai, assistant professor in health policy and management at the Harvard T.H. Chan School of Public Health and a surgeon at Brigham and Women’s Hospital, told Boston.com the goal in updating the HGHI’s testing targets was to move from a simple focus on the number of tests being conducted towards a focus on what the strategy around testing should be, projecting numbers based on what is needed around an individual coronavirus case.

“The new numbers enable a testing strategy of test, trace, and supportive isolation,” he said. “And we are estimating that we need, for every new patient with COVID-19, at least 10 other tests available so we can adequately trace any potentially exposed contacts and make sure they get tested as well.”

The projected total number of tests are meant to “motivate” officials to develop strategies around testing that are proactive, rather than playing catch-up because of test shortages in February, March, and April that resulted in largely only symptomatic patients being tested.

“I think this information will help public officials have the infrastructure in place in terms of planning how many tests they may need to be performing,” he said. “But having a number of tests alone is necessary, but not sufficient for making sure that we can truly mitigate and contain the pandemic. Because they have to take those testing numbers, make sure they’re in place, and then more importantly be able to have the contact tracers coordinate with local public health boards or public health agencies, to move the testing from the hospitals, from the clinics, into the communities so those contacts can actually, truly be tested.”

A change in messaging

It’s not enough to have a strategy for reopening; states need tactics in place, such as contact tracing, in order to do so, so that there is a metric for guiding and measuring how effective the reopening plan is, the professor said.

Otherwise, there is real concern of seeing a surge in new cases.

“That’s really our main motivation, is that it needs to be based on actual empirical data — the number of cases, number of hospitalizations, number of deaths,” the Harvard professor said of the testing targets. “And the way to have that data is to make sure you have at the very minimum the capacity to perform those tests. Because that’s the easy part — the hard part is actually getting people testing. And that moving from defense to offense is going to be a challenge moving into the next several weeks to months.”

Another challenge that is essential to overcome for safe reopening, Tsai said, is that there has to be a 180-degree turn in public health messaging. People with mild symptoms and individuals with no symptoms were told to stay home in February, March, and April. But the opposite now has to be communicated along with increased testing — that people, regardless of the level of symptoms they are experiencing, should be getting tested to help gain an understanding if they may be an asymptomatic carrier.

“Social distancing has really bought us time,” Tsai said. “We flattened the curve, the hospitals for the most part have been able to increase their capacity and not be completely overwhelmed. But what we need to do is make use of this time that has been so dearly bought to prepare and train for the next stage.”

Testing also needs to move outside of medical settings, into communities, homes, and places of work in order to improve surveillance of asymptomatic people.

That will be a challenge, he said.

“How do we translate that on the ground level to making sure that we don’t just have a number of tests sitting in a tent or in a warehouse, we actually have tests that are being actively performed,” Tsai said.

Looking beyond the numbers

The target testing numbers are important, Tsai and his colleagues say, but there’s a greater context beyond tests that should also be evaluated.  The numbers should be taken directionally, not literally, the HGHI leaders staff wrote. Testing goals should be used as guideposts, and it is important to actually look at who is being tested, not just the numbers.

And states planning for reopening need to consider other factors beyond testing, such as a decline in new cases for at least 14 days. Regional compacts or consortiums for planning reopenings will be especially important with the lack of a national strategy, he said.

“The numbers are meant to spur the discussion around the strategy,” Tsai said of the testing goals. “Because the threshold is what makes a strategy possible. The specific strategy is going to vary state by state, county by county, but you can’t have a strategy if you don’t have enough tests to begin with. That’s been the problem for the last several months. We’ve been letting the shortages dictate our policy decisions instead of our policy decisions dictate the number of tests that we need.”

Massachusetts and the other New England states are all below the testing targets released by the institute, even as they each take steps for reopening. But Tsai reiterated that’s the point of testing goals — to motivate the next step and examine the broader context of infection control efforts in the states.

Massachusetts, he pointed out, has done an “incredible job” of stepping up manufacturing for the production of personal protective equipment, and he argued there is an opportunity in the state to ramp up its testing capacity and translate that ability into a surveillance strategy.

“Massachusetts really has the opportunity over the next weeks and months to be an example for the rest of the country,” he said. “And in fact many states are already looking to Massachusetts as an example.

“One clear [example] of that is the state has an incredibly transparent dashboard on the number of positive cases, where they’re coming from, what cities, what counties, what proportion come from nursing homes and long term care facilities,” he said. “Even the exact number of nursing homes that are being tested every day. So I think that incredible level of transparency is important, and more states need to replicate that. Because  I think as we phase in reopening over the next weeks and months, you need that same level of transparency metrics to communicate to individuals how the state is doing and if we need to dial up or dial back social distancing. But that needs to be driven by data.”

Massachusetts officials are due to release plans for the state’s reopening next week, but on Monday, Gov. Charlie Baker shared that it has already been determined that the Bay State will have a four-phased approach to restarting the economy. The governor has stressed that data on the outbreak of the virus in Massachusetts will drive the initiation — or delay — of each phase.

“We have to be flexible and honest about the fact that the timing and the details of these phases could change depending upon the track the virus takes as we go forward,” he said Monday. 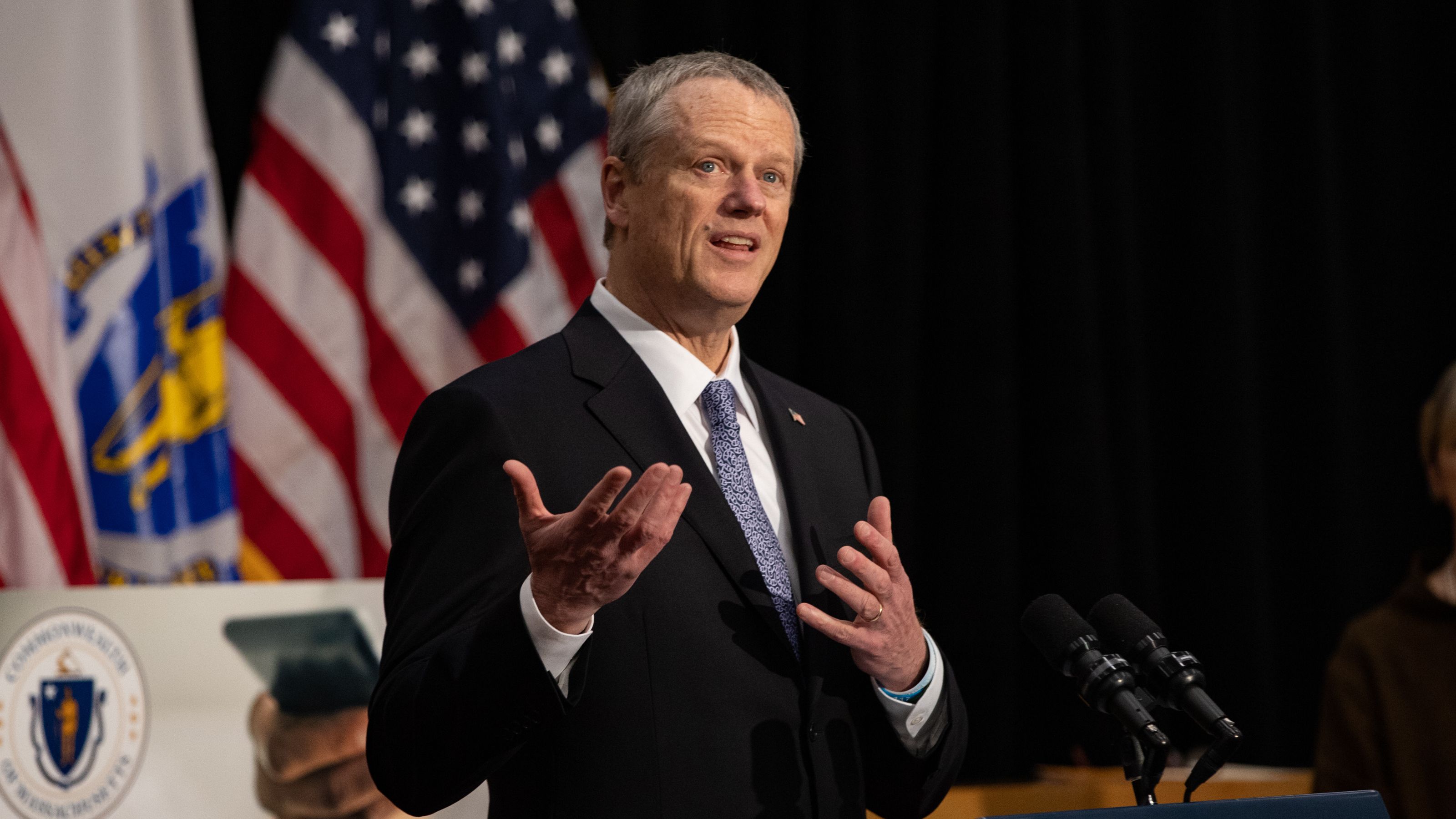 Gov. Baker announces the 4 phases Mass. will follow to reopen the economy