WASHINGTON — As hunger spreads across a locked-down nation, the Trump administration has balked at the simplest ways to feed the hardest hit, through expanding school meals programs and food-stamp benefits and waiving certain work requirements as unemployment reaches record levels.

Instead, the Department of Agriculture is focusing on giving states more flexibility to feed their citizens through regulatory waivers, many of which expire at the end of the month.

The Agriculture Department has issued waivers giving states more administrative power over the agency’s 15 nutrition assistance programs, which cover children, women and infants, and adults. The USDA also plans to send more than 5 million food boxes a week to children living in rural areas who would have difficulty getting meals still distributed at many schools.

Those waivers are modest: One allows school meals to be served outside of crowded settings; another allows meals to be distributed without some education activity. The department has allowed 24 states to receive additional assistance through an electronic transfer of benefits that accounts for the value of free and reduced-price meals that their children no longer receive because of school closures, an average of $114 a month per child.

And families in 23 states can use benefits from the Supplemental Nutrition Assistance Program, known as SNAP, to purchase groceries online. Other waivers have allowed states to issue emergency allotments that increase SNAP benefits to the monthly maximum for all beneficiaries. That has expanded food assistance for some working poor families but did not help the poorest, who already get the maximum benefit.

The department also has said it will send $16 billion to farmers, a group that President Donald Trump has long favored, and to purchase $3 billion in fresh produce, dairy and meat for food banks, community and faith-based organizations, and other nonprofit organizations.

“This is a challenging time for many people right now, and we are working every day to ensure all Americans have access to safe, affordable and nutritious food,” Agriculture Secretary Sonny Perdue said in a statement.

But many of those waivers expire at the end of May, although Congress gave the department waiver authority through September.

The department will not seek authority to reimburse local governments for meals that schools serve to hungry adults, informally rejecting a plea from California. It has turned away several state requests to waive the 20-hour weekly work requirement for college students seeking SNAP. The federal government has not moved to increase SNAP benefits by 15%, as Democrats have wanted.

And Tuesday it filed a notice that it would appeal a court ruling that blocked stricter work requirements for food stamps that were to take effect in April, stripping nearly 700,000 people from the food stamp rolls.

“It is hard to believe that this administration would still want to pursue a rule to take SNAP benefits away from hundreds of thousands of Americans during this unprecedented time,” said Chinh Le, legal director for the Legal Aid Society of the District of Columbia, which sued the department over it.

The hunger problems are likely to worsen for people like Rhoda Johnson in St. James Parish, Louisiana. Johnson, 60, used to walk with her four grandchildren to the end of their street in the morning to pick up milk and Frosted Flakes for breakfast and corn dogs and fresh fruit for lunch from a school bus that would stop there along its meal delivery route.

But the school shut down its meal program March 22 because an employee tested positive for COVID-19. “Now it is nothing, absolutely nothing,” Johnson said.

Her daughter uses her SNAP benefits, formerly known as the food-stamp program, to feed her children, but even before the pandemic, the benefits did not last the entire month. Johnson herself has depended on neighbors and friends who share their food.

“I don’t care if you’re on SNAP, on savings money, if you’re on work money, on unemployment money, whatever it is, it is a difficult time,” Johnson said.

The NAACP Legal Defense Fund has asked state officials in Louisiana and Alabama, where school meal sites have shut down, to look at whether those closures have a disproportionate effect on low-income and African American students.

Over Easter weekend, the Department of Agriculture, the Baylor Collaborative on Hunger and Poverty and companies such as PepsiCo began sending food boxes to students in rural areas, each with 10 shelf-stable breakfasts and lunches.

Jeremy Everett, executive director of the Baylor Collaborative, said the program, which started as a pilot last summer, scaled up quickly to meet the needs of impoverished, rural school districts. UPS has had to expand capacity to deliver the meals. Some of the communities receiving boxes might get as many shipments in a week as they usually get in year, he said.

Schools that continue to operate their meals programs have struggled to feed adults in the community who are increasingly desperate. Under current rules, the federal government does not reimburse meals served to adults unless they are disabled and receiving care from the school. In April, the California Department of Education asked the Agriculture Department to waive that rule, but the Trump administration says it does not have the authority to do that, a position it did not take when Congress refused to allocate any money for Trump’s border wall or secured legislation blocking arms sales to the Middle East.

As poverty rises, states are facing a crush of applicants for SNAP, and their websites are buckling.

Congress and a federal court have waived most SNAP work requirements during the emergency. But higher education students, sent home by their colleges and universities, still must find jobs to qualify for SNAP.

Again, a spokeswoman said the Agriculture Department “does not have the legal authority, which is set by Congress” to change that.

Democrats have proposed legislation giving the USDA the authority to issue waivers.

“Food insecurity was already a problem on college campuses across the country before the pandemic, and we need to get students help before it turns into a full-blown crisis,” Rep. Marcia Fudge, D-Ohio, chairwoman of the House Agriculture subcommittee on nutrition, said in a statement.

Many adults are turning to food banks. California has seen a 73% increase in food bank demand compared to this time last year. The Greater Cleveland Food Bank has served 15,000 new families since March 1, triple the total from same period last year.

Congress has provided additional funding through the Emergency Food Assistance Program, which many food banks rely on. The program distributes funding and food itself, which the banks can select based on their needs and capacity.

Food banks have yet to receive the additional funds, and they worry that they will not be able to store perishable goods from a new program of prepackaged food boxes.

The Agriculture Department has obligated just $99 million of the $850 million that Congress appropriated for the Emergency Food Assistance Program, Sens. Patrick Leahy, D-Vt., and Jon Tester, D-Mont., said this week.

The department also said it would send $3 billion worth of food to food banks, faith-based organizations and other community nonprofits. Farmers are struggling to adjust their distribution networks to redirect food that normally goes to restaurants and hotels to grocery stores and food banks.

Problems in the new Farmers to Families Food Box program have already surfaced.

Produce companies that were denied contracts sent a letter to the USDA demanding to know how the department made its decisions. Brent Erenwert, chief executive of Brothers Produce in Texas, said many of the companies approved do not have the capacity or the licenses to send the boxes out. One of the largest supplier contracts, for $39 million, went to an event planner.

Kristin Warzocha, president of the Greater Cleveland Food Bank, said that while she appreciated the food boxes, administering the program would be more difficult than the Emergency Food Assistance Program. The prepackaged boxes contain perishable food, which food banks may not be able to store.

“We are going to have a lot more use for refrigerated trucks,” she said.

The Federal Emergency Management Agency, which is tasked with supplying emergency meal kits or funding food distribution programs after disasters, has also forecast food shortages. In April, the agency published a memo outlining how it would support meal distribution through its public assistance program, which covers 75% of the costs.

Peter T. Gaynor, administrator of FEMA, said earlier this month that states were already asking the agency for assistance.

“It’s not widespread, but we see pockets of it,” Gaynor said. The federal funding for food distribution is “a tool that is made available to everyone, everyone that’s in a disaster.”

A USDA spokeswoman said the department would work with FEMA to ensure the program doesn’t duplicate assistance.

Earlier this month, FEMA announced $200 million in supplemental funding from the coronavirus stabilization law for grants through its Emergency Food and Shelter Program. A spokeswoman said a total of $320 million, which includes the $120 million appropriated by Congress, will be distributed beginning in early June to help address hunger and homelessness.

Democrats want FEMA to increase its share of the cost. And Leahy and Tester pointed out that just $5.8 billion of the $79 billion available in the FEMA Disaster Relief Fund, a potential source for food assistance, has been obligated.

“What do they do when there is a hurricane?” asked Katie Wilson, executive director of the Urban School Food Alliance. “That’s what they need to do here.” 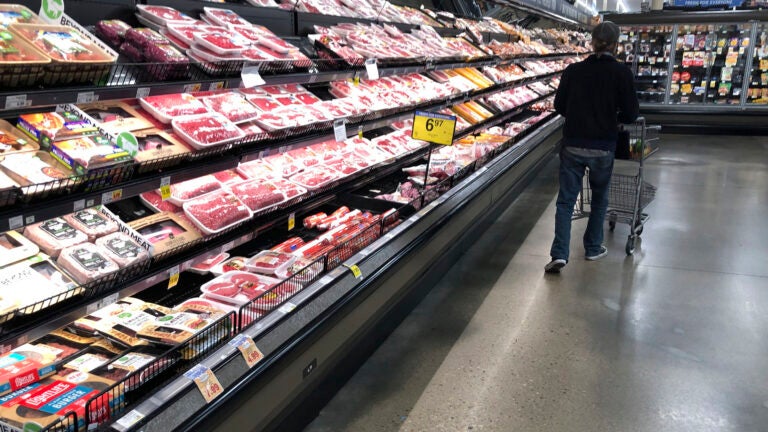