Jose Pascual, a critical-care doctor at the University of Pennsylvania Health System, recalled those first, mad days treating the sick when he had little to offer beyond hunches and Hail Marys. Each new day brought bizarre new complications of the novel coronavirus that defied textbook treatments.

“We were flying blind,” he said. “There is nothing more disturbing for me as a doctor.”

Now, for the first time since waves of patients flooded emergency rooms in March, Pascual and others on the front lines are expressing a feeling they say they have not felt in a long time – glimmers of hope. They say they have devised a toolbox, albeit a limited and imperfect one, of drugs and therapies many believe give today’s patients a better shot at survival than those who came only a few weeks before.

These are not therapies proved to kill or stop the virus. They range from protocols to diagnose and treat dangerous, but sometimes invisible, breathing problems that can be an early warning of COVID-19 in some people, to efforts to reduce the coronavirus-caused disease’s severity. They are still experimental approaches by doctors desperate to find ways to help gravely ill people and throwing everything they can think of at the problem.

Treatment options include the blood plasma of COVID-19 survivors, a rich source of antibodies that may help neutralize the virus; drugs to suppress the body’s own immune response, which some believe goes into hyperdrive as it tries to fight an invader; anticoagulants, which decrease the risk of deadly clots; and antivirals, such as remdesivir, the Gilead Sciences drug that recently won approval for emergency use from the Food and Drug Administration.

Randomized clinical trials are necessary to confirm early anecdotal data, with the results probably months away. But doctors say they believe they are seeing positive results from these and other things they have learned through trial and error these past 10 weeks.

“Things changed almost completely, from knowing nothing at all and going on hearsay from Milan, Seoul and Wuhan – to saying, ‘Well, this is something we know we can do,’ ” Pascual said.

The World Health Organization also sounded a note of optimism on Tuesday, saying it has seen “potentially positive data” in four or five coronavirus treatments and has planned additional studies to be able to make recommendations. “We do have some treatments that seem to be in very early studies limiting the severity or the length of the illness,” spokeswoman Margaret Harris said.

While doctors are a long way from having a full picture of the virus and its effects, “it is a different world today,” said David Reich, a cardiac anesthesiologist and president of Mount Sinai Hospital in New York City.

Medicine as a field evolves slowly. But during the pandemic, months have been compressed into days, decades into weeks. The knowledge accumulated during the past couple of months was due not to a single eureka moment but rather a steady stream of small discoveries.

Yogen Kanthi, an assistant professor of cardiology at the University of Michigan, said the medical community now has “a much better idea of what are the major contributors to death and are moving into the next phase of trying some more targeted treatments.”

As doctors have begun thinking of COVID-19 as an illness that causes clotting and inflammation problems, he said, the research has pivoted in new directions.

“Is there one medication that is going to do all that? My gut tells me it’s more a combination of things,” he said.

Kanthi and his rheumatology colleagues who focus on immunity issues are launching a study that will look at combinations of anti-inflammatory drugs and blood thinners to find out whether they work better together, as well as their optimal timing, dosage and mix.

Some other medications that have shown promise include the active ingredient in Pepcid, a heartburn drug. A study of 1,536 patients found that those who took it were more likely to survive, but researchers cautioned that it could have been a coincidence.

A study published last week in the Lancet medical journal found that a combination of three antiviral drugs – separately used to treat HIV, hepatitis C and multiple sclerosis – appeared to hasten recovery in some patients.

While the status of certain drugs has been elevated, numerous others – including those with toxic effects that could have been hurting patients – have been largely ruled out. This includes the use of hydroxychloroquine – the anti-malarial drug touted by President Donald Trump and given to coronavirus patients at many medical centers, even by doctors skeptical of the evidence but who had nothing else to offer.

Warnings in February about COVID-19 from the Centers for Disease Control and Prevention described a “pneumonia-like” illness making its way around the world. The health agency highlighted three symptoms: fever, coughing and shortness of breath. These first communications, used as part of the criteria for testing and as the basis for hospital preparations, reflected what was known at the time but sent the whole medical response awry.

Pascual recalled that as the five Penn Medicine hospitals readied themselves for a surge, they focused on the lungs. Ventilators were lined up in neat rows. Extra staff members were called in to train on emergency treatment of breathing complications.

But as the ICUs filled with COVID-19 patients, surprised doctors began to see dysfunction in other organs: kidneys, liver, intestines, skin, even the brain. Pascual called them “curveballs,” and there were a lot of them.

It was the same at medical centers in other parts of the United States.

In New York, Reich was doing rounds at the hospital just as its patient load was accelerating, and a critical-care doctor talked to him about how strange it was that the tubes in kidney machines were clogging. A few days later, he heard from a lung specialist who was seeing an unusual pattern of high carbon-dioxide levels in patients, even after giving them large amounts of oxygen. Then, a neurosurgeon called in about unusual clots in patients in their 30s and 40s.

About 200 miles north, at Brigham and Women’s Hospital in Boston, Mandeep Mehra, medical director of the heart center, and his colleagues discussed what he called “an interesting dichotomy with this infection.”

Most people, an estimated 80% to 85%, appear to fight it off without hospitalization while 15% to 20% become very ill.

“The main question is who are these people and how can we predict them,” Mehra said. “Very clearly, a few facts began to emerge, which is this disease is not just a disease of the virus. Something else peculiar happens to the human body where it creates a dis-regulated response.”

A change in protocols

Some of the ways doctors may be saving more lives involve simple changes to protocols that have been reinvented to reflect the idiosyncrasies of a new disease.

One of the most important involves diagnosing dangerous but often hidden lung problems.

Many doctors, nurses and EMTs have described being unsettled by patients showing up deathly sick yet without obvious signs of breathing trouble. Patients with “silent hypoxia” may have alarmingly low oxygen levels but show no shortness of breath. The problem results in pneumonia when the lungs are not getting enough oxygen but carbon dioxide is still being expelled. In the beginning, many of these patients were dismissed by primary-care doctors as having mild cases – until their bodies became so starved of oxygen that they lost consciousness and died. Now doctors are advising anyone suspected of having COVID-19 to use oximeters that clip onto the fingers to assess the saturation of oxygen in their blood, and staff members at some nursing homes are using them regularly to monitor their residents.

Physicians also have improvised new approaches to boost breathing support, including how ventilators are used.

One key finding is that a simple procedure of flipping patients onto their sides or stomachs in a process known as “proning” could return some people’s oxygen levels to normal. Doctors have said they believe this allowed a number of patients to avoid being put on ventilators. Once people are put on the breathing machines, complications can ensue, and it requires many more medications and staff to keep them alive.

Many hospitals also have overhauled the timing, concentration and flow of oxygen they use on patients, and some swear moving the timing of when they put patients on ventilators – whether earlier or later than they might have in the past – has made a difference.

Physicians also said they realized some patients were experiencing respiratory distress because their throats were inflamed and causing problems with ventilator tubes. This was easily fixed with steroids that reduce swelling.

A paper published by Mehra in the New England Journal of Medicine showed that ACE inhibitors, a drug used by millions of Americans to control blood pressure but that was stopped on many hospitalized patients due to worries it could exacerbate their illness, appeared to be safe when used on those patients.

Other discoveries have been grimmer.

Doctors began to see dangerous heart rhythm readings in patients who were on hydroxychloroquine and subsequently died. Many of these patients were critically ill with multiple organs affected, so the exact cause of death was unclear. But doctors were concerned enough that they backed off use of the drug weeks before a Veteran’s Administration study showed a higher risk of death; the Food and Drug Administration warned against its use on April 30.

Meanwhile, the results of tests of various drugs have come in quick succession: An HIV drug by AbbVie showed no improvement in a 199-patient clinical trial. An arthritis drug by Regeneron and Sanofi produced similarly disappointing results.

Some theorize that early failures of some drugs that target a hyperactive inflammatory response may be because those drugs tend to suppress just one in a broad category of cytokines, or proteins important in cell signaling. “It was like playing whack-a-mole,” explained the University of Michigan’s Kanthi. “You block one cytokine and then another one pops up.”

One challenge to therapies for COVID-19, Pascual said, is that the havoc caused by the virus seems to last a long time – in some patients two, three or even six weeks. Critically ill patients may need many different treatments in that period to stay alive – blood pressure medications for the heart, dialysis for the kidneys, ventilators for the lungs. If they can be kept stable for that length of time until doctors can remove the support of machines, he said, more patients might have a chance.

“The reassuring thing is this virus, like others, eventually burns out,” Pascual said. “In the end, it’s a waiting game.” 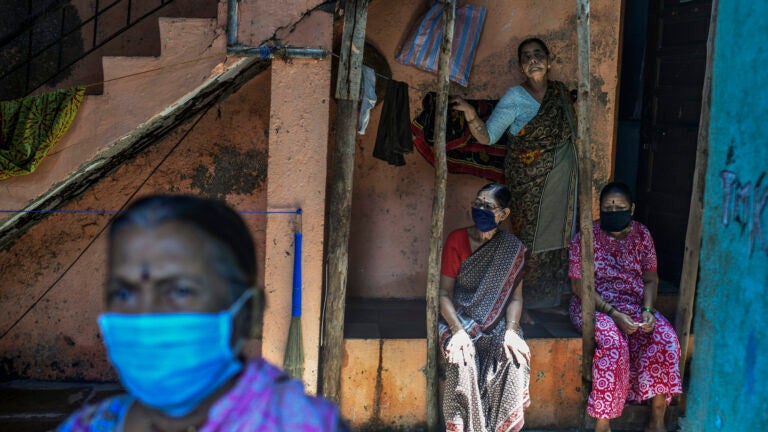 With pressure growing, global race for a vaccine intensifies