On Friday, one Cambridge gastropub reopened as a COVID-19 antibody testing site. That didn’t last long.

“… and scene,” began a Tuesday Facebook announcement from Wit’s End on the testing site closure.

The new, makeshift testing site, located at 1248 Cambridge St. in Inman Square, was closed due to a “zoning use challenge,” according to the post.

“We are attempting to work with [city officials] to get back open as soon as we can,” the post said. “Sorry to those who were looking forward to testing!”

…and scene. Due to a zoning use challenge from the City of Cambridge, we had to close. We are attempting to work with…

The venture prompted some questions and concerns among Cambridge city councilors during their meeting Monday night, including whether there would be more of these “pop-up” antibody test sites, as well as the city’s ability to regulate them.

“I felt that it was a little bit odd and quite honestly concerning to see a restaurant pivot from serving food to being a phlebotomy site,” Cambridge Vice Mayor Alanna Mallon said during the mostly virtual meeting.

In a statement on behalf of the city, a spokesperson said that the city’s Inspectional Services Department found that, via investigation, the site was in fact being used as a medical office “without a certificate of occupancy for the change of use having been obtained.”

“Staff ordered the medical office business closed until the owner demonstrates compliance with the City’s Zoning Ordinance and obtains a certificate of occupancy for the new use, in addition to any other licenses or permits required,” the statement said.

Hopping back about a couple of weeks, Wit’s End posted on Facebook April 30 that it was seeking a medical practice manager and offering to pay between $50,000 to $65,000 annually.

“Given the current coronavirus crisis, Wit’s End Testing (WET) is looking for a seasoned leader to manage all aspects of our clinical operations, with a strong emphasis on infection control, inventory management and medical staff compliance,” the post said. “Strong project management and organizational skills are critical, along with experience running a medical clinic, physician practice, or an urgent care.”

On Wit’s End website, after clicking past a popup announcing the closure and promising results to anyone already tested, the business indicates that the antibody testing was for anyone who may have been previously exposed to the virus but may have not shown symptoms; the testing was not for anyone with a COVID-19 diagnosis or anyone with symptoms.

The test cost $119, plus $50-$70 for a lab fee, the restaurant’s website says. The latter of the fees should be covered by insurance.

“We have cleaned, sterilized and re-organized Wit’s End to provide all patients a safe, quick, socially distanced care experience,” the website says. “Masks will be mandatory for all visitors and strict 6’ distancing guidelines are in effect. Furthermore, a very brief history and your temperature and oxygen levels will be taken upon arrival.”

And… Pivot! Being closed for months has caused so many serious challenges for restaurants, employees, communities,…

Wit’s End was recently featured in an article on LinkedIn as part of its “Beyond the Call” newsletter, published on Tuesday. The article detailed businesses that have changed their models during the pandemic. In it, Wit’s End owner Peter Stein explained how he had to layoff his employees after the eatery closed in the middle of March. Then came the idea to repurpose the space and partner with his brother, Dr. Benjamin Stein, who practiced in Manhattan — he obtained an emergency temporary medical license to practice in Massachusetts, a measure allowed under the current state of emergency, the state Department of Public Health confirmed via email to Boston.com.

“Stein hired back any interested employees: his bartender had gone to nursing school, and she made a great phlebotomist,” the article said. “His dishwasher became the cleaner. A server signed on as a medical assistant. He’s also hired several new employees to keep the place running.”

Peter Stein didn’t return a request for comment from Boston.com on Wednesday.

On Friday, the day of Wit’s End’s reopening, inspectional services staff visited the site, Cambridge City Solicitor Nancy Glowa said during the council meeting. Staff found a sandwich board sign outside that wasn’t permitted. That, as well as a sign in the window, were removed.

“With respect to the signage, we thought that that was important because there were reports of people queuing up outside and it seemed that was at least one component of trying not to add additional interest in people trying to use that site in that fashion,” Glowa told the council.

The city Health Department also contacted the state Board of Registration in Medicine on Monday to report the testing site. That complaint was sent off to the board’s enforcement arm, a Department of Public Health spokesperson confirmed. The business also isn’t allowed to tout itself as a clinic — it needs to be licensed by the state for that designation.

During the City Council meeting, Mallon also questioned the validity of the testing, adding that city officials “don’t know that much about this type of antibody testing.” A Washington Post article from mid-April notes that “dozens” of antibody tests were not reviewed by the FDA.

The makeshift Wit’s End Testing site is closed “until further notice,” the closure announcement on Facebook reads, while it works with the city. 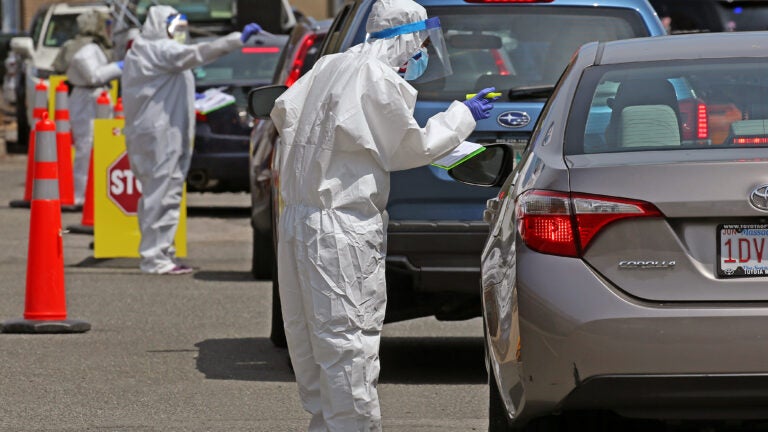