Boston officials Friday released the results of the coronavirus and antibody testing performed on 750 asymptomatic residents in some of the city’s neighborhoods hardest hit by the ongoing pandemic.

In other words, approximately 1 in 10 residents who took part in the study had developed antibodies — produced when the body has fought an infection, such as COVID-19 — and about 1 in 40 tested positive for the coronavirus, meaning they are “potentially infectious,” officials said.

“First, that the actions we took early on in this pandemic made a real difference in slowing the spread and, second, that the majority of our population still have not been exposed to the virus,” Walsh said. “This underscores what we already know, that we have to move cautiously and stay focused on what got us this far. This can be done by a gradual, phased-in approach to reopening that includes clear health criteria and safety guidelines for each industry and depends on testing and hospital metrics reaching certain benchmarks, and continuing to move in the right direction.”

Walsh, elaborating on the study’s results at a press conference Friday afternoon, said the antibody rate is “lower than what we would have expected from earlier models of the virus’s spread.”

Experts also cautioned that it is not known whether an individual who tested positive for antibodies would be immune to contracting the virus a second time. The antibody positivity rate could potentially be higher, but further testing is needed to determine that number, they said.

“I want to be clear that this is a sample of residents in four zip codes. It does not give us a defined, citywide picture,” Walsh said. “But the results do suggest some lessons about how we move forward.”

Dr. Peter Slavin, president of MGH, said the testing suggests approximately 90 percent of Boston residents have still not been exposed to the virus.

Planning for a safe reopening requires an understanding of just how far the coronavirus has spread in the city, he said.

“We also know that COVID-19 will be with us for a while,” Slavin said in a statement. “It is vital therefore that we be thoughtful and careful about reopening, and that we continue to take actions — wearing masks, physical distancing, working from home when possible, limiting gatherings — that can prevent another surge of the disease.”

Over 5,000 residents in Roslindale, East Boston, and within the boundaries of the Dorchester zip codes 02121 and 02125 were invited to voluntarily participate in the study earlier this month. Roughly 1,000 people expressed interest, and 786 were determined to be eligible, according to officials.

Of those individuals, 750 people enrolled and received testing. Anyone with COVID-19 symptoms or who had previously tested positive were disqualified from participating.

Testing occurred over a two-week period at three drive-through sites. Coronavirus testing was conducted through nose swabs, while antibody testing was carried out through blood drawn from finger pricks.

“Any resident who tested positive for the COVID-19 virus or the COVID-19 antibodies was provided with clear guidance and information on how to care for themselves and those around them,” officials said.

People of color represented over 55 percent of the overall outreach, although the majority, or 62 percent, of those tested were white, 18.7 percent were Black/African American, 12 percent were Latinx/Hispanic, 2.3 percent were Asian/Pacific Islander, and 0.13 percent were American Indian/Alaska Native, data shows.

“We ended up with a demographic cross section that was not a perfect match for our population, but it did draw significantly from each of our different neighborhoods and communities,” Walsh said.

Statistics released by the city have shown the coronavirus is impacting Black residents at a higher rate than white residents, although officials said the test results showed  “there were no significant differences in COVID-19 or antibody rates by race or ethnicity in this sample.”

Antibody rates yielded from the study also showed no difference among the occupations of participants, from frontline, essential workers to the swaths of the workforce currently doing business from home, experts said.

Walsh said Friday varying numbers between neighborhoods are an “indication of how localized the spread can be and how targeted our response needs to be and needs to continue to be.”

Boston had logged 11,395 coronavirus cases as of Thursday and had a total of 4,089 recoveries so far, with a continuing decline in the number of active cases, according to the mayor. So far, 551 city residents have died due to COVID-19 complications.

Officials said of those tested citywide over the course of the public health emergency, a total of 28 percent had tested positive as of last week.

Dr. Anthony Iafrate, director of the Center for Integrated Diagnostics at MGH, said the study results capture just a snapshot of the virus spread at one moment of time, and pointed out that the antibody rate is by no means near the 70 percent threshold estimated by medical experts that’s needed for “herd immunity.”

“We’re not there,” he said. “We’re not at the 70 percent, ‘We’ve all had it, we’re safe and past this.’ We’re also not at 1 or 2 percent, which you might expect in a more rural community … where the risk of transmission might be low. So we’re somewhere in between an environment where the transmission is low and the risk is low and where we have herd immunity — and that’s a fairly anxious place to be.”

And with Gov. Charlie Baker’s Reopening Advisory Board slated to release its initial plans for a four-phase reopening of the state’s economy Monday, Walsh said the city will not rescind its public health emergency notice nor lift related regulations.

“We must remain vigilant,” Walsh said.

Here are some key data points of the coronavirus and antibody testing study, provided by city officials: 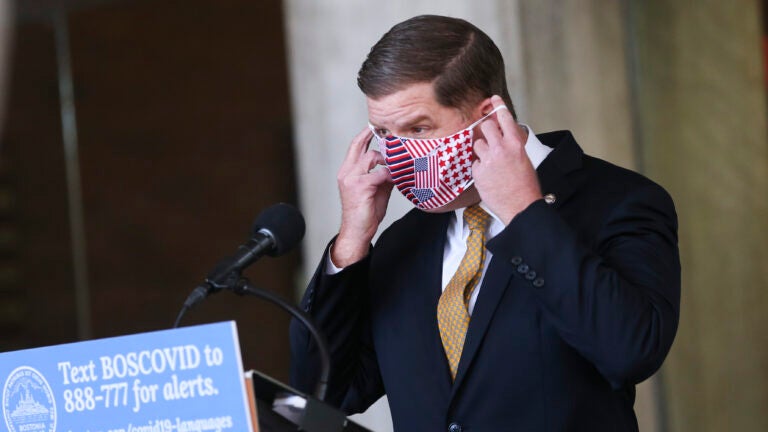