The reopening has, slowly, begun.

Gov. Charlie Baker detailed the first phase of his administration’s plan to gradually ease restrictions meant to blunt the spread of coronavirus on Monday, as Massachusetts continues to manage a high but declining caseload.

In addition to the essential businesses that have remained open during the pandemic, Baker’s plan allows construction, manufacturing businesses, and houses of worship to reopen immediately under new occupancy and safety standards Monday, with a raft of additional activities — from haircuts to office work to elective health care procedures — to resume next week, on May 25, under modified conditions.

“This guidance asks people to change behaviors, and it changes the ways some of our favorite places look and feel,” Baker said during a press conference Monday.

“This is not permanent,” he added. “At some point there will be treatments and ultimately a vaccine. But for the foreseeable future, everyone needs to continue to do the right things to bring the fight to the virus so that we can continue to move forward.”

Each phase will last a minimum of three weeks, but could go on for longer, depending on public health data trends, according to the reopening plan. They will also potentially include updated guidance for activities that were allowed to resume during the previous phase.

Baker also announced a new “Safer-at-Home” advisory in conjunction with the first phase of the plan, advising residents only to leave their home for the newly permitted activities.

The plan comes after several weeks of promising downward trends in the rate of positive COVID-19 tests and hospitalizations, though Massachusetts remains one of the country’s most hard-hit states by the pandemic. As of Sunday afternoon, Massachusetts had reported 86,010 confirmed COVID-19 cases and 5,797 deaths due to the disease — the fourth and third most in the country, respectively. But the number of hospitalizations and new deaths announced in the state’s report Sunday were the lowest since early April.

The Baker administration is also working to aggressively scale up testing capacity in Massachusetts, though some health experts say it’s still short of what it needs to safely reopen. Some Democratic state lawmakers and advocacy groups for frontline workers have also expressed concern that the state is moving too quickly.

In order to minimize unintended consequences, Baker is coordinating his administration’s four-phase reopening plan with reopening moves in neighboring New England states, which have already begun rolling back restrictions on everything from restaurants to retail stores to hair salons. New Hampshire and Rhode Island began allowing limited-capacity outdoor dining on Monday; Connecticut plans to do so Wednesday. 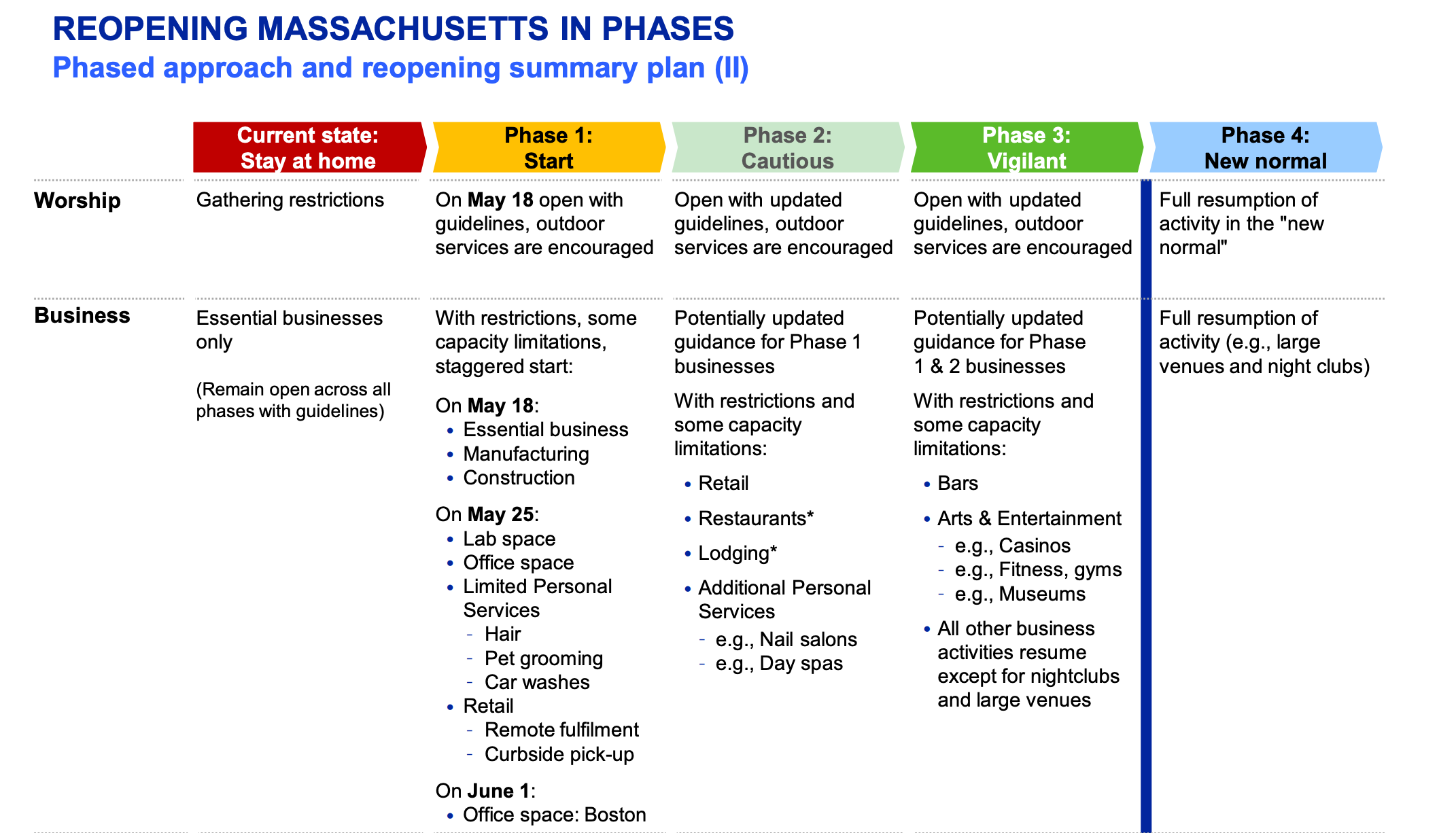 Religious institutions — such as churches, temples, and mosques — can reopen for in-person services at 40 percent capacity, including both attendees and staff. And while members of the same immediate household can sit together, they must be seated at least six feet away from other congregators. The safety standards also say that some rows should be blocked off and kept empty to ensure sufficient distancing. Everyone over the age of 5, except those with a medical or disabling condition, are required to wear a mask inside the building.

Construction and manufacturing businesses can reopen if they implement new distancing protocol, stagger break times, and limit face-to-face interactions. The standards say that construction crews should avoid handshaking and should not convene meetings of more than 10 people.

While the Baker administration is strongly encouraging businesses to allow employees to continue to work remotely, the plan does allow nonessential office spaces to reopen at 25 percent capacity on May 25 — except in Boston, where they will be allowed to reopen on June 1. Labs across the state will be allowed to reopen on May 25, under specific safety standards. For both offices and labs, the sector-specific guidelines direct businesses to stagger work schedules and reconfigure common spaces to allow for physical distancing; work cafeterias should only provide prepackaged food.

During the press conference Monday, Housing and Economic Development Secretary Mike Kennealy also said employers should accommodate workers who are over the age 65  — or have underlying health conditions that make them vulnerable to the disease — with work-from-home assignments to limit their exposure to the disease.

Hair salons and barbershops can reopen for haircuts, color, blow drying, and treatments on May 25, while eyebrows and beard trimming, lip waxing, and manicures remain prohibited during Phase 1. Car washes and pet groomers can also reopen on May 25 (though the former can only offer exterior car cleanings).

Retail stores, including clothing shops and recreational marijuana dispensaries, can also open for curbside pickup on May 25.

The Baker administration also recently eased restrictions to allow nonessential retail businesses to let some employees back for remote fulfillment orders, though adult-use marijuana shops — which were controversially forced to close during the outbreak — cannot offer delivery for the time being.

Drive-in movie theaters will also be allowed to reopen on May 25.

In-store shopping will remain prohibited during Phase 1. And restaurants can continue to only offer takeout and delivery. According to the state’s reopening plan, those businesses could be able to welcome customers in Phase 2 of the reopening, with certain restrictions and capacity limits. The same goes for hotels and additional personal service businesses, like day spas and nail salons. 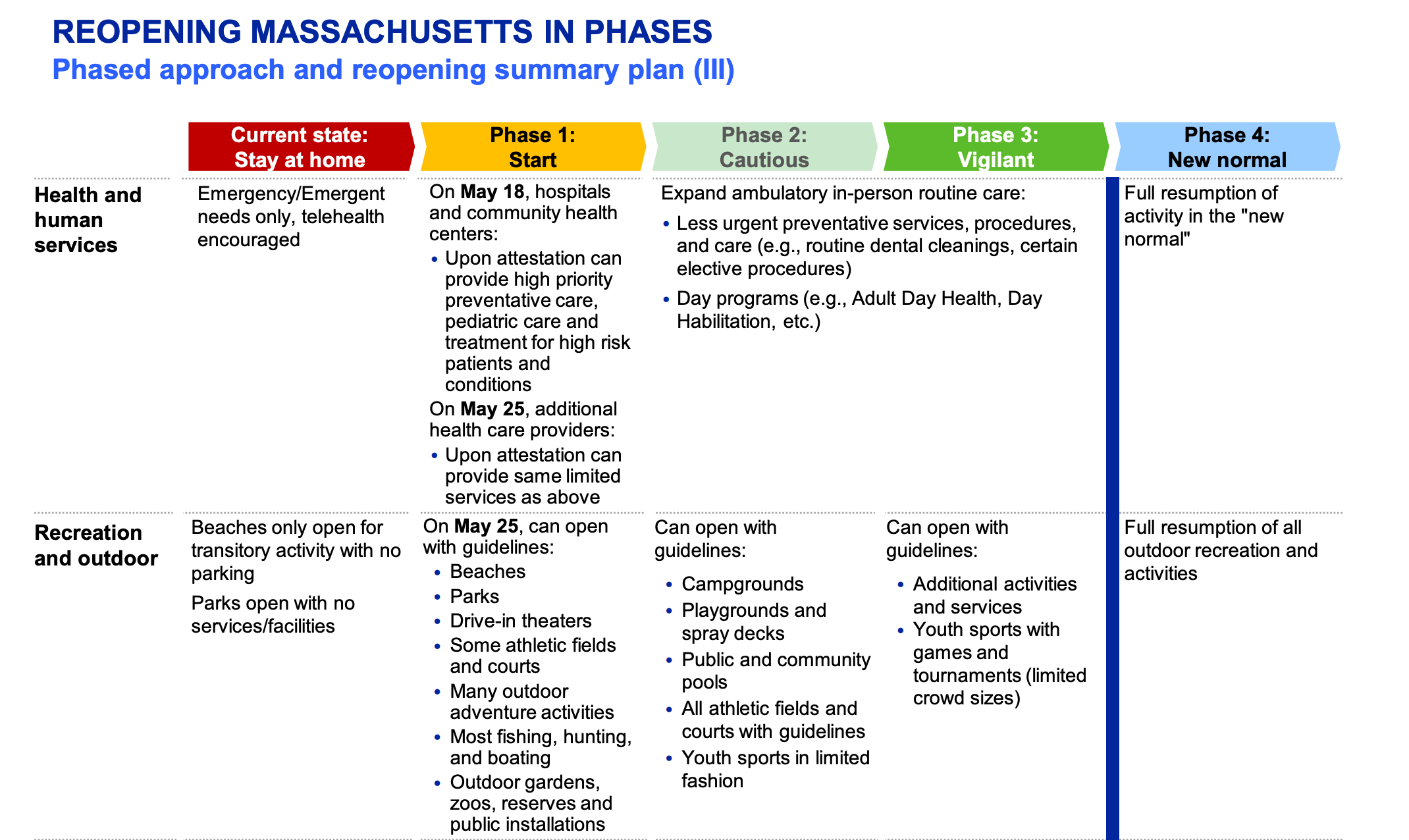 As part of Phase 1, hospitals and community health centers with sufficient capacity can resume non-emergency preventative services on Monday, such as pediatric care, screenings and preventative treatment of high risk patients and conditions. Additional healthcare providers can begin offering those services on May 25.

However, routine adult exams, dental cleanings, and most other elective non-urgent procedures, such as joint replacements and back surgeries, should not resume during Phase 1, according to Department of Public Health guidance.

Beaches, parks, and other open spaces will also be allowed to reopen on May 25 for activities other than just walking, jogging, and biking.

However, groups of more than 10 and organized, pick-up games remain banned. Athletic fields will be allowed to be used for certain non-contact sports with no shared equipment, such as tennis, as long as participants wipe down equipment before and after playing. And beachgoers are required to keep 12 feet between blanket groups and parking lots will be managed to limit crowding.

The reopening plan foresees campgrounds, playgrounds, and public pools reopening with their own guidelines as part of Phase 2, which will also allow youth sports to resume in a limited fashion.

The MBTA will continue to operate reduced service during Phase 1 to serve essential workers and the businesses that do reopen. And K-12 school buildings will remain closed through the end of the year. The administration says plans for the 2020-2021 school year are still being developed and will be announced soon.

The plan for when child care centers and summer camps will start up remains to be seen, meanwhile, with the Baker administration “continuing to work on creating what we would call the appropriately safe operating model for child care going forward,” Baker said during Monday’s press conference.

The reopening plan also notes that specific industries — or the entire state — may need to return to a previous phase if the public health data trends significantly worsen. However, Health and Human Services Secretary Marylou Sudders, who has led the state’s coronavirus response, noted Monday that an uptick in coronavirus cases is expected to a certain degree.

“As we begin to reopen, we must be prepared for an increase in new cases,” Sudders said, adding that the state hopes to be able to manage any through testing and contact tracing.

Toward the ‘new normal’

Under the state’s reopening plan, the highest-risk businesses — where people are likely to congregate in close contact with each other — will continue to remain closed until at least the summer. Bars, casinos, fitness centers, gyms, and museums are all listed under Phase 3, which won’t begin until late June at the earliest.

At that point, virtually all businesses will be allowed to reopen under new operating guidelines, except for large venues like sports arenas, concert venues, movie theaters, and nightclubs.

The fourth and final phase — dubbed the “new normal” — would be triggered when a vaccine or effective therapy is developed and made available.

During Phase 1, gatherings of more than 10 people continue to be prohibited and people who are at high risk of hospitalization due to COVID-19 are urged to stay home except except for essential errands, like the grocery store and to attend to healthcare needs, according to the new Safer-at-Home advisory.

Despite the much-anticipated announcement Monday, Baker said the state’s guidance wasn’t all that different than the stay-at-home advisory that has been in effect for roughly eight weeks.

“It’s not a dramatic departure from where we were, but it does reflect the fact that we are pursuing, at this point, at phased reopening strategy,” he said, stressing the everyone over the age of 2 should continue to wear a face covering when they can’t stay six feet away from others.

In addition of the deep economic impact, Baker noted that “tens of thousands” of Massachusetts residents have suffered personal loss due to COVID-19.

“The toll this virus takes — and continues to take — is staggering,” he said. 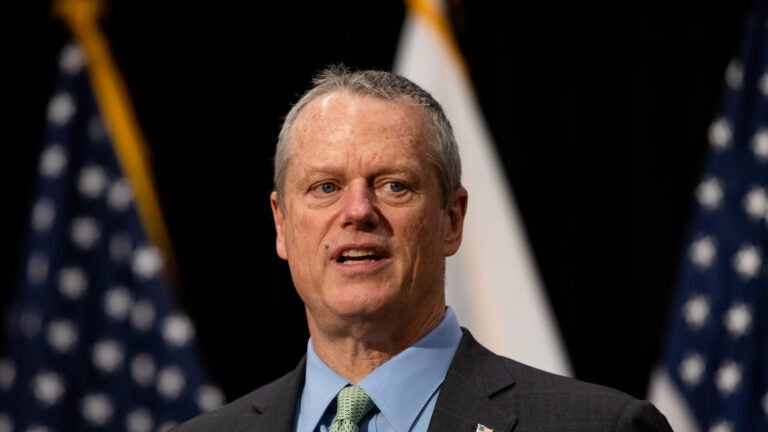