Retail stores in Massachusetts will be able to reopen next week as the state relaxes coronavirus restrictions  — but customers still can’t go inside.

Gov. Charlie Baker announced Monday that nonessential retail stores will be allowed to open for curbside pickup, as well as remote fulfillment, on May 25 as part of the the first phase of his administration’s reopening plan. The Republican governor called curbside pickup a “viable and attractive option,” given the declining-yet-still-high number of COVID-19 cases in Massachusetts.

Small business groups say it may be too little, too late.

Jon Hurst, the president of the Retailers Association of Massachusetts, tweeted Monday that he was “incredibly disappointed” with Baker’s announcement.

Every neighboring New England state will begin allowing customers inside brick-and-mortar stores this week under strict capacity limits and other distancing safeguards. And stores that primarily sell jewelry, clothing, and shoes — which have been closed for nearly two months — “don’t lend themselves to curbside selling situations,” according to Hurst.

“Many small businesses are at the end of their economic life lines,” he told Boston.com in an email Monday.

The National Federation of Independent Business, which represents more than 5,000 businesses in Massachusetts, echoed that sentiment Monday. Christopher Carlozzi, the local NFIB state director, said the news Monday could be a “life preserver” for small businesses — but only for so long.

“Retail shops will not last very long with curbside pickup only,” Carlozzi said in a statement. “The state must allow customers in stores sooner rather than later.”

According to the state’s reopening plan, Phase 1 will last for a minimum of three weeks, if not longer, depending on the state’s data on positive COVID-19 test rates, hospitalizations, and deaths. According to the plan, in-store shopping could begin during Phase 2.

Carlozzi said small businesses in Massachusetts have faced “every challenge imaginable during this pandemic,” from the closure orders to obtaining federal relief loans to competing with expanded unemployment benefits — not to mention the loss of ground to online retailers and big national chains like Walmart, which were allowed to stay open since they sold essential goods, like food or work supplies.

They have also announced plans to allow limited in-store shopping. As of Monday, New Hampshire, Rhode Island, and Vermont allow in-store retail shopping with varying capacity limits. Connecticut plans to follow suit Wednesday. And in Maine, limited indoor shopping has been allowed in its 12 rural counties since May 11, with plans to allow it statewide by June 1.

“The point is [Massachusetts] has been continually two steps behind other states in the region as it relates to retailing, and those restrictions do not make either economic sense, or scientific sense,” Hurst said, noting that Massachusetts effectively allowed curbside pickup for restaurants, but not for certain non-food retailers.

“Next week we will get what should have been granted weeks ago,” he said.

Baker has said there’s good scientific reason for his administration’s “go-slow” approach: Massachusetts has had — and continues to have — significantly more COVID-19 cases and deaths than other New England states. Additionally, scientists and health experts agree that the risk of contracting the coronavirus is significantly lower outside than it is indoors.

“The whole point behind curbside is that it doesn’t require people to go inside and stand around,” Baker said during his press conference Monday. “There’s plenty of evidence at this point that inside spaces with a long period of time in which people are there, especially if they don’t have the ability to socially distance, is probably the biggest and most significant opportunity for spread.”

State officials say a spike in cases could force them to reimplement shutdown orders, as well as negate the costly sacrifices that residents and businesses have already made to limit the disease’s spread.

Still, Hurst sees an inconsistency in the state’s approach. Under Phase 1 of the reopening plan, offices and certain personal services — like hair salons, barbershops, and pet groomers — will be able to open on May 25 if they follow certain social distancing protocols. For example, nonessential office spaces will be allowed to reopen at 25 percent capacity (except in Boston, where workers will be allowed back one week later on June 1). Hair salons and barbershops can bring back customers only on appointment basis.

Hurst says that Baker need to explain why a close-contact haircut or a 25 percent filled office is safe, “but not limited customer service in a store, even by appointment only, or at 25 percent capacity?”

So far, he hasn’t gotten a sufficient explanation. 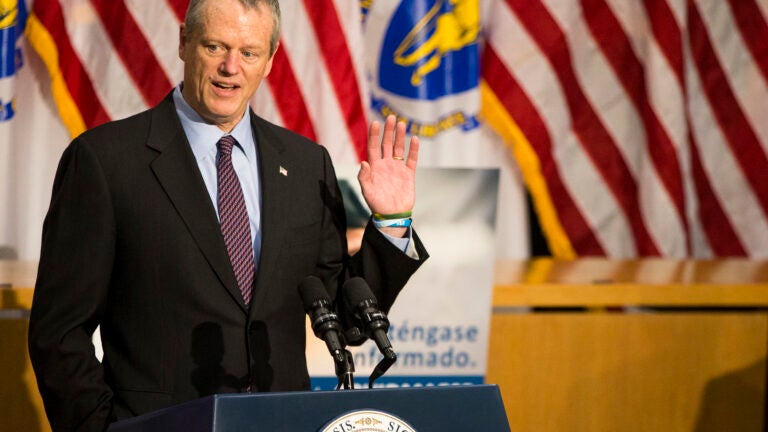