RUTLAND, Vt. (AP) — The owner of a Vermont fitness center who was ordered by a judge to close amid the coronavirus outbreak reopened Tuesday after moving exercise equipment outside into the parking lot as an outdoor facility.

“The goal here is that people are able to continue to work out for their mental, physical and emotional health,” said Sean Manovill, owner of Club Fitness of Vermont in Rutland. It’s not a political statement, he said.

The Vermont attorney general on Friday had sued him and the club for staying open in violation of state rules, and a judge hours later granted a temporary order barring the gym from operating.

A police officer said he saw people exercising without masks and not staying 6 feet (2 meters) apart, the office said. He also did not see any hand-sanitizing stations or signs advising people to wear masks, to maintain social distance or to clean equipment, it said.

Manovill disputes the police accusations and said he closed after getting the judge’s order on Saturday. On Tuesday, he reopened as an outdoor fitness center in the parking lot and said anyone can come and exercise for free. About eight club members showed up by the afternoon, he said.

Elizabeth Brown said she’s been working with a Club Fitness personal trainer since October to be healthier. When the gym closed she realized how important her workouts had become because she started getting depressed, she said.

“When I found that this was opening again, it was like one of the best moments I can say this year because, great, we’re going to start getting healthy again, feeling better, my attitude got better, everything got better,” she said.

The attorney general’s office did not return an email seeking comment.

Visit Carlos Correa weighed in on Eduardo Rodriguez's celebration toward him 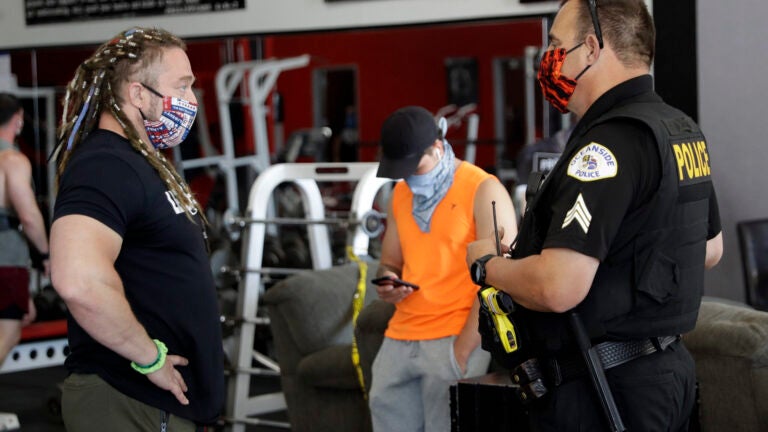