Lucy Li tries not to let fear dictate her interactions with patients as she makes the rounds in the COVID-19 intensive care unit. But the anesthesiology resident at Massachusetts General Hospital cannot erase the memory of what happened after work at the start of the pandemic.

A man followed the Chinese-American doctor from the Boston hospital, spewing a profanity-laced racist tirade as she walked to the subway. “Why are you Chinese people killing everyone?” Li recalled the man shouting. “What is wrong with you? Why the f— are you killing us?”

Stunned at first, then relieved she was not physically attacked, Li is now saddened and angered by the irony that she spends her days and nights helping save lives. Her work inserting tubes in patients’ airways has grown riskier since the coronavirus emerged — each procedure releasing droplets and secretions that could carry viral particles.

“I’m risking my own personal health, and then to be vilified just because of what I look like,” said Li, 28, wary that one of her patients, too, could harbor such prejudices. “I try not to think about that possibility when I’m at work taking care of patients. But it’s always there, at the very back of my mind.”

Across the country, Asian-American health-care workers have reported a rise in bigoted incidents. The racial hostility has left Asian-Americans, who represent 6 percent of the U.S. population but 18 percent of the country’s physicians and 10 percent of its nurse practitioners, in a painful position on the front lines of the response to the coronavirus pandemic. Some COVID-19 patients refuse to be treated by them. And when doctors and nurses leave the hospital, they face increasing harassment in their daily lives, too.

Asian-Americans have experienced a sharp increase in racist verbal abuse and physical attacks during the pandemic, with the FBI warning of a potential surge in hate crimes against Asians as the coronavirus death toll mounts and stay-at-home orders are lifted.

“People are worried about transmission of a disease that they associate with foreignness and Asian faces,” said Grace Kao, a Yale University sociologist. “Nothing erases what we look like.”

There is no comprehensive data measuring anti-Asian bias during the pandemic. An analysis of self-reported incidents by Russell Jeung, chairman of the Asian-American studies department at San Francisco State University, shows a steady rise in reports of harassment and assault against Asians since mid-March, with twice as many women than men saying they have been mistreated.

Jeung, who is researching racism and xenophobia amid the pandemic, said a multilingual website set up by his department in a partnership with civil rights groups to document anti-Asian harassment has recorded more than 1,800 reports since its March 19 launch. Victims said they were spat on, stabbed while shopping, shunned for wearing masks and barred from entering ride-hailing vehicles.

Some academic experts on race say President Donald Trump’s rhetoric around the virus and China has contributed to the rise in racial harassment. For weeks, Trump deliberately referred to the coronavirus as the “Chinese virus” despite guidance from public health officials to avoid attaching locations or ethnicity to a disease. He has since tweeted that Asian-Americans are not to be blamed for the virus’ spread.

“Words matter. People are making that close association between the virus and Chinese people because he insisted on using that term,” Jeung said.

During a media briefing last week, Trump lashed out at CBS News White House correspondent Weijia Jiang, who is Chinese-American, telling her to “Ask China!” after she questioned him on why he insisted on making testing a global competition at a time when so many lives are being lost. Jiang previously tweeted that a White House official had called the virus “the Kung-Flu” to her face.

White House adviser Peter Navarro, in an ABC News interview Sunday, accused China of sending “hundreds of thousands of Chinese” to “seed” the coronavirus around the world. And Sen. Ben Sasse, R-Neb., drew criticism after he blamed the virus’ spread on “thugs in China” in a high school graduation speech over the weekend.

Jeung said he expects harassment and violence against Asian-Americans to grow in coming months as states reopen their economies and people return to work, school and public life.

“With the China-bashing and with the economy tanking and more deaths from COVID-19, we expect anti-Asian bias to only increase,” Jeung said. “People make automatic assumptions, especially in times of threats, and go into fight-or-flight mode. The fight mode is attacking or harassing Asians, and the flight mode is shunning Asians.”

Former Democratic presidential candidate Andrew Yang has encouraged Asian-Americans to step up and “show our American-ness in ways we never have before,” in response to the rise in racist abuse. In a controversial op-ed last month, he called on Asian Americans to be part of the “cure.”

But many Asian-Americans felt offended by seemingly having to justify their existence. “It shouldn’t matter if you’re a front-line worker,” said Esther Choo, an emergency-room physician in Portland, Oregon, who hosts a podcast on the coronavirus pandemic. “Every time something like this happens, there’s this wave of, ‘But we’re so good, and we don’t deserve this.’ No, you don’t deserve this because you’re human.”

Being a front-line worker didn’t help Li — and when she texted her colleagues to warn them before they left work, one of them responded with her own story of being harassed just a week earlier.

Gem Manalo, a Mass General anesthesiology resident who is of Chinese and Filipino descent, was riding the T across the river to Cambridge for a yoga class in early March when she said a man starting yelling: “F— China! F— the Chinese!”

“I was too scared to look at him,” said Manalo, 29. A stranger recorded the incident with her phone and assured Manalo that she would defend her if the man tried to physically harm her.

“He kept saying things like: ‘You people eat bats! Watch my YouTube channel tonight, and I’ll tell the real story.’ He kept saying: ‘F— China. F— the Chinese,’ over and over,” Manalo said.

“Here I am in the hospital, working in all these makeshift ICUs,” Manalo said. “We’re all at a loss, too, trying to come up with new protocols to keep everybody safe, and this guy is telling me that I am terrible.”

Audrey Li, an internal-medicine resident at Beth Israel Deaconess Medical Center in Boston who plans to specialize in infectious diseases, said she was repeatedly told by a frustrated patient at another hospital to “go back to your country.”

Li was too shocked to respond and immediately wondered if she had done something wrong. But a white intern told the patient that her comments were unacceptable.

“Part of the unsettling piece of racism is you’re never sure if it’s something you as an individual did or if it’s something that’s immutable and larger than yourself,” Li said. “There was a sense of a little bit of guilt and shame for having forgotten what it was like to be marginalized in that way.”

In Los Angeles County, Hengky Lim, a 44-year-old nurse practitioner from Indonesia, said he approached an ER patient who had a fever and a cough to show him how to put on a mask one night in March. The patient yelled at him and coughed in his face, spit splattering on his plastic face shield. “You know where coronavirus is from? It’s from you people! I don’t want to be seen by you,” Lim recalled the patient shouting. Then the patient walked out of the ER.

In April, when Lim, dressed in a hazmat suit, was treating patients with COVID-19 symptoms in a tent outside the main hospital, he said a man who came in with chest pain, difficulty breathing and a persistent cough declined Lim’s assistance and returned to see the nurse who had taken his vitals. That nurse, who was white, later told Lim that the patient said he did not want to be seen by an Asian provider because he thought he had contracted the coronavirus from a Chinese man coughing near him at a store, Lim recalled.

“I asked the nurse, ‘Are you sure it was a Chinese man?’ It’s just stereotyping, assuming everyone who is Asian is Chinese and has coronavirus,” Lim said. He tried to treat the patient anyway, telling him that he was his only choice and that he would take care of him. But the man left after spitting into a cup for the coronavirus test – and did not bother getting the X-ray or EKG that Lim had ordered for him.

Lim said he had never before encountered such discrimination during his 10 years in nursing, but it has become such a common experience among his Asian colleagues that he thought about quitting.

“Everybody is scared. I’m putting myself out there only to be treated this way. It’s very disheartening,” he said. “We’re not sick. You’re the one who is sick, which is why you are here. And you are exposing us as the health-care provider taking care of you, and we are treated as though we are the ones carrying the coronavirus.”

This spring in Seattle, Amy Zhang was wearing scrubs, walking to her 13-hour night shift as an anesthesiology resident, when a man began cursing at her a block away from the hospital.

“F— you, China, for giving us smallpox,” the man shouted at Zhang, the 29-year-old doctor recalled. He followed her and continued yelling racial epithets.

Zhang said the encounter shook her, affecting her ability to focus on her work at the start of her shift. “I was not in the best state of mind to help out with patient care,” she said.

And in Southern California, Audrey Sue Cruz, an internal-medicine doctor in Loma Linda, was conducting a telephone visit with a new patient recently when, 15 minutes into the appointment, the woman began grilling the physician on her medical education, work history and ethnicity.

Cruz told the patient that she is Filipina, to which she said the patient replied: “Wow. I can’t believe what your people did. I usually wouldn’t choose an Asian doctor, but you seem nice.”

Cruz quickly ended the visit. The incident inspired her to join more than a dozen other doctors in producing an #iamnotavirus video to help combat the wave of bigotry against Asians.

“We wanted to use our voices as physicians to remove the stigma that’s occurring right now about Asian people being virus carriers,” Cruz said.

She posted the video on Instagram. Then came the comments: “Bat eater.” 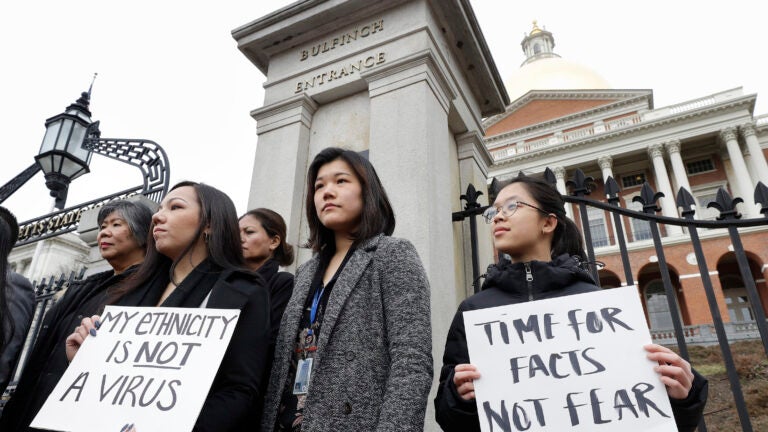