In Connecticut, flags that had been lowered during the somber peak of the coronavirus pandemic were raised to full-staff on Wednesday to signal a return to business.

And across Alaska, restaurants, bars and gyms, which have been open to small numbers of customers for weeks, were getting ready to rev back up to full capacity. “It will all be open,” Gov. Mike Dunleavy announced, “just like it was prior to the virus.”

The United States has crossed an uneasy threshold with all 50 states beginning to reopen in some way, two months after the coronavirus thrust the country into lockdown. But there are vast variations in how states are deciding to open up, with some forging far ahead of others.

The increasing moves to lift restrictions on businesses — or at least open up outdoor spaces like beaches and state parks — reflect the immense political and societal pressures weighing on the nation’s governors, even as epidemiologists remain cautious and warn of a second wave of cases.

With millions of people out of work and many Americans entering their third month isolated at home, the push to take action rivals what states faced at the beginning of the crisis, when governors were urged to shut down.

“You have 50 different governors doing 50 different things,” said Andrew Noymer, an associate professor of public health at the University of California, Irvine. “There will be states that open too soon or states that are too conservative. It is hard to thread the needle.”

But if reopening has become a buzz word among politicians — many states have issued sweeping documents with color-coded plans to “rebound” and “bounce back” — life remains far from normal in most places across America. Even in Georgia, which opened many businesses last month ahead of other states, restaurants are seeing only about 15% of normal traffic, according to data published by OpenTable, a restaurant reservation website.

The White House has said that states should have a “downward trajectory” of cases over a 14-day period before reopening, but many states reopened well short of meeting those bench marks. Some epidemiologists see warning signs of a rebound, especially in the South, and because it can take as long as three weeks for a newly infected person to become sick enough to go to the hospital, the impact of reopening is unlikely to be detectable immediately.

People visit the Beluga whale tank at the Mystic Aquarium in Mystic, Conn on May 20.

“We really are playing with fire here in a very broad sense,” said Charles Courtemanche, an economist at the University of Kentucky. In a recent paper for the journal Health Affairs, he estimated that the number of confirmed cases in the United States, which reached 1 million at the end of April, would have been closer to 35 million without the restaurant closures and stay-at-home orders that began in mid-March. “Just because it hasn’t been a catastrophe yet in your state, doesn’t mean it doesn’t have the potential to be,” he said.

Ipakoi Grigoriadis was left to navigate the complexities while fielding breakfast orders at her family’s diner, Pop’s Family Restaurant, in Milford, Connecticut, which reopened to outdoor dining on Wednesday as Connecticut lifted its stay-at-home order and allowed some businesses to reopen.

Connecticut was among the last states to take the plunge toward reopening, representing the more cautious approach that has defined much of the Northeast. New York, which has seen by far the most cases and deaths in the nation, is proceeding with a regional reopening that excludes hard-hit New York City. In Washington, D.C., a stay-at-home order is in effect until June and the surrounding region remains closed.

Several states on the West Coast and certain Democratic-led states in the Midwest have also moved slowly, taking a regional or step-by-step approach.

By contrast, a number of states in the South opened earlier and more fully. Businesses have been open with social distancing requirements for nearly a month in Georgia, where the number of new cases has remained more or less the same. Mississippi saw its largest single-day increase in reported cases and deaths only after the state began to reopen.

The variation illustrates the political and regional differences that have come to define the state-by-state response to the coronavirus, as governors navigate a pandemic that comes with no political playbook.

Texas, the nation’s second-largest state, with 29 million residents, had among the shortest stay-at-home orders in the country when it reopened many businesses on May 1, in a move that appealed to the state’s pro-business spirit. But weeks later, officials reported the highest one-day total of new cases, and some fear many businesses will still not survive.

Of the more than 50,000 restaurants in Texas, 12% have gone out of business because of the pandemic, said Emily Williams Knight, chief executive of the Texas Restaurant Association. She said she expected that up to 30% would “not make it through the crisis.” The state’s restaurant industry has already lost 700,000 jobs, she said, and would most likely lose more.

“I think you see customers now having an emotional impact of driving up and having a restaurant they’ve spent years at simply closed, with a note saying, ‘Thank you for your patronage over the years,’” she said.

Diners on the outdoor patio at Skippers, a restaurant in Niantic, Conn. on May 20.

While scores of restaurants flounder or even collapse, El Arroyo, a popular Mexican restaurant at the western edge of downtown Austin, found a ticket to survival with a savvy marketing move — the sale of to-go margaritas. The restaurant has since begun serving customers on its patio and will return to indoor dining when Texas allows restaurants to expand to 50% capacity for indoor sales from 25%, starting Friday.

“We’re full,” said Shane Thompson, the manager. “People are happy to be out and about.”

Many are still hesitant. A new poll by The Associated Press-NORC Center for Public Affairs Research found that most Americans were somewhat concerned that lifting restrictions in their area would lead to new infections, and at least half were very or extremely concerned. About six in 10 people were in favor of people remaining in their homes except for essential needs.

Mary Lou Giles, a 73-year-old resident of El Dorado County, California, said that she and her husband planned to shelter in place for another several weeks, though businesses in her remote mountain county between Sacramento and Lake Tahoe were allowed to reopen sooner than in other parts of the state.

“I sincerely hope there will not be a surge in COVID cases as a result of what I believe is a premature rush to reopen,” she said. “But I’m not willing to gamble.” 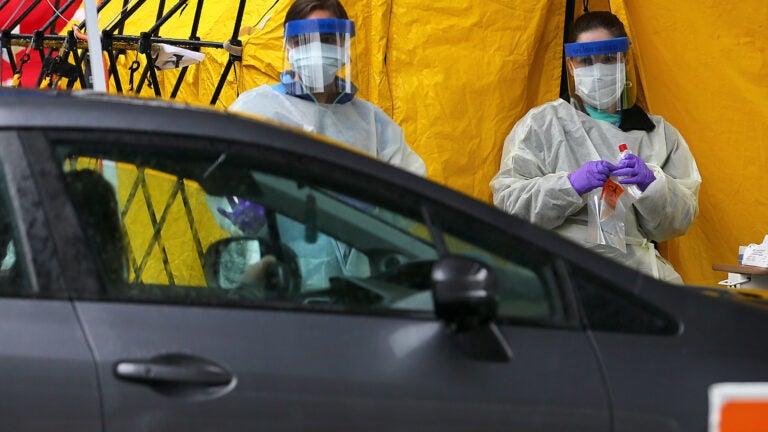 Here are the public health metrics Mass. is using to monitor COVID-19 in the state’s reopening