New Hampshire Gov. Chris Sununu knows that a lot of people from Massachusetts may be coming to his state this Memorial Day weekend.

He wishes they wouldn’t.

“Stay local,” Sununu said during a press conference Friday, when asked what his message was to Bay Staters as the neighboring New England States slowly begin to allow more businesses and activities to resume during the coronavirus pandemic.

“We have a stay-at-home order in place here,” he said. “Massachusetts has one in there.”

Sununu has previously cited the prospect of visitors from Massachusetts — which has among the highest confirmed COVID-19 infections and deaths of any state in the country — as one of the challenges his state faces as spring turns to summer, especially since New Hampshire is several weeks ahead in the reopening process.

Sununu’s stay-at-home order and Massachusetts Gov. Charlie Baker’s safer-at-home advisory both continue to urge their residents to limit unnecessary trips outside their homes, though neither placed any enforceable restrictions on travel.

And whether it be for the state’s mountains or Lakes Region — or for its recently resumed outdoor dining scene — he acknowledged that “a lot of people from Massachusetts may be coming up for this weekend.”

New Hampshire also allowed businesses like hair salons and retail stores to reopen on May 11, albeit under stringent occupancy limits, face covering requirements, and other social distancing and sanitation rules.

As of Friday, New Hampshire has reported fewer than 4,000 confirmed COVID-19 cases and 199 deaths due to disease — a fraction of the rates in states like Massachusetts, Connecticut, New York, and New Jersey, whose residents Sununu urged to stay home.

“That’s where they are and that’s where they should stay,” he said. “We’re just not at a position yet to start overly encouraging folks from out of state to come up and partake.”

The governor also announced Friday that New Hampshire beaches would remain closed until June 1. Earlier this month, he feared that opening them may result in “a huge influx from very infected areas on the North Shore and around Massachusetts.” And the new plan will only allow activities like running, walking, swimming, and surfing when they do reopen in June. Sitting and “lounging” will remain prohibited, Sununu said.

Similar to Massachusetts, New Hampshire is also urging out-of-state visitors to self-quarantine for 14 days if they’re planning to stay for “an extended period of time”

“For the safety of all, we are encouraging you to remain in your home state until additional restrictions are lifted,” reads a post on the New Hampshire’s COVID-19 website.

Sununu’s comments Friday came after Baker made an impassioned plea for Bay Staters not to get complacent over the holiday weekend, especially given all the sacrifices that had been made to keep the number of COVID-19 cases from becoming unmanageable.

“People have worked really hard and given up a tremendous amount over the course of the last 8 or 10 weeks to bend the trend on this and we succeeded,” the Massachusetts governor said Friday afternoon in Lawrence. “And it’s because of the work that everybody did that we’re now here in a position where … we can start talking about a gradual, careful, data-driven, phased reopening. Don’t let a few nice days step on that.” 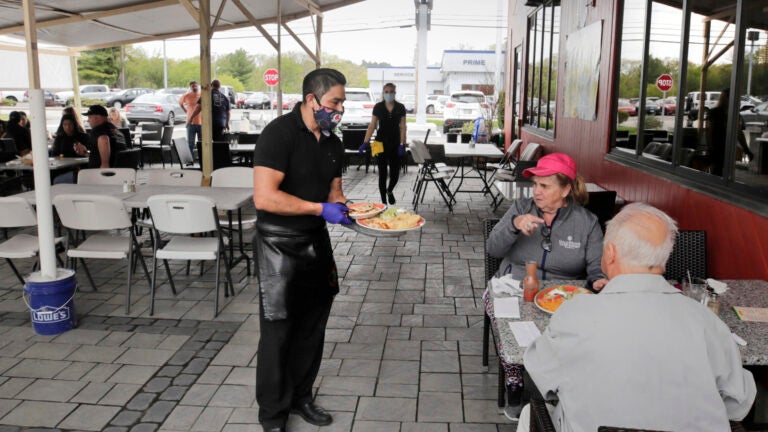