As health experts warned reopening could bring a resurgence of coronavirus cases across the country, the governor of Arkansas said over the weekend that his state was facing a “second peak” in infections after a cluster emerged at a pool party.

“A high school swim party that I’m sure everybody thought was harmless,” Asa Hutchinson said during a briefing. “They’re young, they’re swimming, they’re just having activity, and positive cases resulted from that.”

Hutchinson, a Republican, didn’t specify the number of cases linked to the party, and the state’s health department didn’t immediately respond to a request for comment from The Washington Post.

He also didn’t say how residents in his state should ensure they don’t spread the virus, but in a morning interview on Fox News Sunday, Hutchinson didn’t stress staying home.

“We have to manage the risk,” he said.” “We take the virus very seriously, it’s a risk, it causes death, but you can’t cloister yourself at home, that is just contrary to the American spirit.”

Hutchinson never issued a statewide stay-home directive, and at a White House meeting with President Donald Trump on Wednesday, the governor emphasized Arkansas is “at work” and businesses are open.

But on Saturday, he warned people celebrating the holiday weekend to “be safe.”

“During this Memorial (Day) weekend, we want to be out and we want to enjoy ourselves, we want to remember this holiday and those that have served our country and given their lives in service of our country,” he continued, “but let’s be safe and let’s be disciplined at the same time.”

Earlier in the week, the state had logged its highest single-day count of new cases: 455. Then, on Saturday, Arkansas added 163 confirmed cases and two deaths. To date, 115 people in the state have died of COVID-19, the illness caused by the virus.

“It’s clear and evident to me that we had one peak and then we had a deep dip and then we’re having a second peak right now,” Hutchinson said Saturday.

Even as the death toll in the United States climbed toward 100,000, the warm weather and holiday festivities drew large crowds to some of the country’s outdoor attractions. People flocked to beaches in Maryland and New Jersey, and video of vacationers flouting social distancing guidelines in Missouri’s Lake of the Ozarks was shared widely on social media.

“Instead of taking fact-based action, Trump blames others for his chaotic failures and erratic response; undermines scientists; and ignores Americans’ hardship,” she wrote. “Our lives are at stake in this election. Vote.”

The political foes have long traded barbs, with Pelosi saying Trump shouldn’t take hydroxychloroquine, an anti-malarial drug he has championed as a game-changing treatment for the coronavirus, as protection against the virus because he’s “morbidly obese.”

The president has said Pelosi and other Democrats are exaggerating the scale of the pandemic to score political points.

The Times’ front page on Sunday pays tribute to 1,000 people who died of the disease caused by the coronavirus, as the country’s toll nears 100,000. Other Democratic politicians also shared the front page, including governors of hard-hit states such as California and New Jersey.

“While there are no words we can offer equal to the magnitude of this loss, let us come together to honor their lives by ensuring no one else needlessly dies from this virus,” New Jersey Gov. Phil Murphy, a Democrat, tweeted.

While Pelosi named Trump explicitly, other Democrats were less direct, suggesting only that the deaths were a consequence of a lack of leadership.

The United States could move as soon as Sunday to restrict entry from Brazil, a country with a rapidly rising number of coronavirus cases and deaths, White House national security adviser Robert O’Brien said Sunday morning.

“I think that we’ll have a 212(f) decision today with respect to Brazil and just like we did with the U.K. and – and Europe and China,” O’Brien said on CBS News’ “Face the Nation” with Margaret Brennan. “And we hope that’ll be temporary. But because of the situation in Brazil, we’re going to take every step necessary to protect the American people.”

Brazil has recorded 347,398 coronavirus cases and 22,013 deaths. The numbers put Brazil second in the world for coronavirus case numbers, trailing only the United States. Brazil’s president, Jair Bolsonaro, has called the virus a “little cold.”

“I don’t think there’s ever going to be an analysis that supports the massive figures coming out of the House,” he said on CNN’s “State of the Union.”

Hassert also warned the United States might still be looking at double-digit unemployment in November. But, he said, “I think that all the signs of economic recovery are going to be raging everywhere. And the only thing we’re going to really be debating, as economists, is, are we going to get back to where we were, or is it going to be kind of a long haul to get there?”

In the interview, Hassett also said he has consulted his doctor about taking hydroxychloroquine but was told the drug would interact badly with other medicines he takes. Trump has said he’s taking the drug to protect against the coronavirus despite studies showing it may be unsafe.

“I think there’s a lot of evidence in the lab this could work,” Hassett said.

As California Gov. Gavin Newsom, a Democrat, considers whether to ease restrictions on in-person religious gatherings, new clusters of coronavirus cases have emerged in northern California that appear connected to church services.

Health officials in Mendocino County confirmed over the weekend that the county’s six newest infections were linked to the Redwood Valley Assembly of God, the San Francisco Chronicle reported.

The county reported last week that the church’s pastor and two other people were infected after they participated in a live-streamed Mother’s Day service that featured singing.

“When we have an outbreak of such a large magnitude, it’s very concerning because we know that these individuals have had other contacts since contracting the disease,” County Health Officer Noemi Doohan said in a video update Friday. “We now have to do the very time consuming and difficult work of the case investigation contact tracing.”

In Butte County, at least two people have fallen ill with covid-19 after attending a Mother’s Day service held by a local church in violation of the state’s prohibitions on large gatherings, as the Chico Enterprise-Record reported last week. County health officials have told the more than 180 people who attended the service to self-quarantine.

“At this time, organizations that hold in-person services or gatherings are putting the health and safety of their congregations, the general public and our local ability to open up at great risk,” County Health Director Danette York said in a statement.

Facing mounting pressure from religious groups to loosen restrictions on churches, Newsom said last week he would issue new guidance on in-person worship by Monday. Trump has called on the nation’s governors to allow churches to open amid the pandemic, threatening to take unspecified action against them if they refuse.

Sen. Rick Scott, R-Fla., defended the president’s call for churches and other houses of worship to open during the Memorial Day holiday, saying he believes people will attend safely.

“I trust the American public. I think they’re going to make the right decision,” he said Sunday morning on “State of the Union.”

Scott declined to say whether Trump could or should override governors who keep churches closed, saying he believes the Bill of Rights guarantees people the right to attend services.

“Do I believe the government can tell us not to worship? I don’t believe they can,” he said.

But New Jersey’s Gov. Murphy pushed back against the president’s urging to open houses of worship during the Memorial Day weekend, saying it’s not yet safe in his state for more than 25 people to gather indoors.

“We’ll get there on houses of worship,” he said.

Murphy also urged more federal aid for state and local governments. New Jersey may have to lay off state employees, including teachers, firefighters and health-care workers, if the state doesn’t get significant aid, he said, the result of billions of dollars in lost income due to the coronavirus pandemic.

Tenants nationwide are facing the possibility of getting kicked out of their homes as officials lift bans on evictions intended to protect renters amid the mounting economic fallout from the coronavirus pandemic.

Even with tens of millions of people out of work and the United States recording job losses not seen since the Great Depression, major metropolitan areas are allowing eviction restrictions to expire, threatening tenants who have been unable to pay rent because of reduced income or job loss on account of the public health emergency.

In Houston, eviction hearings resumed last week after the Texas Supreme Court lifted the state’s moratorium, as Houston Public Media reported. Renters could start getting forced out of their homes and businesses as early as May 26.

Evictions are also looming over renters in Kansas City, Missouri, where proceedings are set to resume at the beginning of June. Tenants are rallying to persuade officials to extend protections that were put in place along with the city’s stay-at-home order.

“After this pandemic hit, both of my main jobs ended. And to be honest, I’m quite scared,” Ashley Johnson of the organization KC Tenants told KMBC last week. “I’m scared for my children and I.”

In Florida, the Tampa Bay Times reported hundreds of eviction cases are awaiting action in Florida courts, having piled up during Gov. Ron DeSantis’ stay. It’s unclear what will happen to the pending cases when the order expires June 2.

Further complicating the process for renters and homeowners is the patchwork of policies that differ from county to county and state to state and include the eviction moratorium granted under the Cares Act, which prevents evictions of tenants in federal rental housing or those with federally backed mortgages for missing payments. 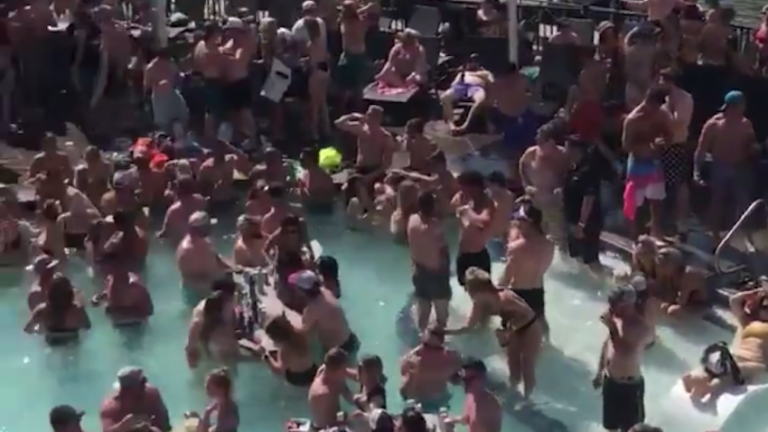