Massachusetts entered a balancing act last Monday as Gov. Charlie Baker introduced his blueprint to reopen the state, a plan that looks to revive Massachusetts’ economy without prompting a second surge of the coronavirus pandemic.

Yet some public health experts are still concerned that the plan left out essential workers’ voices, isn’t following the right metrics as it moves forward, and that loosening restrictions without a way to tighten them again may ultimately lead to a future spike in cases, and deaths.

In announcing the reopening report, Baker said he fully expected to hear some people say he’s moving too fast, while others say the reopening isn’t happening fast enough.

“The reopening advisory board, which had very smart people on it and met with a zillion different organizations of one kind or another as they went through their process, basically laid out what they felt was a careful and a cautious approach to this,” Baker said.

Phase one, which began on May 18, allowed a select few to resume routines, such as manufacturing facilities, construction sites, places of worship, and hospitals and community health centers providing high priority preventative or pediatric care. Concurrent phases will last at least three weeks and progression between each, Baker said, will be driven by data on new coronavirus cases, hospitalizations, and other health metrics.

“We’re playing this game — and it’s a real one — with the virus and the economy at the same time,” Baker said during last Monday’s news conference. “And it’s really important for people to step up and recognize and understand that this game’s not over.”

Dr. Regina LaRocque, a physician in the Division of Infectious Diseases at Massachusetts General Hospital, an Associate Professor of Medicine at Harvard Medical School, and a member of the Massachusetts Coalition for Health Equity, has been closely following the coronavirus’s spread since the beginning.

To her, the process behind the reopening plan wasn’t transparent or inclusive, but rather like a black box.

“I think we should question if we really have achieved the metrics that we needed to achieve before embarking on this process,” LaRocque said. “I think Massachusetts needs to have a reckoning of what has happened in our state.”

Aside from a seemingly arbitrary date, she said the plan also excluded many of the communities that have been most affected by the virus — like nurses, essential workers, representatives of the nursing home community, and the people who’ve been getting sick and dying at the highest rates.

“It’s not clear from the outside how their concerns were reflected in the reopening plan,” LaRocque said. “If any mistakes get made along the way, we’re all going to pay the price.”

LaRocque said another worry is whether employers have been given enough lead-up time to put the right safeguards in place before resuming routines, noting that many people who have been getting sick are frontline workers.

“A series of checklists for employers is going to rely a lot on people’s goodwill,” she said. And “the virus is going to exploit any areas where we fail to make things safe.”

Health institutions in the state have already stretched themselves thin to manage the first phase of the disease, LaRocque said, adding that we’re still in the thick of it.

“Every step we take to relax safeguards is going to result in more spread,” she said.

LaRocque also said many frontline workers are afraid to be tested, or find themselves avoiding calls from the state’s contact tracing team because they can’t afford to stay home from work.

“If people can’t access the tools we’re using to control the epidemic, if they can’t participate in it, then it’s doomed to fail,” she said. “We’re going to have to define success and failure, and whether we think 100 people dying every day is a success.”

Flames on the first floor

Dr. David Hamer, an attending physician in infectious diseases at Boston Medical Center and professor at Boston University Schools of Public Health and Medicine, said that Baker’s reopening plan has taken many of the right precautions.

But he noted that one component still leaves him concerned — houses of worship opening during the first phase at 40% capacity.

Hamer said even with the mandatory safety standards places of worship are required to follow before holding religious services, there’s a great risk for transmission.

“I still am worried about any setting where you have a large number of people congregating and what the potential risk is,” he said.

Hamer said as the state moves forward, testing still remains a challenge, especially for people with mild symptoms or those who have been exposed but show no symptoms.

Human behavior could pose another problem.

“I’m worried about people, human behavior, and people not adhering to the guidelines in terms of safe distancing in public places,” he said, noting it will also be important for businesses to  adhere to the state-mandated safety standards.

According to state officials, businesses that violate the state’s guidelines will face a series of fines before potentially being shut down.

And while it’s an employer’s responsibility to comply with the standards, Lt. Gov. Karyn Polito said last week that it will be up to customers and workers to hold them accountable.

Yet Dr. Julia Koehler, an associate pediatrics physician in the Division of Infectious Diseases at Boston Children’s Hospital and an assistant professor of pediatrics at Harvard Medical School, said it worries her that there aren’t anti-retaliation protections in place for workers to speak out without facing dismissal or having their job threatened.

Koehler said she’s also concerned that immigrant communities have not been asked what they need to protect themselves during the reopening process.

Koehler compared the plan to sitting in a house on fire.

“On the third floor I smell some smoke, but I don’t see the flames,” she said. “On the first floor the flames are bursting out the window, and now I call off the fire department because I’m worried about water damage.”

As a pediatrician, Koehler’s always sure to ask patients what they need and what they’re feeling, and she said the state needs to ask communities that have been at the heart of outbreaks those same questions.

Following the reopening report’s release, the Massachusetts Coalition for Occupational Safety and Health also frowned upon the way it approaches worker protection.

“The Administration has profoundly failed workers that have been working for the last two months and is now, with this plan, failing to robustly protect everyone who’s going back to work,” MassCOSH said in a statement last Monday. “The failure of this plan isn’t that it is opening up the economy too fast or too slow — its failure lies in the plan’s inability to adequately protect workers and the public from COVID-19.”

Koehler said it’s important to consider everyone, including workers, because if COVID-19 is circulating anywhere it might be circulating everywhere.

“I cannot emphasize enough that how we succeed against this virus is a question of biology and of physics, it is not a question of politics. The virus does not care about our partisan beliefs,” she said. “It doesn’t care whether we take it seriously or not, whether we think it’s a hoax, it simply responds and acts on the laws of biology and physics.”

When Koehler first read the reopening report, she said she felt dejection and sadness wash over her. Myriad thoughts ran through her head —  like wondering how she could travel to see her parents again — as she realized the plan might invoke a second surge.

Baker’s plan, Koehler said, lacks preset triggers to shut down if infections spike again. These triggers could be situated on a regional basis, she added, but without them, she fears it will be hard on residents to gradually sharpen measures all over again.

“I really hope we can control this better and that we do not experience another surge. I really hope so,” she said. But “my concern remains that we may be heading into uncharted and unsafe water.” 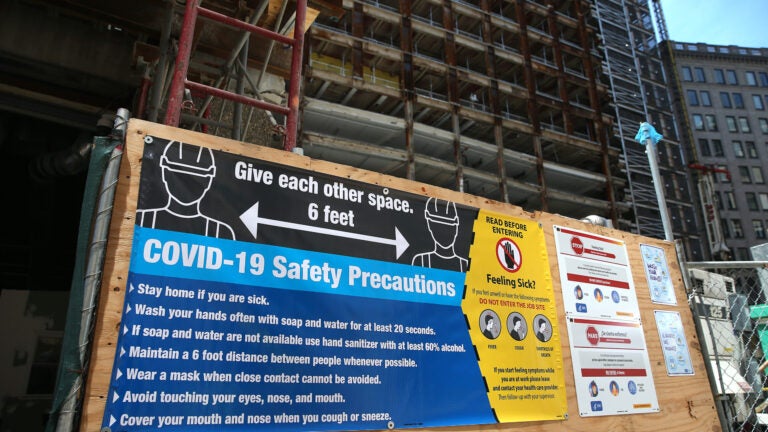 Concerned about returning to work as Mass. reopens? Here are 5 things an employment law attorney says you should know.