A Harvard public health expert says the comments made by President Donald Trump at a Saturday campaign rally about slowing coronavirus testing are “consistent” with the policies that have come out of the White House since the pandemic began.

Trump told the supporters who gathered to see him in Tulsa, Oklahoma, on Saturday that he asked his administration to slow down testing since widespread testing turns up more COVID-19 cases, calling testing a “double-edged sword.” White House officials have said the comment was a “joke.”

President Trump on coronavirus testing: “I said to my people, slow the testing down, please.” pic.twitter.com/n9C9DJD9km

Dr. Ashish Jha, director of the Harvard Global Health Institute, told CNN’s John King on Sunday that he doesn’t believe Trump was joking when he made the comments.

“It’s actually very consistent with the policy we’ve been seeing coming out of the White House,” he said. “An effort to not put too much time and effort into ramping up testing. And this is incredibly frustrating for the millions of Americans who have gotten sick and have not been able to get tests. It’s got to be incredibly frustrating for people who have lost family members in nursing homes.”

Since the start of the pandemic, public health experts have stressed that robust testing is a critical cornerstone for controlling the virus outbreak, since it makes clear who has the virus and who doesn’t, and have expressed concerns that state and local governments were below target goals for testing.

“This is unfortunately not a joke,” Jha added of Trump’s comments on testing. “It’s led to more than 100,000 Americans having died largely because we have not built up the testing infrastructure that our country needs.”

The Harvard doctor also said he disagreed with the president’s assertion at the Tulsa rally that the coronavirus is “fading away” in the U.S.

“We’re seeing a resurgence in many parts of the country, and we have to remember we are early days in this pandemic,” Jha said. “Not only is it not fading now, this is going to be with us for at least another 12 months — and that’s the most optimistic scenario for having a vaccine. So unfortunately it is not fading away, and, in many parts of the country, it’s only getting worse.”

“I don’t think the President was joking.” Dr. Ashish Jha reacts to Pres. Trump’s claim that he ordered his administration to slow down coronavirus testing. “This is incredibly frustrating for the millions of Americans who have gotten sick and have not been able to get tests.” pic.twitter.com/5rO6pVci0r

Arizona, Texas, and Florida are among the states seeing spikes in coronavirus cases in the wake of reopening their local economies. According to The New York Times, more than two million people in the U.S. have now contracted COVID-19 and each day about 21,100 new cases are reported nationally. 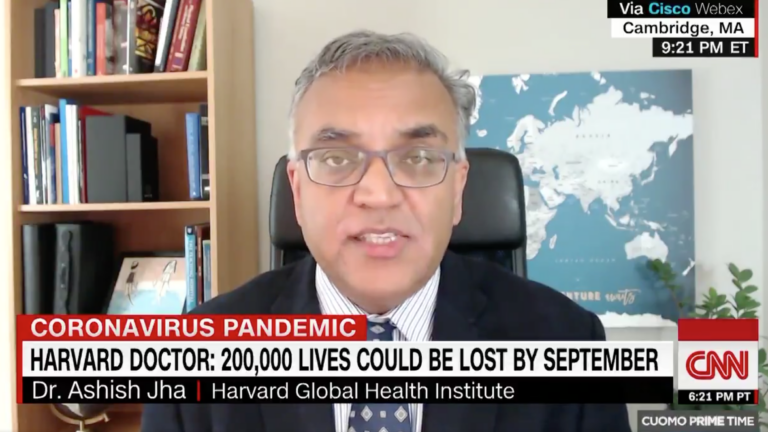 ‘It’s not going to magically disappear’: Harvard doctor expects COVID-19 deaths will rise to 200,000 in September