CHICAGO — Leaders of local and state health departments have been subject to harassment, personal insults and death threats in recent weeks, a response from a vocal and angry minority of the public who say that mask requirements and restrictions on businesses have gone too far.

One top health official, Dr. Barbara Ferrer, the director of the Los Angeles County Department of Public Health, issued a statement Monday condemning attacks on public health directors and disclosing that she faced repeated threats to her safety.

“The death threats started last month, during a COVID-19 Facebook Live public briefing when someone very casually suggested that I should be shot,” Ferrer said in a statement. “I didn’t immediately see the message, but my husband did, my children did, and so did my colleagues.”

“It is deeply worrisome,” she added, “to imagine that our hardworking infectious disease physicians, nurses, epidemiologists and environmental health specialists or any of our other team members would have to face this level of hatred.”

Across the country, many public health officials entered the coronavirus pandemic with bare-bones staffs and strained budgets, leaving them ill-prepared to handle a mounting crisis. Before the pandemic, they had focused on illness prevention, contact tracing for communicable diseases, vaccinations and campaigns against smoking and vaping.

Now some of them, suddenly facing the public with regular television briefings about efforts to fight the coronavirus, are choosing to leave their positions entirely.

Lori Tremmel Freeman, the chief executive of the National Association of County and City Health Officials, said last week that dozens of top health officials have resigned or been fired since the pandemic began. At least four state health directors have resigned from their posts; Dr. Amy Acton, the state health director of Ohio, stepped down this month after enduring anti-Semitic attacks and demonstrations by armed protesters on her front lawn.

Dr. Umair A. Shah, the executive director of the public health department in Harris County, Texas, which includes Houston, described a tense new role. “Now that we’re quite visible and we’re part of very difficult decision-making, naturally those decisions are having an incredible impact on community members in a very specific way,” Shah said. “That’s where the problem comes in.”

Not all of the officials have said why they are leaving, and some have cited personal reasons or planned retirements, but Freeman said she had heard many accounts of harassment.

“There’s a big red target on their backs,” Freeman said. “They’re becoming villainized for their guidance. In normal times, they’re very trusted members of their community.”

Some critics of the public health directors have said that they believe that allowing businesses to operate is worth the risk of spreading the coronavirus, and that health directors are too cautious about reopenings. Others have cited conspiracy theories that claim that the coronavirus is a hoax; that the development of a vaccine is part of a massive effort to track citizens and monitor their movements; and that wearing a mask or cloth face covering is a practice that impedes personal freedom.

In Washington state, where rural counties are struggling with new outbreaks and trying to warn residents to take basic precautions to stem the spread of the virus, pleas from local health officials have often been answered with hostility and threats.

In Yakima County, which has more than six times as many cases per capita as the county that includes Seattle, hospitals have reached capacity and patients were being taken elsewhere for medical care. Gov. Jay Inslee warned over the weekend that “we are frankly at the breaking point,” and has said he would require Yakima residents to wear face coverings in an effort to slow the virus’s spread.

“I’ve been called a Nazi numerous times,” said Andre Fresco, the executive director of the Yakima Health District. “I’ve been told not to show up at certain businesses. I’ve been called a communist and Gestapo. I’ve been cursed at and generally treated in a very unprofessional way. It’s very difficult.”

In California, angry protesters have tracked down addresses of public health officers and gathered outside their homes, chanting and holding signs. Last week, a group called the Freedom Angels did just that in Contra Costa County, California, filming themselves and posting the videos on Facebook.

“We came today to protest in front of our county public health officer’s house, and some people might have issues with that, that we took it to their house,” one woman said in a video. “But I have to tell you guys, they’re coming to our houses. Their agenda is contact tracing, testing, mandatory masks and ultimately an injection that has not been tested,” she said, apparently referring to a vaccine even though none have been approved.

Dr. Nichole Quick, the chief health officer for Orange County, California, resigned as protests and harassment intensified after an order to require face masks in certain businesses, including grocery stores and pharmacies. Emily Brown, director of the Rio Grande County Public Health Department in rural Colorado, was fired when she encountered community resistance to the stricter rules she had encouraged.

The departures across the country have prompted industry officials to ask whether a dearth of leadership is ahead for health departments, even as they combat the pandemic.

“We’ve never seen this level of vitriol before,” said Kat DeBurgh, the executive director of the Health Officers Association of California. “I’m worried not just about the present but about the future. When they’re subject to such harassment, who is going to step into these jobs?” 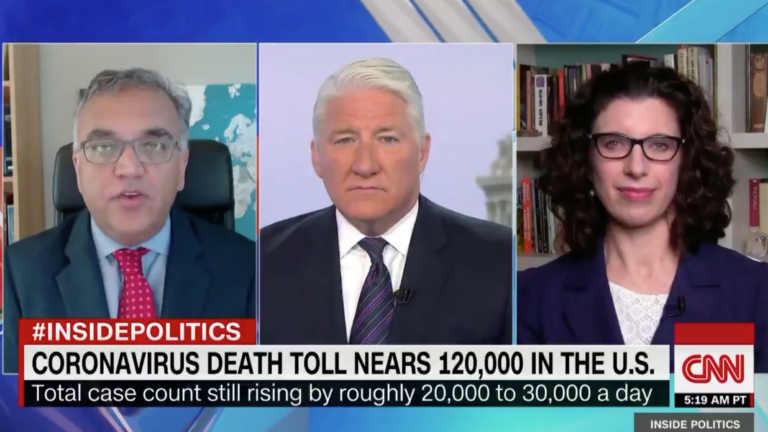 ‘This is unfortunately not a joke’: Harvard doctor reacts to Trump’s comments on COVID-19 testing at Tulsa rally