WASHINGTON – Anthony Fauci and other Trump administration health officials warned that coronavirus activity could continue for some time and urged continuing social distancing and other precautions as they testified in a high-profile congressional hearing Tuesday at a key juncture in the country’s response to the pandemic.

With cases rising in nearly half the states and a White House eager to return to normal, Fauci, the nation’s top infectious-disease expert, and three other key officials are appearing before a House panel overseeing the administration’s response. All four attended in person, instead of remotely.

The testimony is Fauci’s first since a highly anticipated appearance a month ago, and it comes on the heels of President Donald Trump’s comments at a campaign rally in Tulsa, Okla., on Saturday that he had asked officials to slow testing to show fewer cases. Fauci and other witnesses said they had not received such a directive.

Fauci was joined before the House Energy and Commerce Committee by Robert Redfield, director of the Centers for Disease Control and Prevention; Stephen Hahn, head of the Food and Drug Administration; and Brett Giroir, assistant secretary for health.

In his opening statement, Fauci told members of Congress that he was “cautiously optimistic” that an effective vaccine will be available to the American public by the end of this year or the beginning of next year.

The government is providing extensive financial support to 14 vaccine candidates.

“Although you can never guarantee at all the safety and efficacy of a vaccine until you test in the field, we feel cautiously optimistic based on the concerted effort and the fact that we are taking financial risks to be able to be ahead of the game so that when … we get favorable candidates with good results, we will be able to make them available to the American public” within a year of when officials began researching a vaccine in mid-January, Fauci said.

Hahn said his agency intends to use “appropriate flexibility” in employing regulatory tools to provide guidance to researchers and companies working on vaccines and drugs for COVID-19, the disease caused by the novel coronavirus. But he said “data and science will dictate” when the FDA approves safe and effective products to prevent and treat the disease.

Hahn also said the agency has launched a “comprehensive” review of all its responses to date involving the coronavirus. The goal, he said, is to keep “what is working well” and to adjust policies that are not producing the desired result.

The FDA has been criticized for initially being slow to clear diagnostic tests for COVID-19 from academic laboratories and then being too lenient on antibody tests. The agency has since adjusted both policies.

In the hearing, all four health officials said they had never been instructed to slow down testing for the coronavirus.

When asked by Rep. Greg Walden of Oregon, the committee’s top Republican, whether Trump had ever instructed any of them to slow down testing — as Trump claimed during his rally in Tulsa on Saturday — Fauci, Hahn, Redfield and Giroir said no.

“None of us have ever been told to slow down on testing … In fact, we will be doing more testing,” Fauci said.

White House officials have said Trump was joking during the rally. But Trump on Tuesday said, “I don’t kid,” when a reporter asked him whether he was joking.

The president is scheduled to speak Tuesday in Arizona, which is among the states Fauci said were seeing a “disturbing surge” of new coronavirus infections. The next couple of weeks “are going to be critical in our ability to address those surges,” he said.

“A couple of days ago, there were 30,000 new infections. That’s very disturbing to me,” Fauci said.

Fauci also told lawmakers that he had never seen a single virus that produced such a wide range of symptoms and disease severity in its victims. Some people infected with covid-19 have no symptoms, Fauci said, while others have mild symptoms, and still others require weeks in a hospital on a ventilator or die of the virus.

Fauci urged young people who might be tempted to resume their normal lives because they believe it’s unlikely they will get seriously ill from the virus to consider the impact they could have on the outbreak across the country.

“What you can’t forget is if you get infected and spread the infection, even though you do not get sick, you are part of the process of the dynamics of an outbreak,” Fauci said. “What you might be propagating, perhaps innocently, is you infect someone, who infects someone, who then infects someone who is vulnerable.”

Fauci said in response to a question from Rep. Bobby Rush, D-Ill., that he believes institutional racism has contributed to the disproportionate impact of the coronavirus on African Americans.

“Well, I mean, obviously the African American community has suffered from racism for a very, very long period of time,” Fauci told Rush, who was appearing remotely. “And I cannot imagine that that has not contributed to the conditions that they find themselves in economically and otherwise. So the answer, congressman, is yes.”

Data has shown that minorities account for a disproportionate number of cases and deaths from the virus. The CDC has said that more widespread underlying medical conditions and a greater number of racial minorities living in densely populated areas contribute to the phenomenon.

Calling the pandemic the “greatest public health crisis” that the United States has faced in more than a century, Redfield urged Americans to continue social distancing, hand-washing and use face coverings to prevent and control the spread of the coronavirus, calling them the “most powerful weapons” health officials have.

He said the rise in the number of cases in many states is driven by several factors, including increased community transmission.

His comments undercut what the president has said, that the increase in cases is the result of increased testing.

In preparing for the possibility of covid-19 and influenza hitting at the same time this fall, Redfield also urged Americans to embrace flu vaccinations.

“This single act will save lives,” he said. 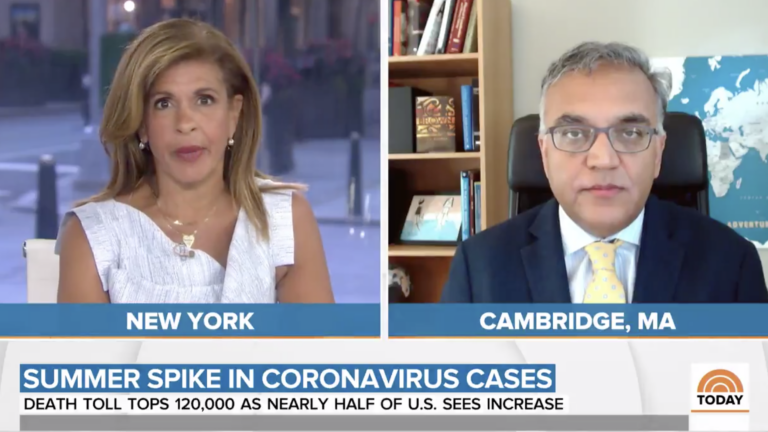 Head of Harvard Global Health Institute thinks the U.S. needs a mask policy ‘across the country’