When Gov. Charlie Baker was asked if there may have been less death at the Holyoke Soldiers’ Home had there been a different leadership team, he agreed.

Baker took responsibility for the state Department of Veterans’ Services, under his administration, failing to properly oversee the home for elderly veterans, where 76 of them died of COVID-19 since an outbreak ramped up within its walls in March, in response to a scathing report that at one point calls decisions made by the home’s leadership team in the last couple weeks of that month “utterly baffling.”

Baker and Marylou Sudders, the state’s secretary of health and human services, responded during a press conference to the report, released Wednesday morning following an independent investigation into the practices at the home conducted by Mark Pearlstein, a former federal prosecutor. Baker said his Pearlstein and colleagues held 111 interviews with 100 witnesses and combed through more than 17,000 pages of documents to create the 174-page report.

Along with the 76 deaths, 84 veteran residents and 80 staff members also tested positive, the report says.

“The subject matter and details of this report are nothing short of gut wrenching. In fact, this report is hard to read,” Baker said Wednesday, noting that what happened there is “difficult to even think or speak about,” calling the deadly outbreak “truly horrific and tragic.”

The governor said he intends to release related reforms on Thursday.

Prior to the report’s release, Francisco Urena, the state’s secretary of veterans’ services, resigned from his position on Tuesday; Baker said during the press conference that Urena was asked to step down and he did so “gracefully.” Baker said he’s also working to remove Bennett Walsh, the home’s superintendent who was placed on administrative leave on March 30, as well as ridding the home of any “unqualified staff.” Sudders said during her remarks that David Clinton, the home’s medical director, and Stuart Ivimey, general counsel for the Department of Veterans’ Services, have also resigned.

Urena and the Department of Veterans’ Services failed to properly oversee Walsh and the leaders of the Soldiers’ Home, Baker said. There were two positions left open, referenced in the report, and these “should’ve been filled.”

Cheryl Poppe, superintendent of the Chelsea Soldiers’ Home, was named the acting secretary of veterans’ services, according to Baker. Sudders said Poppe, along with the National Guard and a new clinical management team, went to the Holyoke home when authorities were made aware of what was going on.

‘Opposite of infection control’

One of the findings of the report that Baker and Sudders both mentioned during their remarks was a decision to consolidate two separate locked dementia wards into one, mixing COVID-19 positive patients, residents with symptoms and who were thought to have it, and those with no symptoms at all.

“Rather than isolating those with the disease from those who were asymptomatic — a basic tenet of infection control — the consolidation of these two units resulted in more than 40 veterans crowded into a space designed to hold 25,” the report says, noting that this was “the opposite of infection control.”

While Baker noted that protecting residents of long-term care facilities has been challenging, not just in Massachusetts but throughout the nation and world, he called out this decision specifically, noting that the consolidation left veterans in “deplorable conditions.”

When a member of the press at the conference asked if lives could’ve been saved had there been a different management team, Baker agreed.

“The report also says, in no uncertain terms, that many of the decisions that were made, and especially that decision to put two cohorts — a group of … residents who did not have COVID-19 in the same space as residents who did — had an incredibly negative impact on the likelihood of survival for many of those residents,” he said.

Sudders cited a lack of leadership at the home.

“Leadership is paramount during a time of crisis, and its absence at the Holyoke Soldiers’ Home created a chaotic environment for staff and devastating consequences for residents and their loved ones,” she said. “The weekend when the fatal decision was made to consolidate two units, the superintendent was not present. Leadership was absent, and staff were left on their own to deal with the crisis.”

Mistakes were made prior to the outbreak

Baker said the mistakes didn’t just happen during the outbreak itself, but prior to it — during preparation for a potential outbreak and then the home’s response when the virus made its way into the building.

He said any guidance sent out, either by the state or federal government, on how to keep residents safe and stop the virus from spreading “was either ignored or not properly implemented by leadership at the facility.”

There were also things leaders at the home delayed doing that could’ve helped stop the spread — things like more testing and closing down common spaces. The home allowed staff rotations to continue among units, and there was “inconsistent policy and practice in the use of personal protective equipment,” as well as a lack of proper records and documentation of residents.

“And finally, a total failure of leadership and a complete lack of compassion for these vulnerable heroes,” Baker said.

Baker noted that the “full extent” of the outbreak and conditions at the home were “not communicated” until the end of March, and while resources were then sent in by his administration to help, by that time “many of the other errors in judgment … had already done really significant damage to the people that were there.”

The report quotes a social worker’s description of what it was like caring for residents after the two dementia units were consolidated, describing holding the hand of one veteran while they could hear another resident dying nearby. There was no barrier separating them. Meanwhile, another resident was “pleasantly confused,” talking about what he’d had for lunch.

“I am trying not to have him concentrate on the veteran across from him who is actively dying, or the one next to him who I am holding his hand while he is dying,” the social worker said. “It was surreal … I don’t know how the staff over in that unit, how many of us will ever recover from those images. You want to talk about never wanting this to happen again.”

One of the things Baker plans to do is help staff deal with what they encountered.

“We’ll also be outlining several measures to address the trauma the staff have experienced in their working condition,” he said. “There’s a very dedicated group of nurses and other professionals at that facility, which was clearly represented by the report, who haven’t had the support that they deserve to do their jobs.”

When asked, Baker said he also wants to apologize to the families, either virtually or in person.

Following the report’s release, Massachusetts Attorney General Maura Healey, whose office is conducting a separate investigation into what happened, called the findings “heart-wrenching” in a statement.

“The report reveals that serious failures by leadership at the home contributed to the tragic loss of life there,” she said. “It also lays bare systemic failures of oversight by the Baker Administration in adequately preparing, staffing, and responding to this crisis to protect our veterans. These veterans served our country and risked their lives to protect us, and our state wholly failed to protect them. Our ongoing investigation will determine whether these missteps and errors warrant legal action.”

Healey also said she wants the recommendations from the report put in place, noting that these include “common sense practices like having DPH inspect the facility regularly, implementing a streamlined reporting structure, and appointing experienced healthcare leaders to oversee the facility, which in my view, should have already been happening.” 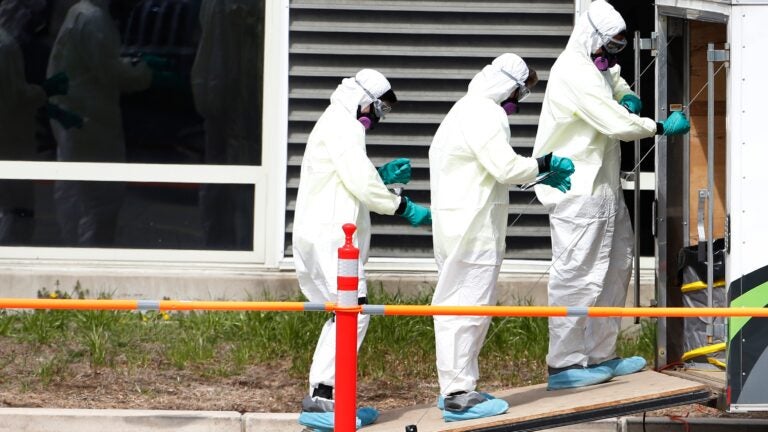 ‘We [were] moving these unknowing veterans off to die’: Read the report on the COVID-19 outbreak within Holyoke Soldiers’ Home