While Massachusetts currently holds the lowest COVID-19 transmission rate in the nation, the number of new cases continues to rise in several other states. On Thursday, the United States set a record for new cases with 39,97 2.

One fundamental recommendation in limiting the spread of the coronavirus pandemic is for the general public to wear a mask (or face covering) when outside of their home. While there is no federal mandate to wear a mask, various states and communities have made them a requirement under certain conditions.

Massachusetts Gov. Charlie Baker signed an executive order in May ordering all state residents over the age of 2 to wear masks in public when they are unable to remain six feet apart.

Yet the question of wearing masks has become a polarizing issue, with some residents refusing to wear them and lashing out at public officials who make them a requirement.

According to data collected by the Institute for Health Metrics and Evaluation (IHME) at the University of Washington, there is no question about the practicality of wearing masks when it comes to saving lives.

“That should be the big message that should go out to both the public and policy makers,” said Dr. Theo Vos, an IHME professor. In their recent study, Vos and his colleagues forecast that as many as 33,000 lives could be saved if 95 percent of the U.S. population wore masks in public.

Vos noted that even wearing non-medical grade masks or face coverings would have a profound effect in limiting COVID-19 transmission.

“Our conclusion from that — and it’s pretty consistent with what other studies are drawing as their conclusions — is that even with lower quality masks used in the general population, you can get a very substantial reduction in the transmission,” said Vos.

Such an effort could reduce transmission by 33 percent, according to the IHME research.

The practicality of wearing masks also appears to be the most cost-effective method of combating the virus without ordering another widespread lockdown.

“Given that it is such a simple and inexpensive measure — it may not be so easy to get up to 95 percent, but in principal there’s no cost there, there’s no supply barrier to reach that level — it would seem highly advisable that these measures are being taken, particularly now that we are seeing a good number of states going up rather quickly with pretty alarming prospects,” Vos reasoned.

“The unfortunate thing is that it is turning into a political issue in this country,” Vos admitted. “It’s considered linked to a particular political view whether you want to or not wear a mask. That seems really unfortunate because in the end what we want is to keep the country going, keep the economy alive as much as we can while still reducing the impact of this deadly disease as much as is possible. It would be a miss if we would not use this pretty potent way of reducing the health effects.”

Residents in Massachusetts are also advised to keep wearing masks, even with the transmission rate at its lowest point since the beginning of the pandemic in March.

“You could say it’s not here anymore, but for how long,” Vos asked. “And particularly when the season starts to work against us when the fall will come and there’s an upward push on the epidemic to spread again. I think it actually is better to be ahead of what is going to happen because if you can reduce when you’re at lower rates of transmission, and keep it low — or even reduce it more — the higher the chance is that if you have a good testing or a contact-tracing system that you can manage the numbers and thus contribute even more to stopping the spread.”

To help present its research, IHME built an infographic to showcase the the effectiveness of wearing masks: 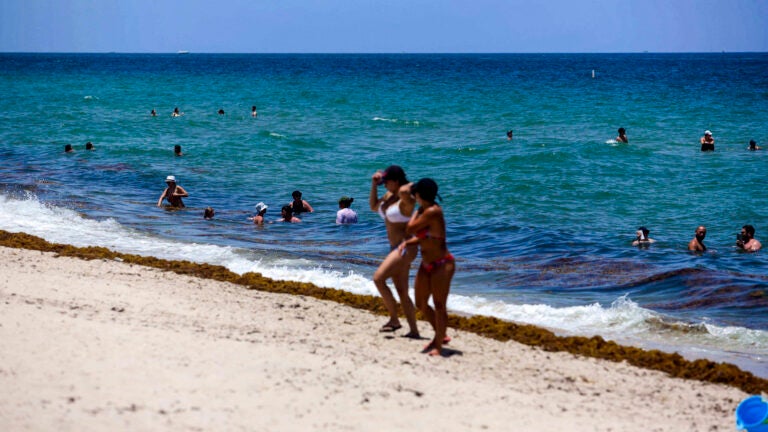