A Harvard doctor says that the reopening of indoor establishments like bars and restaurants must be dialed back amid surging coronavirus infections nationwide.

Dr. Ashish Jha, director of the Harvard Global Health Institute and an oft-cited medical expert during the COVID-19 pandemic, voiced his concerns on the “Today” show Monday morning. He said he agreed with Health and Human Services Secretary Alex Azar’s comment that “the window is closing for us to take action and get this under control” from a CNN interview Sunday.

“This is something we’ve known about the virus, that if you fall behind as we have, then you’ve got to act quickly and aggressively,” Jha said. “I think across all these states, we just can’t have bars — I’m not sure that we can even run restaurants where people are seating indoors, nightclubs. Anything that gathers people indoors, I think at this moment is way too risky and has to be dialed back.”

.@ashishkjha agrees with HHS Secretary Azar that “the window here is very narrow” to contain the coronavirus.

He also says, “Anything that gathers people indoors, I think at this moment, is way too risky and has to be dialed back.” pic.twitter.com/DfA0Oj2Z1I

“Most of these states opened when their underlying level of cases was really still high. They weren’t coming down. So I think they didn’t meet the White House’s own guidelines for opening up. … Almost none of these states had mandatory mask laws.” –@ashishkjha pic.twitter.com/rYU5QCGeqx

Indoor dining resumed with limits and restrictions in Massachusetts last Monday. While the commonwealth and New England at large has generally recovered from the peak of the pandemic in April, skyrocketing cases in the southern and western U.S. have contributed to the shattering of daily records nationwide this month.

Florida and Texas, two of the country’s new coronavirus hotspots, have both reintroduced restrictions on bars and restaurants after reopening them in early June. The United States stands alone among wealthy countries in its renewed crisis.

Jha said that Americans in hotspots should reconsider any large gathering indoors or outdoors ahead of the July 4th holiday weekend, but he noted that the latter is much safer.

“If you want to have a backyard barbecue and can keep socially distanced from your neighbors, I think that’s probably OK, but I think people should be wearing a mask,” the doctor said. “We’ve got to really try our best to reduce the level of risk, because our hospitals are getting pretty stretched across many parts of the country.”

“If you’re in one of these hot zones, then really I think people have to rethink any large gathering, whether indoors or outdoors. But of course, indoor gatherings I think right now are very risky,” @ashishkjha warns ahead of the holiday weekend. pic.twitter.com/eVXqJbY955 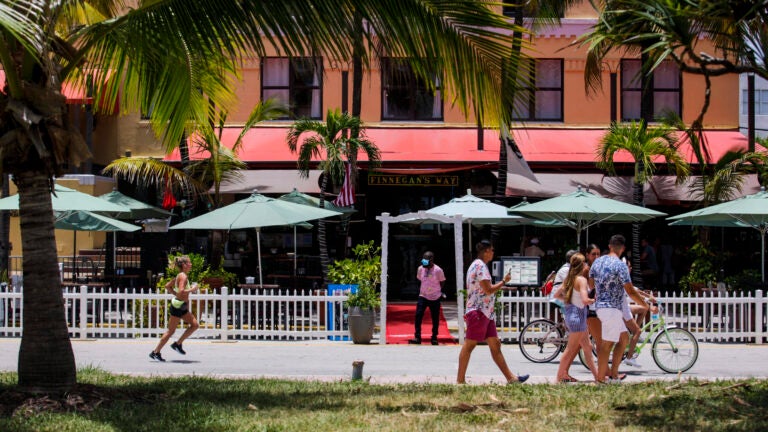 Florida’s COVID cases up fivefold in 2 weeks: ‘The numbers are scary’