Kim Victory was paralyzed on a bed and being burned alive.

Just in time, someone rescued her, but suddenly, she was turned into an ice sculpture on a fancy cruise ship buffet. Next, she was a subject of an experiment in a lab in Japan. Then she was being attacked by cats.

Nightmarish visions like these plagued Victory during her hospitalization this spring for severe respiratory failure caused by the coronavirus. They made her so agitated that one night she pulled out her ventilator breathing tube; another time, she fell off a chair and landed on the floor of the intensive care unit.

“It was so real, and I was so scared,” said Victory, 31, now back home in Franklin, Tennessee.

To a startling degree, many coronavirus patients are reporting similar experiences. Called hospital delirium, the phenomenon has previously been seen mostly in a subset of older patients, some of whom already had dementia, and in recent years, hospitals adopted measures to reduce it.

“All of that has been erased by COVID,” said Dr. E. Wesley Ely, a director of the Critical Illness, Brain Dysfunction and Survivorship Center at Vanderbilt University and the Nashville Veteran’s Administration Hospital, whose team developed guidelines for hospitals to minimize delirium.

Now, the condition is bedeviling coronavirus patients of all ages with no previous cognitive impairment. Reports from hospitals and researchers suggest that about two-thirds to three-fourths of coronavirus patients in ICUs have experienced it in various ways. Some have “hyperactive delirium,” paranoid hallucinations and agitation; some have “hypoactive delirium,” internalized visions and confusion that cause patients to become withdrawn and incommunicative; and some have both.

The experiences are not just terrifying and disorienting. Delirium can have detrimental consequences long after it lifts, extending hospital stays, slowing recovery and increasing people’s risk of developing depression or post-traumatic stress disorder. Previously healthy older patients with delirium can develop dementia sooner than they otherwise would have and can die earlier, researchers have found.

The ingredients for delirium are pervasive during the pandemic. They include long stints on ventilators, heavy sedatives and poor sleep. Other factors: Patients are mostly immobile, occasionally restrained to keep them from accidentally disconnecting tubes, and receive minimal social interaction because families cannot visit and medical providers wear face-obscuring protective gear and spend limited time in patients’ rooms.

“It’s like the perfect storm to generate delirium; it really, really is,” said Dr. Sharon Inouye, a leading delirium expert who founded the Hospital Elder Life Program, guidelines that have helped to significantly decrease delirium among older patients. Both her program and Ely’s have devised recommendations for reducing delirium during the pandemic.

The virus itself or the body’s response to it may also generate neurological effects, “flipping people into more of a delirium state,” said Dr. Sajan Patel, an assistant professor at the University of California, San Francisco.

The oxygen depletion and inflammation that many seriously ill coronavirus patients experience can affect the brain and other organs besides the lungs. Kidney or liver failure can lead to buildup of delirium-promoting medications. Some patients develop small blood clots that do not cause strokes but spur subtle circulation disruption that might trigger cognitive problems and delirium, Inouye said.

Nails in a rotating head

Then he pointed at his neck to show where the assault rifle should aim.

Temko, a 69-year-old mortgage company executive, could not speak because of the breathing tube in his mouth — he had been on a ventilator at UCSF Medical Center for about three weeks by then. So, on a Zoom call nurses arranged with his family, he wrote on paper attached to a clipboard.

“He wants us to kill him,” his son gasped, according to Temko and his wife Linda.

At home now in San Francisco after a 60-day hospitalization, Temko said his suggestion that his family shoot him stemmed from a delirium-fueled delusion that he had been abducted.

“I was in a paranoiac phase where I thought there was some sort of conspiracy against me,” he said.

When he was first placed on the ventilator, doctors used a lighter sedative, propofol, and dialed it down for hours so he could be awake and know where he was — a “regimen to try to avoid delirium,” said Dr. Daniel Burkhardt, an anesthesiologist and intensivist who treated him.

But then Temko’s respiratory failure worsened. His blood pressure plummeted, a condition propofol intensifies. To allow the ventilator to completely breathe for him, doctors had him chemically paralyzed, which required heavier sedatives to prevent the trauma of being conscious while unable to move.

So Temko’s sedation was switched to midazolam, a benzodiazepine, and fentanyl, an opioid — drugs that exacerbate delirium.

“We had no choice,” Burkhardt said. “If you’re very sick and very unstable, basically what happens is we conclude you have bigger problems. You know, I have to get you to live through it first.”

After about two weeks, the sedative-weaning process began, but other delirium-related quandaries emerged. Temko began experiencing pain and anxiety, compelling doctors to balance treating those conditions with using medications that can worsen delirium, they said.

The repeated nursing visits Temko needed interrupted his sleep-wake cycle, so he would often take daytime naps and become sleepless and agitated at night, said Jason Bloomer, an ICU nurse.

At home, his wife kept her phone by her pillow so she could hear him via a nurse’s tablet. “He would wake up and was confused and anxious and he’d start getting all worked up to where the ventilator couldn’t work,” said Linda Temko, who would reassure him, “It’s OK, breathe.”

His hallucinations included a rotating human head. “Every time it came around, someone put a nail in it, and I could see that the person was still alive,” he said.

He imagined that his wristwatch (which was actually at home) was stolen by a man who turned it into a catheter. The man played a recording of Ben Bernanke, the former Federal Reserve chairman, and told Temko that because he recognized the name, “‘You know too much, you’re not leaving the hospital.’”

When Bloomer asked, “Do you feel safe?,” Temko shook his head no and mouthed around his breathing tube: “‘Help me.’”

Later, he became despairing. “I did not know if I wanted to live or die,” he said.

He met with Kaplan, the psychiatrist, who recognized his symptoms as delirium, partly because Temko bungled tests like naming the months backward and counting down from 100 by sevens. “He could only get from 100 to 93,” Kaplan said, adding, “The cardinal sin of delirium is always impaired attention.”

Kaplan prescribed Seroquel, which he said helps with perceptual disturbances and anxiety.

Temko said another turning point came when Bloomer said that with months of hard work, recovery was likely.

An optimistic cognitive sign, said Kaplan, is that Temko can now describe his delirium in much more detail than he could several weeks ago.

‘I saw the devil’

Anatolio José Rios, 57, was intubated for just four days at Massachusetts General Hospital and did not receive highly delirium-inducing sedatives. Still, as sedation was lifted, he heard booms, and saw flashes of light and people praying for him.

“Oh my God, that was scary,” he said. “And when I opened my eyes, I saw the same doctors, the same nurses who were praying for me in my dream.”

After the ventilator was disconnected, Rios, a normally gregarious man who hosts a radio show, only responded with one- or two-word answers, said Dr. Peggy Lai, who treated him.

“I saw people lying on the floor like they were dead in the ICU,” he said. He imagined a vampirelike woman in his room. He was convinced people in the hall outside were armed with guns, threatening him.

He asked if the door was bulletproof and, to calm him, the doctor said yes.

Like many delirious patients, Rios warped typical hospital activities into paranoid imaginings. Watching a hospital employee hanging a piece of paper, he said, he thought he saw a noose and feared he would be hanged. His delusions were not helped by one of many seemingly small delirium-fueling factors: His eyeglasses had not yet been returned to him.

After 10 days of hospitalization, he spent two months in a rehabilitation center because of foot inflammation, recently returning to his East Boston apartment. In May, his father in Mexico died of COVID-19, Rios said. He reflected on another hallucination in the hospital.

“I saw the devil, and I asked him, ‘Can you give me another chance?’ and he said, ‘Yes, but you know the price,’” Rios recalled. “Now I think I know the price was my father.”

‘Down a rabbit hole’

Two months after returning home from her three-week hospitalization, Victory said she has been experiencing troubling emotional and psychological symptoms, including depression and insomnia. She has been noticing the smell of cigarettes or wood burning, a figment of her imagination.

“I feel like I’m going down a rabbit hole, and I don’t know when I will be back to myself,” she said.

Dr. Kevin Hageman, one of her physicians at Vanderbilt University Medical Center, said she “was pretty profoundly delirious.”

Victory, a Vietnamese immigrant and previously healthy community college student majoring in biochemistry, said she did not remember yanking out her breathing tube, which was reinserted. But she recalled visions blending horror with absurdity.

One moment, scientists in Japan were testing chemicals on her; the next, she was telling them, “‘I am an American, and I have a right to eat a cheeseburger and drink Coca-Cola,’” she recalled, adding: “I don’t even like cheeseburgers.”

Along with this agitated hyperactive delirium, she experienced internalized hypoactive delirium. In a recovery room after leaving the ICU, she would stare for 10 to 20 seconds when asked basic questions, said Hageman, adding, “Nothing was quite processing.”

Victory managed to take a picture of herself with nasal oxygen tubes and a forehead scar, post it on Facebook and write “I’m alive” in Vietnamese so her parents in Vietnam would know she had survived. But another day, she called her husband, Wess Victory, 15 or 20 times, repeatedly saying, “I give you two hours to come pick me up.”

“It was heartbreaking,” said Wess Victory, who patiently told her she could not be released yet. “For four or five days, she still couldn’t remember what year it was, who the president was.”

Finally, he said, “something clicked.”

Now, to help overcome the fallout from the experience, she has started taking an antidepressant her doctor prescribed and recently saw a psychologist.

“People think when the patient got well and out of the hospital, it will be OK, it’s over,” Kim Victory said. “I worry if the virus didn’t kill me back then, would that have affected my body enough to kill me now?” 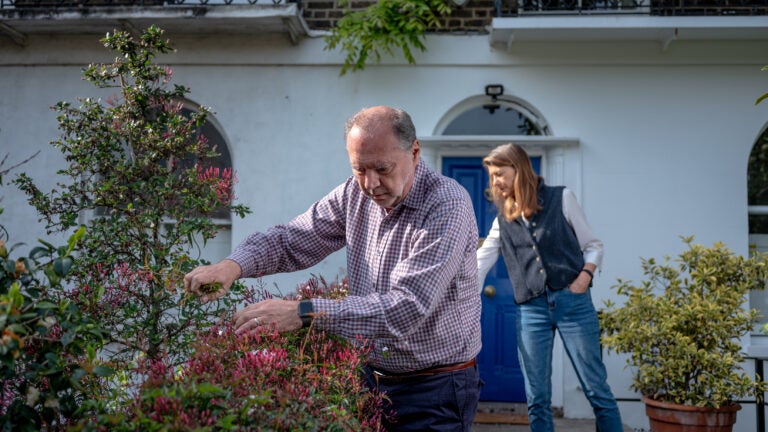 A virus-hunter fell prey to a coronavirus he underestimated