FREEHOLD, N.J. — Each morning they awake with fingers curled inward, stiffened like claws.

Their schedules are dictated by doctors’ appointments, physical therapy sessions and bouts of exhaustion. After weeks on ventilators, two siblings remain too weak to work even as their medical bills mount.

But at a table filled with several members of a tight-knit New Jersey family, the Fuscos, who lost five relatives to the coronavirus, the conversation repeatedly veers away from the chaos and pain of the past three months.

They do not avoid talk of their family’s devastating collective loss. But they also speak of a new focus: finding a remedy for the disease that killed their mother, three siblings and an aunt.

At least 19 other family members contracted the virus, and those who survived COVID-19 did not emerge unscathed.

Joe Fusco, 49, lost 55 pounds and spent 30 days on a ventilator. His sister, Maria Reid, 44, cannot shake the memory of the disjointed hallucinations that dogged her during the 19 or 20 days she was unconscious, or the terror of waking up convinced that her 10-year-old daughter was dead.

“I want to help somebody,” he added. “I don’t want anyone else to have to lose five family members.”

The Fuscos were unwilling pioneers charting an early course through all that was unknown about a virus that has killed more than 126,000 people in the United States.

They are now trailblazers of another kind, subjects of at least three scientific studies.

Johns Hopkins University School of Medicine is conducting research that involves evaluating the DNA of the surviving and deceased members of the large Italian American family for genetic clues. DNA from those who died will be retrieved from hairbrushes, a toothbrush, a blood sample and tissue from an unrelated gallbladder surgery.

Each Thursday, Elizabeth Fusco, the youngest of the 11 children, donates antibody-rich blood plasma that is used to treat patients with the virus to determine if it can help boost their immune response.

“We know another wave is going to come,” Elizabeth Fusco said. “It’s inevitable. Whatever will help this world is all I care about.”

Their help may prove useful well before the predicted second wave hits as states like Florida and Texas confront an alarming surge in new cases.

The Fusco family’s trauma began just before the state’s lockdown, as a slow cascade of closures marked the start of a new normal.

On March 13, Rita Fusco Jackson, 56, became the second person to die of COVID-19 in New Jersey, which has since recorded 14,992 deaths, making it No. 2 in the nation behind New York for virus-related fatalities.

Their story became an urgent, cautionary tale about the potency of the disease and the importance of staying apart at a time when social distancing was still a novel concept.

During the first week of March, Carmine Fusco, the eldest son who was visiting from Pennsylvania, had described feeling chilled during a routine Tuesday dinner in Freehold that drew about 25 family members, his siblings said.

The precise source of the extended family’s infection is unclear, said Joe Fusco, a horse owner like his father and brothers who had spent time in the weeks beforehand with both brothers who died. He recalls waking up feeling “beat up” the morning after the dinner, which was held at the house where his mother lived with three of his siblings and their families.

He was admitted to the hospital days later, beginning a medical odyssey that would last 44 days. Much of the treatment was experimental, he said, and involved trial and error.

“When I was leaving the hospital, the doctor said, ‘You don’t realize the debt of gratitude the world owes your family,’ ” said Joe Fusco, the father of three children ages 10 to 18.

As news accounts of their story swept the globe, the family was cited by state health officials as a prime reason for staying apart.

Still, even as they were being held up as the family no one wanted to become, Elizabeth Fusco was stepping into the role of the little sister everyone might hope to have.

Elizabeth Fusco, 42, and her daughter were among those who contracted the virus; like many other family members, they never showed symptoms.

With four people already dead, two on ventilators and a sister hospitalized and receiving oxygen, Elizabeth Fusco emerged as a ferocious advocate, even as she feared for her own daughter, Alexandra, who is 12 and was born with a serious health condition, congenital diaphragmatic hernia.

“They would tell me to calm down,” she said. “No. I’m not going to calm down. Tell someone who didn’t lose a mom, a sister and two brothers in a matter of less than seven days to calm down.

“Tell me how you’re going to save my brother and sister.”

The family held a four-person funeral April 1. They remain anguished that the two siblings who were on ventilators at the time were not there and are planning a memorial celebration and burial after a full Mass in early August.

Elizabeth Fusco said she temporarily shoved mourning aside. “I consumed my time with — I’m not going to lose another one,” she said.

Desperate, she and other relatives pushed doctors to try a variety of treatments: remdesivir, convalescent plasma, hydroxychloroquine.

“I don’t care if you were giving them rat poison — if you told me that that was going to fix them,” she said, her voice trailing off.

She called the governor on his cellphone. She and her mother’s cousin, Roseann Paradiso Fodera, a family spokeswoman, were on a first-name basis with congressional aides. They lobbied anyone who would listen for access to experimental medicines, and, later, for autopsies that never happened.

In that mad flurry, they were buoyed by neighbors, acquaintances half a world away and lifelong friends.

“You’d open your door,” said Dana Fusco, Joe’s wife. “You’d have groceries at your door. You’d have meals. The community was truly amazing.”

The nurses and the medical staff at CentraState Medical Center, the hospital in Freehold where Grace Fusco and five of her children were treated, served as the family’s eyes, ears and loving hands at a time when visitors were not allowed inside.

“For 44 days, every three to four hours, I was on the phone with them,” Dana Fusco said. The hospital declined to comment, citing privacy concerns.

When her husband awoke Easter Sunday, she asked that he not be immediately told of the deaths. Once he was stronger, she was allowed a visit to tell him in person.

More than three months later, a numb calm has set in.

Dwelling on the past, she said, is a luxury she does not have. “I’ve got to move on,” said Reid, who, along with her husband and daughter, shares a house with Joe’s family. “I’ve got a young daughter.”

Joe Fusco said he remained frustrated by the lackadaisical attitudes of people shown crowding together near beaches or outside bars without masks.

“These idiots are out there and not taking precautions,” he said. “Not wearing a mask. And not doing what they’re supposed to do. They’re out of their minds.”

Doctors say patients who recover from COVID-19 frequently need to rebuild muscle strength, and some may struggle with a range of respiratory, cardiac and kidney problems or be at increased risk of blood clots and stroke. Some patients who experienced delirium while on ventilators may be at greater risk of depression.

And those placed in induced comas also may lose muscle tone in their hands, causing fingers to clamp shut.

Much about the recovery from COVID-19 is unknown, said Dr. Laurie G. Jacobs, chairwoman of the Department of Medicine at Hackensack University Medical Center, which is setting up a clinic for patients recovering from COVID-19 to better understand, track and treat their varied needs.

Joe Fusco said he found the seeming absence of uniform guidance for doctors treating patients recovering from COVID-19 frustrating. His doctor has ordered a battery of tests, he said, but his sister’s has not.

“You’d think there would be some sort of protocol to follow, but there’s not,” he said.

When Grace Fusco got sick enough to need a ventilator, she asked for a pillow that had belonged to her husband, who died in 2017, her rosary beads and a scapular, a small cloth pendant worn during prayer. She reminded her daughter to bring a tray of chicken the next night to the program for homeless people that she cooked for each week.

“She said, ‘Don’t worry. I’m going to be OK,’ ” Elizabeth Fusco recalled. “Tell everyone I love them.”

She never awoke, and never knew that any of her children had died.

“It would have killed her,” Joe Fusco said. “She was always — and I’m the same way — there’s a sequence to life, and burying your kids is not part of it. 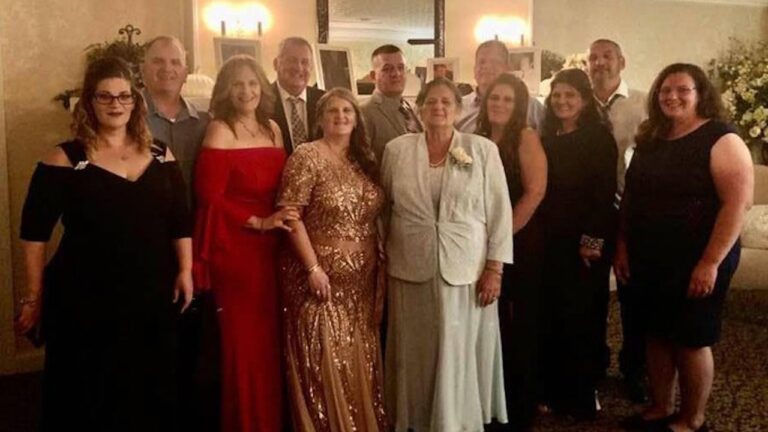