On June 17, a crowd of up to 100 people, most of them in their early 20s, attended a party at a home in Rockland County, New York, just north of New York City.

The event violated a state order in effect at the time that capped gatherings at 10 people in an effort to slow the coronavirus’ spread.

For local officials, that was just the start of the problem.

The party’s host, who was showing signs of being sick at the time, later tested positive for the virus. So did eight guests. County officials, eager to keep the cluster from growing, dispatched disease tracers to try to learn who else might have been exposed to the virus at the party.

The tracers hit a wall.

“My staff has been told that a person does not wish to, or have to, speak to my disease investigators,” Dr. Patricia Schnabel Ruppert, the county’s health commissioner, said Wednesday. Of those being contacted about the party, she added: “They hang up. They deny being at the party even though we have their names from another party attendee.”

Frustrated by the response, county officials on Wednesday took the unusual step of issuing subpoenas to eight people who they believe were at the June 17 party. Those who do not comply and share what they know by Thursday will face fines of $2,000 a day, officials said.

In addition to the June 17 party, in West Nyack, officials said they had learned of two other recent large parties nearby where some guests might have overlapped, heightening the risk of a wider transmission. Both parties were in New City — one on June 20; the other on June 27.

Adding to the urgency of learning as much as possible about how widely the virus may have spread at the parties, officials said, was a tip from people who have cooperated about at least one more large party being planned in the area for the Fourth of July weekend.

“I will not allow the health of our county to be compromised because of ignorance, stupidity or obstinance, or anything else,” Ed Day, the Rockland County executive, said at a news conference, where Ruppert also spoke.

Tracking down everyone who has had contact with an infected person is considered crucial to containing the spread of an illness, but the effectiveness of such efforts can be limited.

In New York City, where 3,000 disease detectives and case monitors had been hired by last month, early data showed that only about 2 in every 5 people who had tested positive for the virus or were presumed to have it shared information about close contacts with tracers.

This is the second time in recent years that Rockland County officials have had to resort to subpoenas to compel cooperation from residents amid a push to halt a disease outbreak. A similar step last year in the face of a measles epidemic proved to be successful, officials said.

Both New City and West Nyack are in the Town of Clarkstown. George Hoehmann, the town supervisor there, said Wednesday that town officials were unaware of a local uptick in virus cases until Day had told him about those linked to the June 17 party only minutes before the county executive’s news conference.

Hoehmann also said that the town’s Police Department was prepared to enforce limits on gatherings or any other restrictions prompted by the virus outbreak, but that county officials had shared little information so far about what specifically they should be watching for.

Ruppert, speaking at the news conference, emphasized the continuing public health threat that the pandemic poses, even in areas like Rockland County, where the numbers of infections, hospitalizations and deaths are well below what they were in March and April.

The county has recorded just over 13,600 confirmed virus cases and 668 deaths since the outbreak began. As of Wednesday, official data showed, five people in the county were hospitalized with confirmed cases of the virus, and five others were suspected of having it.

As evidence for why precautions must still be taken, Ruppert cited the recent surge in cases in states that reopened more quickly than New York.

And while she urged those who had not cooperated with investigators so far to think of older relatives and younger siblings who might be more susceptible to the virus’s worst effects, she also had a message for the partygoers themselves.

“You may wish to be invincible, but you’re not,” she said. “None of us are against this dreadful disease.” 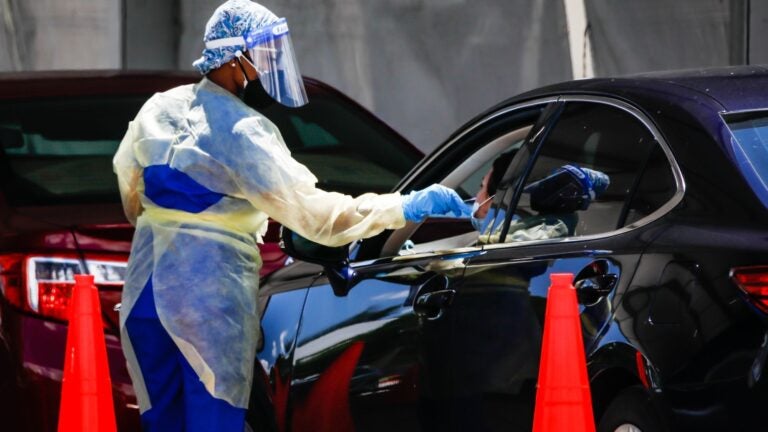