At just 17, Carsyn Leigh Davis had already experienced more challenges than most people face in their entire lives. From the age of 2, she battled a host of health issues, including cancer and a rare autoimmune disorder. But not once did Carsyn let the serious ailments get her down, her family said.

So when the high school student from Fort Myers, Fla., died last month after contracting the novel coronavirus, her death — which marked Lee County’s youngest virus-related fatality at the time — sent shock waves through the community. Touching tributes to Carsyn, often pictured smiling broadly, poured forth and thousands of dollars were donated to GoFundMe campaigns.

“Even through the ravages of COVID, fighting to breathe, she never once shed a tear, complained or expressed fear,” her mother, Carole Brunton Davis, wrote in a statement shared on one of the fundraising pages.

A medical examiner’s report recently made public, however, is now raising questions about Carsyn’s case. The Miami-Dade County Medical Examiner found that the immunocompromised teen went to a large church party with roughly 100 other children where she did not wear a mask and social distancing was not enforced. Then, after getting sick, nearly a week passed before she was taken to the hospital, and during that time her parents gave her hydroxychloroquine, an anti-malarial drug touted by President Donald Trump that the Food and Drug Administration has issued warnings about, saying usage could cause potentially deadly heart rhythm problems.

Carsyn’s case, which gained renewed interest on Sunday after it was publicized by Florida data scientist Rebekah Jones, drew fierce backlash from critics, including a number of medical professionals, who condemned the actions taken by the teen’s family in the weeks before her death. Florida has more than 206,000 reported cases of coronavirus and 3,880 deaths as of early Tuesday.

In a scathing write-up on her Florida COVID Victims site, Jones described the church gathering as a “COVID Party.” She alleged that Brunton Davis took Carsyn to the event to “intentionally expose her immuno-compromised daughter to this virus.”

Brunton Davis and the church reportedly behind the event could not be reached for comment late Monday night.

As Brunton Davis wrote in the statement after Carsyn’s death, the teen did not have an “easy life,” largely due to her health complications. In addition to cancer and the autoimmune disorder, she also suffered from obesity and a nervous-system disorder that improved when she was 5, the medical examiner’s report stated.

Still, Carsyn remained active in her community, her family said. She was a member of her high school’s varsity bowling team and dedicated time to volunteering with organizations such as Special Olympics. As an honor student, she excelled in school and particularly enjoyed her AP photography class.

Carsyn’s family also noted that she was “a devout Christian and follower of Jesus,” and “actively involved in Youth Church at First Assembly of God in Ft. Myers.”

On June 10, Carsyn was one of dozens of young people who attended the church event mentioned in the report. While the report did not include specifics about the gathering, Jones shared images of a June 10 post from the First Youth Church’s Facebook page advertising an event scheduled for that night called a “Release Party.” The church’s page has since been taken down.

“Service is back and better than ever!” the post said. “There will be games, awesome giveaways, free food, a DJ and music, and the start of our new sermon series.”

Church called their covid party a “Release Party,” and hosted hundreds of people, including more than 100 children, often wrote about covid being God’s will pic.twitter.com/UrODqAozMX pic.twitter.com/zNvrt9tXOQ

The medical examiner wrote that Carsyn’s parents gave her azithromycin as a preventive measure from June 10 to June 15. The antibiotic in combination with hydroxychloroquine has been floated by Trump as a potential coronavirus treatment. According to the report, Brunton Davis is a nurse and a man identified as Carsyn’s father is a physician assistant.

But while she was taking the medicine, Carsyn began feeling ill, developing a headache, sinus pressure and a mild cough, the report said. Then, on June 19, Brunton Davis noticed that Carsyn “looked ‘gray'” as she slept, prompting the mother to hook her daughter up to oxygen normally used by Carsyn’s grandfather, who has chronic obstructive pulmonary disease, or COPD.

At some point, Carsyn was also given a dose of hydroxychloroquine by her parents — an action that came less than a week after the FDA pulled its emergency use authorization for that drug and chloroquine, another anti-malarial medication. A letter dated June 15 stated that the drugs “were unlikely to be effective” for covid-19 and that any potential benefits were outweighed by safety risks, including heart problems, The Washington Post’s Laurie McGinley and Carolyn Y. Johnson reported.

It remains unclear whether Carsyn had a prescription for hydroxychloroquine.

Not long after the oxygen and hydroxychloroquine were administered, Carsyn’s parents took her to a local medical center. She was later transferred to the pediatric intensive care unit at a nearby children’s hospital, where she was confirmed to have the coronavirus.

Carsyn’s parents declined to have her intubated, and she instead started receiving plasma therapy, the report said. But by June 22, her condition wasn’t improving and “intubation was required,” the medical examiner wrote.

Despite “aggressive therapy and maneuvers,” Carsyn still didn’t get better, leading Brunton Davis to request “heroic efforts” even knowing that her daughter “had low chance of meaningful survival,” according to the report.

But none of the procedures worked and Carsyn continued to deteriorate. She died shortly after 1 p.m. on June 23, two days after her 17th birthday.

“We are incredibly saddened by her passing at this young age, but are comforted that she is pain free,” Brunton Davis wrote in the GoFundMe statement.

Jones, however, argued that Carsyn’s death could have been prevented.

“I started looking into her mother, the church where the COVID party was held with more than 100 children, her health history, and who she was and I felt so angry and sad that this happened,” she told Newsweek.

On Twitter, Jones shared images of posts from a Facebook profile with Brunton Davis’s name, which is no longer online. One post expressed support for anti-mask efforts and another criticized the methods doctors were using to treat Carsyn.

“The doctors are refusing to give her Hydroxychloriquine [sic], citing ‘new studies’ that it does not work and can be harmful. Using it is against their policy,” the post read. “This is very upsetting to me, as many of you know how I feel about that.”

On Sunday, Jones, who created the independent coronavirus dashboard after she said she was fired by the Florida Department of Health in May for refusing to make changes to how the state presented its data publicly, wrote that she was “so saddened for this girl and the loss of life.”

“Every death on this website is heartbreaking. Every minute lost in someone’s life is a tragedy,” she wrote, referring to her database. “But this one will stick with me long after this virus has torn through our communities.” 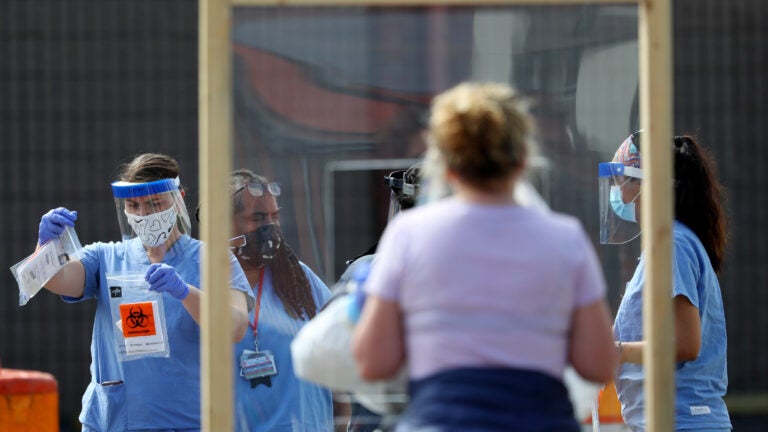