Researchers around the world are working on the next generation of coronavirus tests that give answers in less than an hour, without onerous equipment or highly trained personnel.

The latest so-called point-of-care tests, which could be done in a doctor’s office or even at home, would be a welcome upgrade from today’s status quo: uncomfortable swabs that snake up the nose and can take several days to produce results.

The handful of point-of-care devices now on the market are frequently inaccurate. The up-and-coming tests could yield more reliable results, researchers say, potentially leading to on-the-spot testing nationwide. But most of the new contenders are still in early stages, and won’t be available in clinics for months.

Some of the tests in development swap brain-tickling swabs for plastic tubes that collect spit. Others dunk patient samples into chemical cocktails that light up when they detect coronavirus genes. Another type of test identifies coronavirus proteins in minutes, using a cheap device that’s easy to produce in bulk and deploy in low-resource settings.

“To combat this virus, we need to test widely and frequently, and get the results back quickly,” said Dr. Zev Williams at Columbia University, who is developing a coronavirus spit test that can run in about 30 minutes. “That requires a genuine paradigm shift in the way we go about testing for it.”

Once scaled up and distributed, faster tests could be used in hospitals to quickly screen emergency room patients. Schools and workplaces could buy them to monitor the health of children and employees. With additional tinkering, some tests could even be developed to work as simply as a pregnancy test, yielding a clean-cut positive or negative result in the comfort of a person’s home.

“The quicker and easier tests can be done,” the more ubiquitous they can be, said Dr. Amesh Adalja at the Johns Hopkins University Center for Health Security. “That’s going to help people get back to some semblance of normalcy.”

Most diagnostic tests on the market now hunt for bits of genetic material specific to the coronavirus. (This distinguishes diagnostic tests from antibody tests, which sample the blood and show if a person has been exposed to the virus in the past.)

The gold-standard method involves funneling a long, absorbent swab a few inches into the nose until it hits the nasopharynx, the part of the airway where the nasal passage meets the throat and a common target of the coronavirus.

“The moment you see the swab, you’re like, ‘Oh no, my face isn’t that deep,’” said Fernanda Ferreira, a virologist at Harvard University who took a nasopharyngeal swab test in April. “Turns out it is.”

The virus’ genes must be extracted from the sample with a specific suite of chemicals. The material is then processed through a laboratory technique called polymerase chain reaction, or PCR, in which a machine cycles through several temperature changes to amplify genetic material. This step is key to these tests’ success: Copying genetic material over and over means that even tiny amounts of the virus can be spotted.

But the process can bog down at multiple points. Swabs and chemicals necessary for processing are often in short supply, and invasive sampling requires trained health care workers who quickly drain precious supplies of gowns, gloves and masks. Additionally, many community testing centers lack PCR machines and must outsource their samples to large laboratories, leading to delays of days or even weeks.

Rachel Coker, the director of research advancement at Binghamton University — one of many institutions nationwide that have begun to reopen — had to wait 10 days for her results after being sampled at a drive-thru testing site.

“The good news was it was negative,” she said. But she could have been exposed while waiting for results. “By the time I knew,” Coker said, “it was almost useless.”

Researchers are attempting to streamline every part of the diagnostic pipeline. One timesaving tactic that’s already been rolled out nationwide involves sampling areas other than the nasopharynx, such as swabbing the nostrils or throat, or collecting gobs of saliva.

These tests are painless, and avoid putting health care workers in harm’s way. But they aren’t always accurate. “Unfortunately, this virus doesn’t hang around in the nose or throat so much,” said Dr. Ravindra Gupta, a clinical microbiologist at the University of Cambridge.

To avoid mistakenly declaring infected people virus-free, Gupta and his colleagues are developing a point-of-care test that can simultaneously screen patients for the coronavirus and antibodies that recognize it. Antibodies often start to appear by the second week of infection.

At the Broad Institute in Cambridge, Massachusetts, another team of researchers is tackling the next plodding step in the workflow: amplifying the sample. In the lab, the scientists use a technique that, unlike PCR, can copy genetic material at a single temperature. If the virus is present, a gene-editing tool called Crispr will make the tube’s contents glow at a wavelength detectable by a smartphone. The entire procedure takes less than an hour, and correctly identifies active infections about 90% of the time.

Laboratory experiments that use Crispr are thought to be very precise, potentially giving these tests a low rate of false positives, said Catherine Freije, one of the scientists developing the Crispr test. The molecular machinery in the test is specific to the new coronavirus, and doesn’t react to its close viral relatives.

The test cooked up by Columbia University’s Williams and his colleagues might be simpler still: Spit is added to a premixed slew of chemicals, which then gets incubated at 145 degrees Fahrenheit for half an hour. If the tube turns yellow, the test is positive; if it’s red, negative. The test can detect even tiny amounts of virus, making it more sensitive than similar tests, and gives false negatives less than 5% of the time, according to a study that has not yet been published in a scientific journal. Williams and his team are seeking authorization from the Food and Drug Administration.

Researchers are still gauging how the accuracy of spit tests stacks up against that of the deep nasal swabs, but early results are promising. “You put it in a tube — that’s hard to mess up,” said Anne Wyllie, an epidemiologist at Yale’s School of Public Health who is studying the saliva tests.

Still, the quick tests available now are frequently inaccurate. Although they “ensure we can get an answer faster,” said Dr. Ibukun Akinboyo, a pediatrician and infectious disease specialist at Duke University’s School of Medicine, “you lose some sensitivity. It’s hard to win at both.”

Last month, a swab-based point-of-care test called Abbott ID Now made headlines when an analysis found that it might miss infections up to 48% of the time, despite being promoted by President Donald Trump as “highly accurate.”

Sensitivity issues also plague antigen tests, which detect pieces of proteins made by the virus, rather than its genes. Antigen tests have been used to detect other airway infections, such as the flu, in less than an hour, and are easy to manufacture en masse. But the convenience comes at a cost: Unlike genetic material, antigens can’t be amplified easily. Some antigen tests, including a few that search for influenza viruses, fail to pick up on active infections around 50% of the time.

“If a COVID antigen test performs like an influenza antigen test, I don’t think they will have much utility,” said Dr. David Alland, the director of the Center for Emerging Pathogens at Rutgers New Jersey Medical School. Still, he noted, “if improved, they could be very promising.”

Even imprecise tests have their place in this pandemic, as long as they’re easy to use and distributed widely enough. Should a test “miss someone on Monday, maybe you’ll get them a day or two later,” Wyllie said.

So far, only two companies have received emergency authorization from the FDA for coronavirus antigen tests. One is Quidel, which is, according to a representative, producing millions of tests each month, many of which have been distributed to urgent care centers and medical clinics in the United States. On Monday, a second firm, Becton Dickinson & Co., also entered the fray with a point-of-care antigen test that can reportedly produce results in 15 minutes. While speedy, both Quidel’s and BD’s tests may produce false negatives between 15% and 20% of the time.

Other antigen tests have made headway overseas, and experts estimated that several more will likely seek clearance in the U.S. in coming months.

One will likely come from medical device manufacturer OraSure, which has made antigen tests for HIV and Ebola. Stephen Tang, OraSure’s president and chief executive officer, said his team is brewing up a “secret sauce” that will make their coronavirus test highly accurate, while still producing results within half an hour, but declined to specify details.

Until these experimental tests are widely available, many people will still need the nasty nasal swab.

“For any kind of normal life to resume, I think all of us need to get this idea that we’re going to have to get tested all the time,” Binghamton’s Coker said.

A faster, less invasive test would be nice. But even an unpleasant test is better than no test at all, she said. “If it’s this painful one, so be it.” 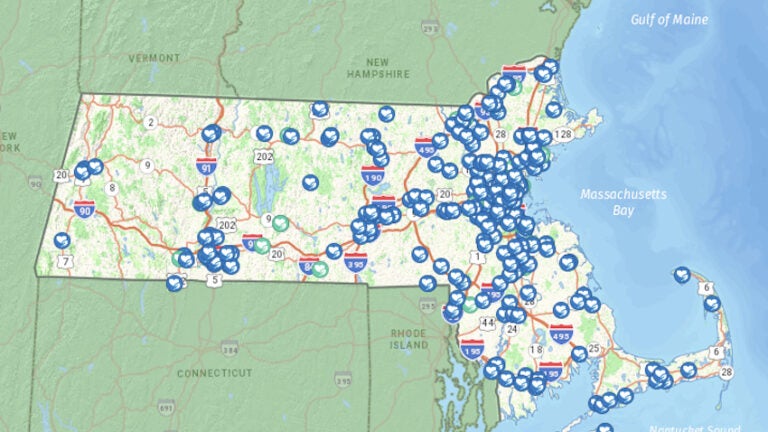 Map: Here’s where you can get tested for COVID-19 in Massachusetts