Boston Mayor Marty Walsh announced Friday that Phase 3 for the city’s reopening will begin Monday, a week after the state’s third phase kicked off.

The mayor said during a press conference the city is moving into its own third step in reopening with both “caution and confidence.”

“We took an extra week here in Boston, as most people know, to take extra steps due to our unique concerns here in the city,” he said.

Somerville announced Friday it would delay the start of its Phase 3 reopening until July 20. Somerville Mayor Joseph Curtatone told CBS Boston he didn’t want to rush the step in reopening, calling it the “riskiest phase so far.”

But Walsh noted there are some areas where Boston will continue to take a different approach from state guidelines.

“Despite the state guidelines allowing larger gatherings, we will not be hosting public or private meetings in City Hall or any other city building at this point,” the mayor said. “We’ve had success with online meetings and we’re going to continue that way for the time being.”

Libraries in Boston will also remain closed — even though the state’s Phase 3 reopening guidelines allow them to open for in-person browsing. But Walsh emphasized the Boston institution is continuing to expand its “BPL to Go” program, which allows library card holders to place orders and pick up materials outside library branches.

The city’s limit for outdoor events also diverges from state guidelines. Boston is limiting attendance at outdoor gatherings to 50 people, while the state sets a limit of 100.

Permitting for low and moderate contact sports and other events will also begin Monday in Boston, Walsh said.  And while high contact sports, such as basketball, lacrosse, and football are not permitted until the second step of Phase 3, skilled practices for the sports will be allowed to start.

“You won’t be able to play a game, but you’ll be able to get out there and start practicing with the young people,” the mayor said.

Walsh said the city is moving forward with the third phase only because people have been “doing the right things” to help slow the spread of the virus.

“We have to continue to do the right things,” Walsh said. “For our businesses and nonprofits, that means carefully planning and implementing public health guidelines. For individuals, it means wearing a face covering whenever you’re out in the public, keeping six feet distance from other people, avoiding large crowds. Wash your hands often with soap and warm water. Clean your surfaces that are frequently touched. We’re moving forward with caution, because we’re seeing what’s happening in other states when they rush.”

The mayor pointed to the surges in cases being in seen in Florida, Texas, and California which have contributed to the U.S. seeing 70,000 new cases in a day for the first time on Friday.

“Those highs are because the residents and the people there didn’t take the precautions that we have in Boston and Massachusetts,” Walsh said.

As of Friday in Boston, 13,673 city residents have tested positive for COVID-19. According to the city, 9,683 people have recovered from the virus, while 715 residents have died.

“We’re monitoring not only the number of cases, but we’re also monitoring the positive percentage,” Marty Martinez, Boston’s health and human services chief, said at Friday’s press conference. “Cases are going to fluctuate depending on how many folks are tested each day, but we monitor the overall percentages, we monitor the seven-day averages, we also look at the hospitalizations. And all of that’s really important to see if we see any increased COVID activity. As of right now, we don’t see any increased activity of concern, but with things opening we want to make sure we monitor that and that we stay on top of that ongoing.”

Walsh said with the reopening, his biggest concerns are tied to any indoor activities, such as gyms and indoor dining. But as long as business owners and individuals follow the guidelines for social distancing, cleaning, and face coverings, the mayor said the city “should be OK.”

“The coronavirus is still very much here, so we have to be careful as we start opening up,” he said. 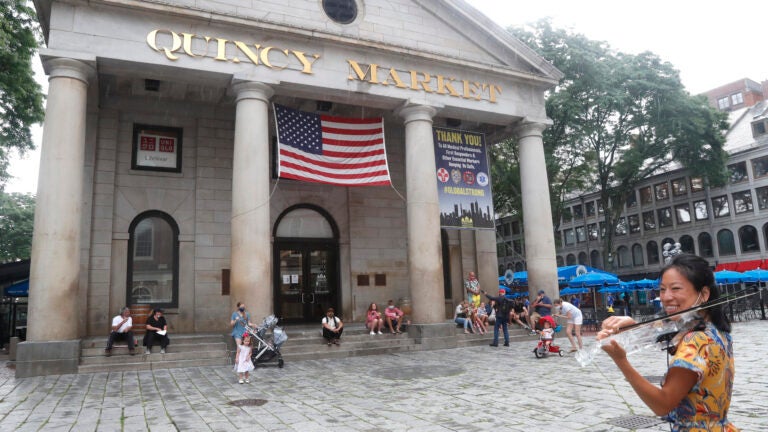