In an interview with The Journal of the American Medical Association on Tuesday, the CDC’s Robert Redfield said the surge in cases may have been caused by Northerners traveling south for vacation around the Memorial Day weekend.

“If you look at the South, everything happened around June 12 to June 16. It all simultaneously kind of popped… We’re of the view that there was something else that was the driver,” Redfield said, according to CNBC, of whether the reopening plans of states was a factor. “Maybe the Memorial Day, not weekend, but the Memorial Day week, where a lot of Northerners decided to go South for vacations.”

According to the network, Redfield didn’t provide any data to back up the theory.

“Something happened in mid-June that we’re now confronting right now,” Redfield added later. “And it’s not as simple as just saying it was related to timing of reopening or not reopening.”

In a thread on Twitter late Tuesday, Jha expressed concerns about the CDC director presenting such a theory, which he said is based on false reasoning.

“First, infection rates don’t explode around June 12 to 16,” the Harvard doctor wrote. “Most of southern states saw infections start rising around June 1, about a week after [Memorial Day] weekend started.  Not June 12-16 as Bob Redfield says.”

To debunk the theory, Jha pointed out that many of the states, including non-southern states Alaska, Idaho, and Oregon, relaxed shutdown rules around the same time and began to see case counts rise within a similar timeframe. He questioned how the “northern vacationers” didn’t seed cases in their home states before their alleged trips.

“Bottom line is that this is silliness,” he said.

“Not sure why @CDCDirector is pursuing this argument,” Jha concluded. “Either he’s looking at bad data or is learning the wrong lessons. Northern vacationers not cause of big national outbreaks. We have to get better at managing the pandemic. Drawing wrong lessons is harmful to that goal.”

A leading public health expert during the pandemic, Jha has stressed that stages for reopening must be rooted in data and evidence that states are controlling their outbreaks.

That’s right, Dr. Redfield says folks from the north drove down south for vacation at end of May, after Memorial Day, and infected southerners.

He offers no evidence. Says “everything happened around June 12-16”

So can we glean anything from the data?

And here’s the original interview with Dr. Bauchner. Around 26:10,https://t.co/H8yCFFODGZ

But here’s the kicker

Alaska, Idaho, Oregon, also start rising around the same time — within a week of Memorial Day

Did northern travelers vacation in Idaho, Alaska, Oregon and seed cases there too?

Is it a coincidence many of these states relaxed around the same time?

Not sure why @CDCDirector is pursing this argument

Northern vacationers not cause of big national outbreaks

We have to get better at managing the pandemic.

Drawing wrong lessons is harmful to that goal 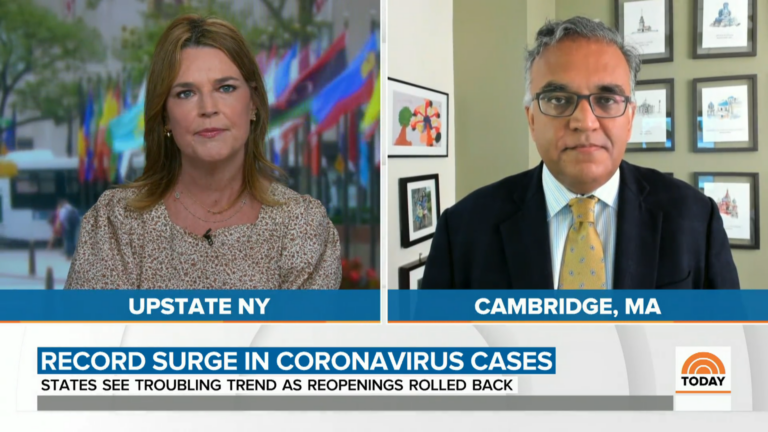 Top Harvard doctor: Florida and other states ‘opened up too early and too aggressively’