Boston emergency room doctor and state Rep. Jon Santiago has no doubt that Massachusetts will see a second surge in coronavirus cases, which is why he’s filed a bill with measures aimed at preparing for and controlling new infections as the state continues with reopening the economy.

“It’s not a matter of if, but when,” Santiago told Boston.com of his concerns about a second surge in COVID-19 cases in Massachusetts. “The question is how big that will be.”

The Boston Medical Center physician co-sponsored the legislation, filed Monday in the House and Senate, with Rep. Mindy Domb and Sen. Harriette Chandler. The bill lays out five proactive measures, including a mask mandate and enforcing quarantines for travelers from other states with high rates of infection, that can be taken to minimize, if not prevent, a second surge.

Santiago noted that Massachusetts has made “incredible strides” to control the spread of the virus in the state, pointing to the decline in the number of hospitalizations and an average positive test rate of less than two percent.

But the emergency room doctor stressed that doesn’t mean the state is in the clear.  The metric he’s already concerned about in Massachusetts is the reproductive number  — the number of new cases generated by one person with COVID-19. Anything higher than 1 suggests there is active transmission of the disease.

For Massachusetts, the reproductive number was about 0.75 a few weeks ago and now it’s just over 1, which is concerning, Santiago said.

“All you have to do is look around and see what’s going on around the country to raise your concern,” the Boston doctor said. “We have what seems like a record number of new infections every day in states and counties and cities across the country. And it’s important to note that we don’t live in isolated states — we don’t have border walls. And that travel, people visiting your state or city, can easily lead to a second superspreader event or a possible resurgence of the virus. And that’s why we have to be incredibly vigilant here in Boston and here in Massachusetts.”

California, he noted, is a state that took shutdown measures early and controlled the spread of the virus, but is now seeing a resurgence after starting to reopen. The spike in new cases prompted officials to roll back reopening measures as the state again works to clamp down on the virus outbreak.

“Some of the other states in the South and the Sunbelt never took coronavirus very seriously to begin with — they didn’t pay attention or follow reopening rules and regulations  — and as a result they’re in the state that they’re in right now,” Santiago said.

He hopes his bill, with its five strategies, will help amplify the measures that are key for preventing a resurgence of COVID-19 as Massachusetts continues to reopen.

“In lieu of a vaccine, which we don’t have, which is months away, we need to really implement and institute policy and regulations that really encourage behavior change,” Santiago said.

The first provision would mandate masks or face coverings be worn in any indoor or outdoor public settings, which would be enforced by local boards of health with violators facing fines of up to $100. The second measure would require anyone traveling to Massachusetts from a state seeing a high rate of infection to quarantine for 14 days or face a penalty of up to $1,000, which would also be enforced by local boards of health.

The bill also prioritizes COVID-19 testing for vulnerable communities, such as elderly patients and essential workers, mandates the development of a plan for enforcing COVID-19 workplace standards, and requires a plan for making sure local health boards have what they need to combat the virus.

“This is fundamentally about how do we avoid a second surge in Massachusetts,” Santiago said of the bill. “We don’t want to forfeit the gains that we’ve made as a society. We worked really hard, and there was a lot of shared sacrifice to get to the place where we’re at now — we don’t want to go backwards. So in order to avoid that we need to believe in and practice mask-wearing, self-quarantining, and making sure that we’re testing as widely as we can, while making sure that local boards of health and essential workers have the resources they need to reenter the economy and protect their communities.”

I worked every week during the #covid19 surge and saw the pain, grief, and loss of life caused by the virus. We must act now to stop a 2nd surge. Proud to file critical covid19 legislation with @Sen_Chandler & @MindyForMA to avoid a #coronavirus resurgence. pic.twitter.com/OGuot0oiOE

The mask and quarantine measures are similar to advisories Gov. Charlie Baker has set in place in the state through executive orders, but Santiago said codifying the mandates would elevate the requirements for the public.

“We need to be speaking about preventative public health measures just as much as we are about reopening the economy — they’re intertwined,” the state representative said. “We can’t talk about reopening an economy, helping small businesses, without realizing that our fates are intertwined. We can protect each other with masks, with practicing hand-washing and quarantining, and making sure those businesses have the guidance and the resources to come back and participate in today’s economy.”

Having the preventative measures mandated at the state level is especially important, the emergency room doctor pointed out, as in the next couple months discussions will continue related to the reopening of schools and colleges.

“We’re expecting to have thousands and thousands of people potentially come to our state and city from across the entire country, if not world,” the state representative said of colleges and universities alone. “That can lead to an increase in transmissibility of the virus. Because in the midst of all this traffic and movement, we’re reopening the economy. We just entered Phase 3 here in Boston this past week, across the commonwealth the week before. So there’s no doubt as you begin to reopen the economy, as you begin to see people out and about, the risk for increasing transmissibility increases.”

An added concern, Santiago said, is that it seems to him that people are being less careful about wearing face coverings and with social distancing recently.

“We know that countries that have instituted mandatory mask regiments — and states and cities that have done so — it will decrease transmission of the virus,” the physician said. “And again, in lieu of a vaccine implementing behavior change policies such as mask wearing, to self quarantine when you come in, can help decrease the likelihood of a second surge here in Massachusetts.” 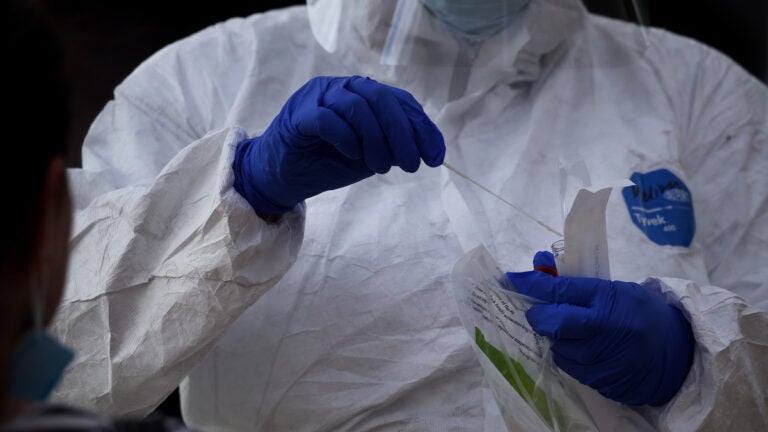