“Short term, I think it’s fair to say we really have not distinguished ourselves in a positive way by how we responded to the crisis when it was upon us,” Romney said in a video interview with the Sutherland Institute. “And the proof of the pudding of that is simply that we have 5 percent of the world’s population but 25 percent of the world’s deaths due to covid-19.

“And there’s no way to spin that in a positive light,” Romney added.

At least 166,000 people nationwide have died of coronavirus-related complications – about 21 percent of the worldwide death toll. An additional 1,222 U.S. deaths were reported Friday and 1,218 were reported Saturday as of late evening.

Here are some other significant developments:

– The number and rate of infections in children under 17 have increased since March, the Centers for Disease Control and Prevention said in recently updated guidance, underscoring the risk for young people and their families as schools weigh whether to reopen with in-person instruction. Although the virus is far more prevalent and severe among adults, the true incidence of infection in U.S. children remains unknown because of a lack of widespread testing, according to the agency.

– New York continued to report progress against the virus after experiencing the country’s most severe outbreak in the spring. Hospitalizations reached their lowest point since March 17, officials said. The state reported a record 88,668 tests Friday, with fewer than 1 percent coming back positive for the eighth consecutive day.

– President Donald Trump said he opposes both election aid for states and an emergency bailout for the U.S. Postal Service because he wants to limit how many Americans can vote by mail in November.

The president has sought to avoid responsibility for mounting a national response to the pandemic, leaving major decisions about containing the virus to state governors. At times, he has encouraged popular resistance to wearing face masks and following other guidelines recommended by health officials in his administration.

Trump has also erroneously blamed coronavirus testing for the United States’ high death toll and caseload. Surges of infections across the South and West this summer outpaced the expansion of tests in many places, and rising positivity rates and hospitalizations made clear that the spread of the virus was accelerating.

In his Friday interview, Romney said the administration did not “ring all the alarm bells” early on in the pandemic. He faulted officials for failing to put the federal government in charge of distributing personal protective equipment, manufacturing essential supplies and setting guidelines for businesses.

“From the outset, there was a tendency on the part of the administration to dismiss covid-19 as a threat, not to consider how serious it could become,” he said, referring to the disease caused by the novel coronavirus. “The health impact of covid-19 on our country and our response to it was really very, very disappointing.”

This was not the first time Romney has accused the administration of mismanaging the pandemic. In mid-May, he criticized the Trump administration’s early coronavirus testing rollout, saying the administration had “treaded water” during February and March and that its actions were “nothing to celebrate.”

Trump has defended the response, noting at a Thursday news conference that the administration had tapped manufacturers to increase production of masks, ventilators and other equipment.

Nationwide testing remains far below what health experts say is necessary to adequately track the virus and prevent new outbreaks.

Over the past two weeks, the seven-day average for tests administered daily in the United States has fallen sharply after increasing every month since the beginning of the pandemic. As of Friday, the country was administering an average of about 747,000 tests daily, down from a peak of about 823,000 in late July, according to data from the Covid Tracking Project.

The decline comes after coronavirus patients and health officials around the country have reported waiting a week or more for results – a delay that experts say effectively renders tests useless in controlling virus transmission.

Debate over the U.S. testing dilemma flared Friday when Ashish Jha, director of the global health institute at Harvard’s T.H. Chan School of Public Health, criticized Brett Giroir, the White House’s testing czar, over his handling of the crisis. Giroir said in a recent call with reporters that he did not recommend a “strategy of testing everyone on a frequent basis.”

“Admiral Giroir fundamentally misunderstands the purposes of testing, which is unfortunate, because he is our national testing czar, so you think he would have a better understanding,” Jha said in an interview with CNN.

He later said he thought Giroir was a “patriot” and “trying his best,” but reiterated that the country needed to perform millions of tests per day to get a handle on the pandemic.

Giroir responded that those numbers were unrealistic.

“There is no physical way to do 5 million tests per day in this country,” he told CNN. “If there is a way to turn it from 1 million to 5 million today, let me know.”

“Everything that can possibly be done has been done,” Giroir added.

As part of the federal government’s efforts to make testing faster and cheaper, the FDA granted emergency use authorization Saturday to a coronavirus test developed by Yale researchers. The technology is designed to reduce turnaround times in commercial laboratories.

The diagnostic test, which is called SalivaDirect, does not require a swab or a special collection device; a sample can be collected in any sterile container, the FDA said. Nor does it require a separate step to extract nucleic acids, a process that is time-consuming and relies on components that have often been in short supply.

Researchers at the Yale School of Public Health said the test is less expensive than traditional testing and offers comparable results. The school does not intend to commercialize the test, which does not rely on proprietary equipment. It can be assembled by labs across the country. The test is the fifth that the FDA has authorized that uses saliva as a sample.

Declines in testing make it harder to determine the extent of virus transmission and gauge the impact of public health measures, especially in hard-hit states.

In Arizona, reported infections and hospitalizations are down after skyrocketing in late June and early July, according to the state’s data. But testing has also slowed dramatically, dropping from daily highs of more than 23,000 last month to less than 12,000 for the past two weeks.

Bonnie LaFleur, a biostatistics research professor at the University of Arizona, said that while she has seen irregularities in some labs’ reporting of test results, the state was showing “a positive downward trend in general.”

Texas has also reported declines in both new daily cases and daily tests over the past few weeks, creating a clouded picture of the state’s success against the virus. Further complicating the situation, state health officials reported a batch of more than 124,000 test results Thursday that they said was backlogged because of a technical error, according to the Texas Tribune. Officials said they were working to figure out when the tests were conducted.

Similar problems have cropped up in California, where officials say a technical glitch created a backlog of as many as 300,000 records, causing an underreporting of cases since July 25.

Other states severely affected by the summer surge in cases continued to report falling infection numbers. Florida reported 6,352 new cases Saturday, the fewest the state has tallied on any Saturday since June 20, according to tracking by The Washington Post. Coronavirus-related deaths, however, continued to trend upward in Florida, which reported 204 fatalities Saturday.

Nationwide, the United States continues to report more than 1,000 coronavirus-related deaths every day. Health officials reported 56,754 new infections as of Saturday evening – roughly even with the 56,555 cases announced on the same day the week before. 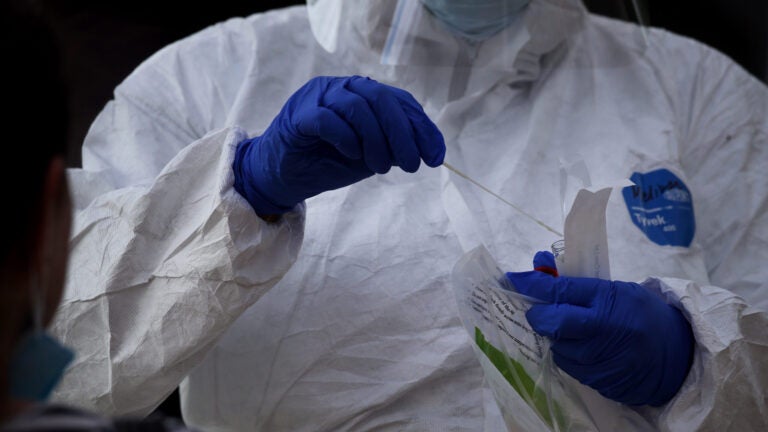