Which out-of-state travelers need to quarantine or provide evidence of a negative COVID-19 test upon visiting Massachusetts?

In a series of tweets, the Massachusetts Department Public Health said it is removing Delaware, Pennsylvania, and West Virginia from the list of exemptions from the travel rules, meaning that visitors from those states must once again self-quarantine for 14 days or provide proof of a negative COVID-19 test within the past 72 hours — or face a potential $500 fine.

DPH officials also announced that they are adding New Mexico to the list of lower-risk exempt states.

The adjustments — due to changes in coronavirus levels in the four respective states — take effect at 12:01 a.m. Saturday. 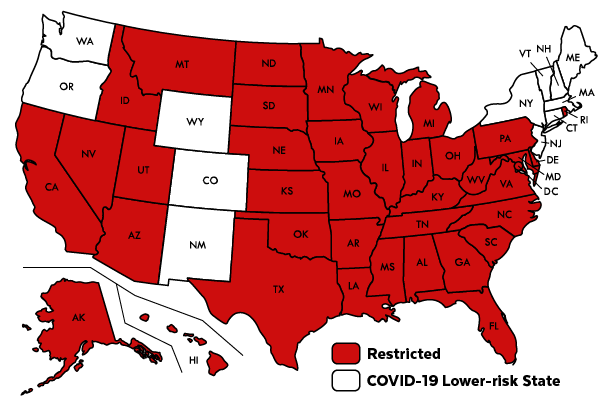 New Mexico was added to the list of lower-risk states, while Delaware, Pennsylvania and West Virginia removed, effective Saturday.

Massachusetts requires states to meet two criteria to be exempt from the rules. First, their average number of daily cases per 100,000 residents must be below six and, second, their positive test rate must be below 5 percent.

Delaware, Pennsylvania, and West Virginia, as well as Colorado, were added to the list of exemption last month due to decreases in their prevalence and positivity rates (officials also added Oregon, Washington, and Wyoming last week).

Despite its 1.1 percent positive test rate, Rhode Island — which was removed from the list in early August — remains the sole New England state not exempt from quarantine rules, though there are some exceptions for essential cross-border trips like work, grocery shopping, and medical care. As of Friday, Rhodey’s 8.4 cases per 100,000 remained above the acceptable six-per-100,000 maximum.

Wyoming, which as of Friday is averaging 6.4 cases per 100,000 cases, has waffled on the cusp of threshold. However, state officials reevaluate the list on a once-a-week basis, typically on Wednesday, to make potential changes. And on Wednesday, Wyoming’s case prevalence and positivity levels were both below the limits (so book that trip to Yellowstone while you can).

More seriously, the increasingly changing nature of the list — especially compared to more stagnant quarantine rules like in Maine — does raise potential questions. For example, any Pennsylvania residents who were planning a trip to Massachusetts this weekend would now ostensibly have to scramble for a last-minute COVID-19 test, quarantine upon arrival, or cancel their plans (or, perhaps more likely, ignore the rules).

Asked if Massachusetts was coordinating with states on the edge, Gov. Charlie Baker said Wednesday that “there’s conversations going on between the states that are close and us on a pretty regular basis.”

Visitors, as well as returning Massachusetts residents, from the 39 states not on the lower-risk list are also supposed to complete an online form attesting to the rules, unless they qualify for one of several exemptions.

State officials note that the MBTA, MassDOT, and other organizations have used public service announcements and message boards to remind travelers of the rules and to check the state’s webpage on the travel order for updates. When the quarantine order was changed from an advisory in July, the administration noted that “list of lower risk states is subject to change based on public health data, and states may be added or taken off the list at any time.” 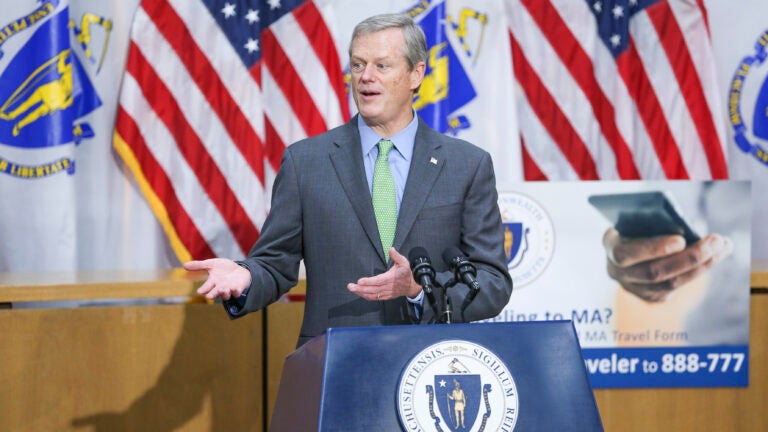