Following an uptick in coronavirus cases last week, Boston College will now have its contact tracing handled by state officials as concerns grow about the institution’s ability to sufficiently test for and contain the contagious virus.

The team of tracers takes over the reins this week, setting out to pin down the transmission chains amid students, faculty, and other employees of the college, Tory Mazzola, a spokesman for the state’s COVID-19 Command Center told The Boston Globe Tuesday.

Gov. Charlie Baker said the move was made because the college is surrounded by three communities — Newton, Boston, and Brookline — and the state can “more effectively” handle tracing for cases involving multiple municipalities.

So far, 115 people in the Boston College community tested positive for coronavirus between Aug. 16 and Sept. 14, all but two of them are undergraduate students, with 26,221 tests performed during that time.

During the first week of the fall semester — Aug. 31 through Sept. 6 — the college reported 26 positive cases. That number more than doubled for the round of tests conducted last week, when results showed an additional 73 people contracted the virus between Sept. 7 and 13.

Among them were at least 13 members of the school’s swim and dive team. Some of the student-athletes became sick on Sept. 7.

As of Saturday, 30 of the school’s 750 varsity athletes had tested positive, Jack Dunn, a spokesperson for the college, told the Globe.

Students who are determined to have been in close contact with people who tested positive are also tested and undergo quarantine for two weeks. Should they test positive, they are moved to isolated university housing, according to the news outlet.

“This strategy has led to an increase in positive cases this week, but will allow us to limit the spread of COVID-19 on campus,” Dunn said Thursday.

Still, students and staff have remained skeptical over whether the school is capable of controlling the virus’ spread amid the boost in cases.

Boston College does not test students as frequently as other nearby universities and colleges, and walk-in testing is not available, according to GBH. Of 7,200 students on campus, the college offers 1,500 surveillance tests per week.

Some say the school needs to be more direct with students about how it’s handling the virus.

Sophomore Delaney Coyne told GBH she lives in a dormitory, where there are more than 25 other students living on her floor. Three of them tested positive recently, she said.

“I’m sharing a bathroom with them, and the school has told me nothing,” Coyne said. “They haven’t even reached out to see if I should get another test.”

Here’s what we know about the COVID-19 situation at Boston College:

After cases climbed last week, Vice President for Student Affairs Joy Moore wrote to students by email Friday afternoon, urging them to follow the Eagles Care Pledge, which mandates students abide by the college’s expectations aimed at helping limit the spread of coronavirus, The Heights, the college’s student newspaper, reports.

Moore also reiterated the school’s “no party” policy, for both on and off-campus gatherings, and wrote that violators can face suspension and lose on-campus housing, according to the publication.

Still, The Heights reports that “large groups of students gathered outside freshman residence halls on Upper Campus and Newton Campus just hours after the email was sent, many of whom were not social distancing or wearing masks.”

No school staffers were observed at the scene to enforce university policies, according to the newspaper, which added that “dozens of students gathered adjacent to residence halls, many not wearing masks while standing in close proximity.”

School officials have said student gatherings have largely driven the recent uptick in cases, including those among student-athletes.

Dunn told the Globe, however, the school saw “a quiet weekend with no incidents” because of “raised concerns among students” brought on by the case count spike.

“Students are following the rules, with the exception of a few gatherings earlier in the semester in which students did not wear masks or practice physical distancing,” Dunn said in an email to the newspaper.

Dunn said the school has suspended dozens of students for violating social gathering rules and others have lost on-campus housing since the semester began.

“Students have been disciplined for violation of our conduct and we will continue to hold them accountable,” Dunn wrote. “We have every confidence that they will rise to the occasion, as BC students always do.”

Students want the school to take further steps. The college has defended its approach to handling the virus.

A freshman from Lynn, Tommy Merida had a cough, sore throat, congestion, a headache, and a runny nose last Tuesday when he reported his symptoms into a health screening website — as he and all students are required to do every day, according to the Globe.

The website informed him he needed to be tested, but even after calling University Health Services three times, he did not receive an answer. He ultimately got tested, but his roommate also became sick as Merida waited for his test. Both students tested negative, the Globe reports.

Merida told the newspaper he’s worried students who are sick will face the same challenge.

“The whole dorm could have COVID and we wouldn’t even know it,” he said.

Similarly, Francesca Lynch developed some nausea, a headache, a mild sore throat, and fatigue Monday but was turned away twice before she was able to be tested, the Globe reports.

“The way that they are handling the whole thing is absolutely ridiculous,” said Lynch, now living in isolation as she waits for her test results.

“The current administration has placed blame on the student body- even with extremely inadequate testing and policies,” the petition, which garnered over 543 signatures as of Wednesday evening, says. “Boston College should either place all students in a mandatory 2-week quarantine to stop this current spread and ensure that the semester does not end abruptly OR suspend all in-person classes for at least 2 weeks.”

College administrators have maintained that most of the cases that accounted for the recent uptick were because of off-campus gatherings where students didn’t follow virus precautions. Officials were able to quickly identify those who attended each one, they told the Globe.

Administrators also noted that the college’s positive cases dropped from a daily high of 22 on Sept. 8 to a mere five cases on Tuesday.

According to Dunn, the college performs 1,500 tests a week — which increased to 3,000 tests last week — on randomly-selected students. Students who are symptomatic are told to call health services and are given a same-day testing appointment, he said.

In an email last week, administrators told the college community the school remains focused on “targeted surveillance” and testing of students known to have come in contact with infected people. Testing volume can increase on an as-needed basis.

“We have adopted more aggressive targeted surveillance testing due to positive cases, and we will continue to make adjustments as necessary throughout the semester in an effort to keep the campus community healthy and safe,” the e-mail said.

Dunn also told the Globe groups of students in the dining hall are spaced six feet apart and that dormitories are emptier than usual because of students who have decided not to return to campus for the semester and because of travel restrictions.

Still, some students say the college must be more transparent in how its handling cases.

Andrew Wilson, a senior student and captain of the water polo team, told GBH that student athletes and life guards who use the same facilities of the swimming and diving team were not notified of the team’s virus outbreak.

“The news came from The Boston Globe, it didn’t come from any of the institutional staff at our own school,” Wilson said in an interview with GBH. “As captain, I’m responsible for other members of my team, and the fact that I was not aware of this, that nobody else was aware of this, is really frustrating.”

Local officials have concerns about the virus at B.C.

On Saturday, Newton Mayor Ruthanne Fuller told the Globe she is “gravely concerned about the transmission of COVID-19 at Boston College,” adding that the school needs “swift, decisive, and effective action right now.”

Fuller, who penned a public letter to the school, has also told the college not to open more quarantine and isolation facilities off campus and to reduce the number of students on campus. Newton officials met with college administrators Saturday via a Zoom call.

“We see what’s happening on the Boston College campus, and it’s impacting the health of our residents and the health of our city and our ability to do such important things such as reopen our public schools,” Fuller told GBH Monday. “We’re also trying to get our residents back to work and our restaurants and retailers and other businesses back on their feet, and that all interacts with having a very quiet amount of COVID-19. It’s anything but quiet on the Boston College campus right now.”

Dunn told the newspaper the school is not isolating students in Newton. The college has no plans to reduce the number of students on its campus, he said.

“I’m trying to hold their feet to the fire and insist that they need to take this situation very seriously,” Breadon told the newspaper. “The universities don’t live in a bubble.”

“I certainly remain concerned about the situation at Boston College … or any outbreak honestly in the City of Boston,” Walsh said during a press conference on COVID-19 updates Tuesday. “We are working with Boston College and the City of Newton, and the state to make sure we address in a swift, thorough way so both students and the surrounding communities are kept safe.”

“It’s been an all-hands-on-deck effort,” he said. 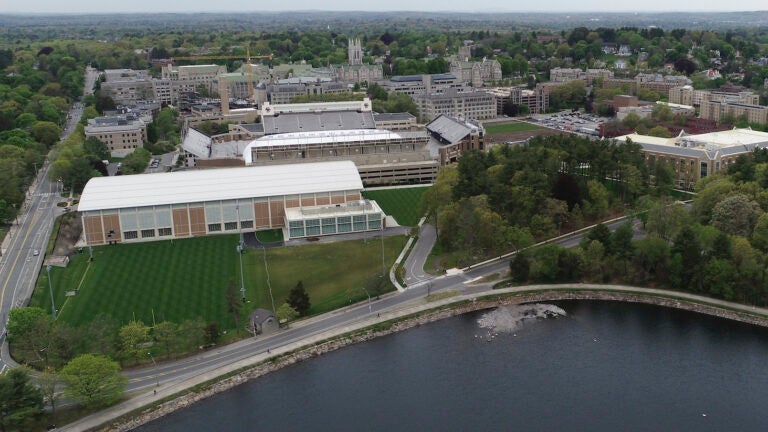 13 members of Boston College’s swim and dive team have tested positive for coronavirus. Here’s what you should know.