The average positive test rate for COVID-19 in Massachusetts has been garnering attention in recent weeks — for a good reason.

The state’s average positive test rate for coronavirus has remained under 1 percent since the start of September, prompting some to question whether the state should be moving forward through its next reopening phases. But when asked about the dipping positive test average in late August, Gov. Charlie Baker said the state would hold steady for the time being, to closely monitor the reopening of schools and colleges in Massachusetts.

He reiterated that message again last week when asked about the steadily low positive test rate, according to NBC10 Boston.

“These are both really big and really important,” Baker said of keeping the focus on schools, rather than moving forward with the next phase of business reopenings. “For the next couple of weeks our focus is going to be there. We’ll talk about other stuff when we get past that.”

In an interview with Boston.com, Shira Doron, an infectious disease physician and the hospital epidemiologist at Tufts Medical Center, explained the significance of positive test rate in monitoring the COVID-19 pandemic in Massachusetts.

She said it’s important that no one test measure or metric is the deciding factor in the state’s reopening, because each element is “limited” in the information and insight it provides about the outbreak.

The percent positivity rate is a key metric for understanding the meaning of the number of confirmed cases in relation to the number of tests being performed, she said.

“We look at the number of cases per day, just the sheer number, and if those are going up, we worry,” she said. “But if those are going up as a result of more testing, then it might not actually be representative of more infections. So then we look at the percent positivity. If your percent positivity is low, that could be because your number of infections is just down. But it also means that you’re testing enough to not be missing a lot of cases.”

In other words, if the average positive test rate was 90 percent in your community, but you had a low count of confirmed COVID-19 cases, that would indicate a lot of infections were not being caught, the doctor said.

“You should be doing a lot of tests that come out negative if you are successfully seeking out and finding all of the people who are positive,” Doron said.

So while the state has continued to report hundreds of new cases most week days in recent weeks, Massachusetts has also ramped up its testing, she pointed out.

As of Wednesday, 9,036 people in Massachusetts have died from COVID-19 and the state has seen 123,720 cases cumulatively since the start of the pandemic. In the latest daily dashboard, the state reported 295 new positive cases and 20 new deaths.

Other metrics on the state’s COVID-19 dashboard, including the number of cases per capita, help measure how much the disease is circulating in the community, the doctor said. But what’s arguably the most important metric for tracking the pandemic in the state is measuring whether there are enough healthcare resources to handle the current cases, she said.

“That’s why we began this ‘flatten the curve’ initiative in the first place, with stay-at-home and business closings — that was all about hospitals,” Doron said. “So that’s obviously a key piece of the dashboard. The dashboard has percent positivity and then the next two things are about hospital capacity, the three-day average of COVID patients in the hospital, and then the number of hospitals using surge capacity. And then of course, ultimately, deaths are obviously critical.”

Overall, Doron said her feeling is that the data being put out by Massachusetts is “very good,” adding that she believes state and public health officials have been “very, very transparent” in providing the dashboard and raw metrics online.

“We’ve done an amazing job as a state,” she said. “It’s clear that the people of Massachusetts understand what it is we’re doing here and why we need to do it and are doing it. And it also shows, with reopening, that even after a massive surge, it can be done. Even while not on a stay-at-home order, it can be maintained.”

If anyone feels overwhelmed looking at the data dashboard when trying to understand the COVID-19 risk in their community, Doron recommends checking the “heat map” released weekly by the state that breaks down the risk for coronavirus for each municipality in the state, illustrated through color-coding. That map, she said, takes into account a variety of the data metrics simultaneously.

“You wouldn’t be liable to get confused or misled just because of a massive increase in testing driving down a percentage, or just because of something else,” she said. “So it will take into account all those factors.”

And even if you’re in a “Massachusetts hotspot,” Doron said to be reassured that the state is still in a “much better place than many parts of the country.”

But just because Massachusetts is doing relatively well in containing the virus, the doctor still warned against people getting “pandemic fatigue.”

Social distancing, wearing face coverings, and good hand hygiene have to continue, even as reopening continues.

“We’re not going to be giving up masking and distancing probably even if we have a vaccine,” she said. “This is probably the way we do things for a very long time. But when we do that, we can do most things. People still agonize, ‘Should I get my hair done and should I eat at a restaurant outdoors?’ There’s a reason it’s allowed. It’s allowed because it hasn’t been associated yet with any major setbacks. So everybody still has to [assess] their own level of risk taking, but it’s all doable with the appropriate precautions.” 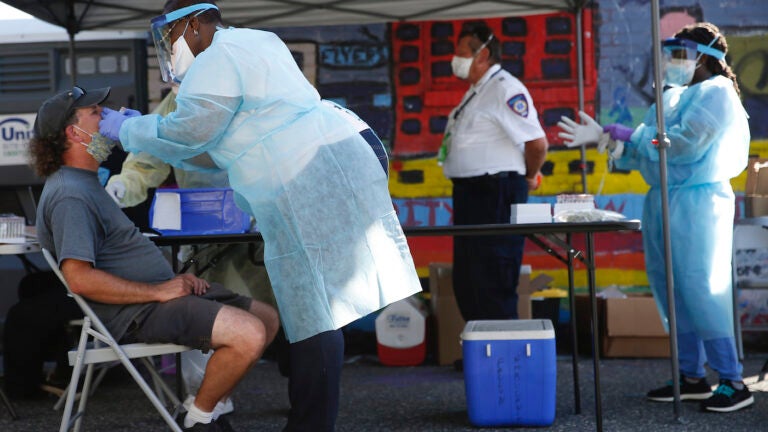 A COVID-19 hot spot in Framingham is being driven by gatherings, officials say. Now the city is cracking down.