The Cambridge-based biotech company Moderna released a 135-page document Thursday that spells out the details of how it is conducting the late-stage trial of its coronavirus vaccine, and how safety and efficacy will be determined.

Would you get a coronavirus vaccine? Scroll down or click here to take our poll.

The document suggests that the first analysis of the trial data may not be conducted until late December, and that there may not be enough information then to determine whether the vaccine works. Subsequent analyses, scheduled for March and May, are more likely to provide an answer.

Those timelines mesh with the cautionary estimates from many researchers, and stand in sharp contrast to President Donald Trump’s predictions that a vaccine will become widely available before the end of this year.

Scientists have been calling on vaccine-makers to share their study plans, known as protocols, so that outside experts can evaluate them. Until now, none of the nine companies that are testing vaccines in late-stage clinical trials had done so.

Moderna, AstraZeneca and Pfizer, which is collaborating with the German company BioNTech, are among the front-runners in the global race to produce a vaccine to fight the pandemic.

AstraZeneca’s trial stopped temporarily because of serious illness in a participant. It has resumed in Britain, but not in the United States.

Pfizer said Saturday that it planned to expand its trial to 44,000 participants from 30,000, but that it still expected to have efficacy results by the end of October.

Both Moderna and Pfizer/BioNTech use genetic material from the virus, known as mRNA, to prompt cells in the body to make a fragment of the virus that will train the immune system to fight off an infection.

Dr. Tal Zaks, Moderna’s chief medical officer, said that his firm was the first of the coronavirus vaccine-makers to release its protocol, and that pharmaceutical companies were usually reluctant to do so, for competitive reasons.

“I’m proud of doing that,” he said in an interview. “I don’t think there’s much there that we’re disclosing that hasn’t already been spoken to, but let the public be the judge of that.”

Cognizant of public wariness and skepticism about vaccines, Zaks said Moderna consulted an outside ethics expert who advised the company that the only way to win trust was to be “transparent to the point of discomfort.”

He also sought to address researchers’ complaints about the lack of disclosure.

“If what you want to do is see the protocol — here,” Zaks said.

The action might encourage other vaccine-makers to do the same, Dr. Stéphane Bancel, Moderna’s chief executive, said in an interview.

Dr. Eric Topol, a clinical trial expert at Scripps Research in San Diego, gave the company “big kudos” for sharing the information, but said that he was disappointed by some of the details. For example, the company intends to include in its data people who developed relatively mild cases of COVID-19. Topol said more compelling evidence of the vaccine’s effectiveness would be produced if the company counted only moderate to severe cases.

In addition, the protocol allows for the possibility of stopping the trial early after a relatively small number of cases. Stopping early could lead to an exaggerated perception of the vaccine’s efficacy, and could also miss safety problems that could turn out to be significant later if the vaccine is given to millions and millions of people.

“Take the time, the extra weeks,” Topol said. “No shortcuts. Nobody will regret it. I’ve been doing clinical trials for decades. I don’t know if there’s ever been a more important one than this one. I’d like to see it done right and not stopped early.”

Moderna’s protocol release coincided with a call Thursday morning with investors to discuss the company’s coronavirus work, research on other vaccines and its plans to begin developing flu vaccines.

The company’s coronavirus vaccine, developed in collaboration with scientists from the National Institutes of Health, was the first to be tested in humans. The Phase 3 study now underway has enrolled more than 25,000 of its intended 30,000 volunteers, and Zaks said the enrollment should be complete in the next few weeks.

About 28% of the participants are Black, Latino or from other populations that have been particularly hard hit by the disease. A diverse enrollment has been considered essential to make sure that the findings apply to people from as many backgrounds as possible.

Half the participants receive the vaccine, and half a placebo shot consisting of salt water, with neither the volunteers nor the doctors treating them knowing who gets which. Two shots are needed, four weeks apart. Then the participants are monitored to see if they develop symptoms of COVID-19 and test positive for the virus.

Side effects of the vaccine are also tracked, with participants recording symptoms in electronic diaries, taking their own temperatures, making clinic visits and receiving periodic phone calls to assess their condition. In earlier studies the vaccine has caused transient reactions like a sore arm, fever, chills, muscle and joint pain, fatigue and headaches.

To determine the vaccine’s efficacy, COVID-19 cases are counted only if they occur two weeks after the second shot. Some patients are already two weeks beyond the second shot, but Zaks said he did not know if any trial participants had contracted the disease yet.

A total of 151 cases — spread between the vaccine and placebo groups — would be enough to determine whether the vaccine is 60% effective. The Food and Drug Administration has set the bar at 50%.

But if the vaccine turns out to be highly effective, with a statistically significant difference emerging between the two groups with fewer than 151 cases, efficacy could be proved sooner, Zaks said.

The numbers will be watched by a panel of independent experts picked by the National Institutes of Health. The same group will also monitor several other trials.

The panel, called a data-safety monitoring board, will perform its first analysis of the efficacy data once 53 cases have occurred.

Bancel said the company would report publicly on the results of this so-called interim analysis, and the next one, when they are conducted.

The safety board can also put the trial on hold if there is evidence that a participant may have been harmed, as occurred recently in AstraZeneca’s vaccine study.

If the data are not conclusive, the panel will look again after there have been a total of 106 cases. If there is still no answer, the next and final analysis will occur after 151 people contract COVID.

How long it takes to reach any of those case counts depends on the trajectory of the pandemic and how likely participants are to be exposed to the virus.

It will probably take five months from the study start — when the first participant received the first shot — to reach 53 cases, eight months to reach 106 and 10 months to reach 151, the protocol states. Those estimates depend on certain assumptions being correct, including that in a six-month period, the incidence of COVID in the placebo group will be 0.75%.

The study began in late July, which would suggest that the first interim analysis may not occur until late December, and the final one in late May.

Regardless of whether the vaccine is effective or not, the participants’ health will be monitored for two years after the second shot, the protocol states.

Moderna and other companies have already begun making their vaccines “at risk,” meaning financial risk, because if the trials find that the products do not work, they will have to be thrown away. Both Moderna and Pfizer have projected that millions of doses will be ready early in 2021. But the world population is 7 billion, and everyone will need two doses.

“In the first half of next year, at least maybe until Labor Day next year, I anticipate that the world is going to be massively supply-constrained, meaning not enough vaccine to vaccinate everybody,” Bancel said.

His timetable seemed in line with one suggested Wednesday by Dr. Robert Redfield, director of the Centers for Disease Control and Prevention, who told a Senate committee that a vaccine would not be widely available until the middle of next year. Just hours later, the president publicly contradicted Redfield, saying he was mistaken.

Would you get a coronavirus vaccine? Take our poll below. 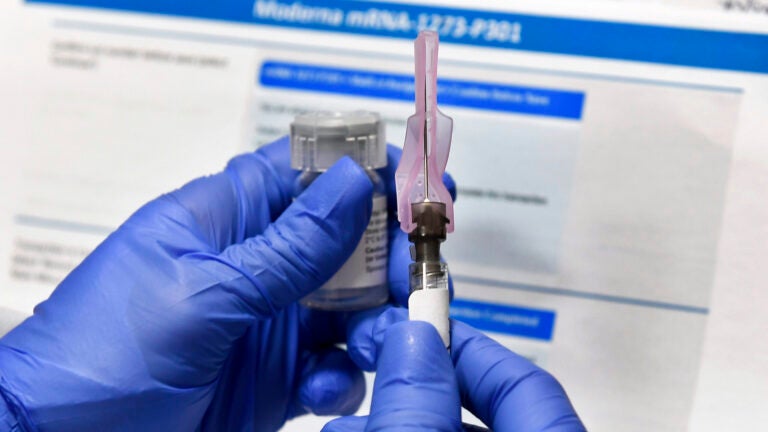 The CDC is preparing for 2 COVID-19 vaccines. Here’s what you need to know.