President Donald Trump’s announcement on Friday that he had tested positive for the coronavirus has raised many questions about what the infection could mean for the health of America’s top leader.

In a statement, the president’s physician said Trump, who is 74, was “well” but did not say whether he was experiencing symptoms. He said the president would stay isolated in the White House for now.

Here is what we know about how the virus could affect people with his general profile.

Older men are at greater risk of becoming seriously sick.

Older men are up to twice as likely to die from COVID-19, the disease caused by the coronavirus, as women of the same age are, according to an analysis by the Chinese Center for Disease Control and Prevention. Another study, published in Nature in August, found that this was because men produce a weaker immune response than do women.

The potential for needing hospitalization rises after the age of 50, said Raina MacIntyre, who heads the biosecurity program at the Kirby Institute of the University of New South Wales in Sydney, Australia.

Obesity poses another risk factor for dying — particularly among men, according to an analysis of thousands of patients treated at a Southern California health system.

“If you don’t know anything about Donald Trump, just knowing that he’s a male, over 70, and appears to be overweight, right away, you can say he’s in the high-risk group,” said Michael Baker, a professor with the department of global health at the University of Otago in Wellington who is an adviser to the New Zealand government.

Still, many people his age have recovered from COVID-19.

Even though the risk of severe illness from COVID-19 increases with age, most people who contract it get well quickly with minimal symptoms.

“The good news is that even people who have a number of risk factors, on average, do well,” Baker said. “Only a minority have illness and severe consequences.”

“A lot of people his age who get COVID are actually fine,” said Benjamin Cowling, head of the division of epidemiology and biostatistics at the University of Hong Kong.

The outcome could be complicated if Trump has certain underlying health conditions, which researchers widely agree pose a risk of serious illness.

Trump, White House officials and his doctor have maintained in recent months that the president was in good health. But Trump loves cheeseburgers and does not exercise much, aside from playing golf. In June, Trump’s doctor said the president weighed 244 pounds, which makes him obese.

“If he doesn’t have diabetes, high blood pressure or any long-term illness, then the outcome probably won’t be severe,” said David Hui, the director of the Stanley Ho Center for Emerging Infectious Diseases at the Chinese University of Hong Kong.

It’s hard to say how long it would take for Trump to recover.

Experts agree that the next week will be critical in determining the course of Trump’s illness.

If Trump does not develop symptoms, antibodies will appear 10 days after the onset of illness and he will recover, according to Hui at the Chinese University of Hong Kong.

Dr. Anthony Fauci, director of the National Institute of Allergy and Infectious Diseases, has said that “the good news about COVID-19” is that about 40% of those who get infected never develop symptoms.

Current estimates suggest that symptoms, if they appear, could do so as soon as two days or as long as 14 days after exposure to the virus.

If Trump develops mild symptoms such as a cough, fever or shortness of breath, it could take him a week to recover. A severe illness, which could mean developing lung lesions and pneumonia, could require hospitalization, possible ventilation and months of treatment.

“You couldn’t put a specific time on it,” said Dominic Dwyer, a medical virologist at the University of Sydney. “Irrespective of what one thinks about politics, you wouldn’t wish this on anyone.”

Treatment will depend on the severity of his illness.

Experts agree that Trump’s treatment regimen will depend on whether he develops symptoms in the coming days.

As long as he has no symptoms, or limited symptoms, maintaining a comfortable environment in which he can be isolated for 14 days and be regularly assessed by doctors would suffice.

There is, of course, no cure yet for COVID-19. But if Trump develops pneumonia and respiratory failure and other signs of a more serious condition, a number of treatments that have been used widely by doctors and nurses would be available to him.

Remdesivir, an antiviral drug designed to treat both hepatitis and a common respiratory virus, has shown to be useful for treating severely ill patients. A steroid called dexamethasone has also reduced mortality in such patients, according to scientists at the University of Oxford. 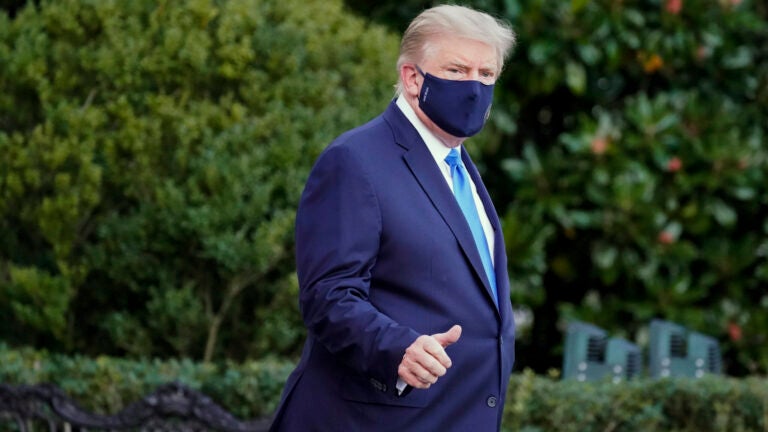