Gov. Charlie Baker often stresses that the state’s response to the COVID-19 pandemic would follow the public health data.

However, the Massachusetts governor’s “no exemptions” public face-covering mandate — part of a slate of new orders that take effect Friday to address the recent increase in infections and hospitalization — is receiving criticism from some public health experts who say the new rule departs from that science-based approach.

“Masks are an important prevention tool when we’re close to other people, especially indoors, but there’s really no reason to be wearing a mask when you’re outdoors and you’re not close to anyone, “Julia Marcus, an infectious disease epidemiologist at Harvard Medical School, said in an interview Thursday.

Baker’s new order requires individuals to wear face coverings at virtually all times in indoor or outdoor public places, eliminating the previous mask mandate’s exception for when people can maintain six feet of distances from other (though it does not apply to people who are under the age of 5 or have medical conditions that make mask-wearing dangerous). Violators may face a fine of $300.

According to Baker, the updated order sends a simple message: “When you go out, wear a mask.”

As general guidance, epidemiologists agree; study after study has shown that masks prevent people — perhaps most importantly asymptomatic people — from spreading the coronavirus to others, particularly indoors where the vast majority of transmission occurs.

However, given the extremely limited evidence of outdoor transmission, Marcus says Baker’s previous order requiring individuals to wear masks in indoor public settings, as well outside when they can’t say at least six feet from others, should have been “perfectly adequate.” As an HIV prevention researcher who has written about the dangers of an “all or nothing” approach to risk during the pandemic, Marcus called the new order “a bit arbitrary.”

“And arbitrary public health rules are a way to break the public’s trust, which is essential to keeping people engaged in public health efforts,” she said. “I think a mandate like this — that people know is arbitrary — is going to do more to reduce trust than it will to reduce infections.”

Marcus also noted that the order means people who don’t have private outdoor space will no longer “be able to go outside and breathe fresh air without a mask on,” which will inequitably affect the socioeconomically disadvantaged.

In a tweet Monday, she called the governor’s order “pandemic theater” that distracts from where the actual risk of transmission lies; Baker himself has repeatedly blamed indoor gatherings where people aren’t wearing masks for driving the recent rise in cases. Other public health experts agree.

“I don’t think in and of itself, it will do anything, particularly,” Helen Jenkins, an assistant professor at Boston University School of Public Health, told The Boston Globe in response to the new order earlier this week.

“I think that we know outdoor transmission is very low, so if you’re more than six feet away from somebody, I don’t see a strong reason to make [people wear] a mask,” Jenkins said.

Asked about the “pandemic theater” criticism, Baker told reporters Tuesday that the order was “in some respects” about messaging. While he has praised the high rate of mask-wearing in Massachusetts in the past, Baker pointed to experts who have said national adherence to face-covering rules could bring the pandemic under control.

“I can’t express how important it is for all of us to execute on what I would call proper mask etiquette,” he said during a press conference at the State House.

Marcus doesn’t believe that reasoning backs up the new order.

Still, amid the increase in cases this fall, Maine announced Thursday afternoon that it was following suit with a similar order requiring “people to wear face coverings in public settings, regardless of the ability to maintain physical distance.”

Some Massachusetts cities like Cambridge and Somerville also imposed no-exceptions mask mandates last spring during the initial coronavirus wave. At the time, some public health experts said the measures could, at the very least, reduce the chance that individuals end up in high-risk areas without a mask, even if they didn’t make a difference when no one is around.

But at a time when officials — including Baker himself — are warning about pandemic fatigue, Marcus says the most sustainable approach is to only ask people to do what’s actually effective to prevent transmission and focus on mask rules for when people are in close proximity to each other.

“If people cannot sustain vigilance when it matters most, we will continue to see cases increasing,” she said. “I think policies need to be designed accordingly and to ask people to be vigilant when they’re literally not around another human being is not a way to help people conserve their energy for where it really matters.” 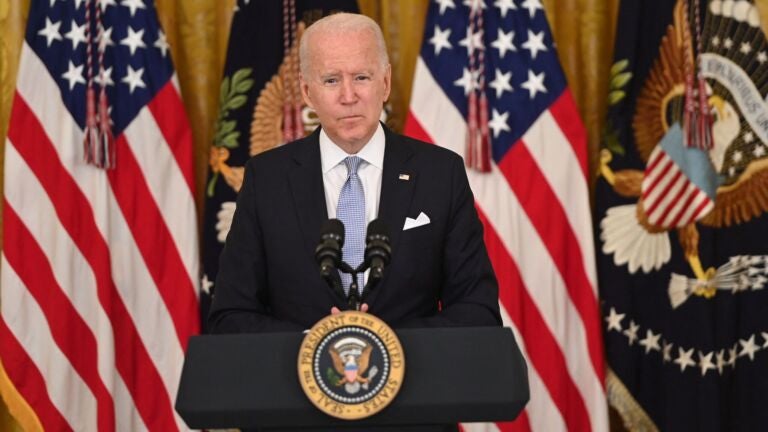