Jennifer Spicer thought her days of feeling the effects of COVID-19 were over. The fever, chills and severe fatigue that racked her body back in late July had long dissipated. And much to the excitement of the self-described “foodie,” her senses of smell and taste were slowly returning.

“I thought I had recovered,” said Spicer, 35, an infectious-disease physician at Emory University School of Medicine in Atlanta, who was exposed to the novel coronavirus while treating a patient. Although her senses hadn’t fully come back, she was eating and drinking “completely normally” again. “I felt a lot of relief,” she said.

But that relief lasted only until a Friday night in late October when she took a sip from a freshly poured glass of red wine.

“It tasted like gasoline,” Spicer said. She checked the bottle, found nothing wrong, then sampled the wine again.

“I was like, ‘Oh, this is not tolerable. This is not pleasurable at all,’ ” she said. “So I ended up dumping the entire glass of wine down the sink. It was that bad.”

The wine, though, probably wasn’t the problem. Her experience is keenly similar to those of some other COVID-19 survivors who are recovering their sense of smell. Known as parosmia, the often temporary distortion makes things smell different, and usually unpleasant, said Richard Doty, director of the University of Pennsylvania’s Smell and Taste Center.

“It’s more debilitating in some ways than loss of smell,” Doty said. He noted that certain distortions, including one that causes everything to have a fecal-like odor, can make common food and drinks revolting because flavor is tied to sense of smell. “Even water can become unpleasant,” he said.

For Spicer, the previously mouthwatering scents of cooked garlic and onions are now intolerable. Meat smells as if it’s rotting, and mint toothpaste is so off-putting she had to switch to a bubblegum-flavored one. And perhaps worst of all, coffee’s rich aroma has been replaced with the pungent odor of gasoline.

“Coffee is really the saddest thing for me because I really just enjoy having a cup of coffee in the morning,” Spicer said.

Similar accounts of parosmia and a related odor distortion called phantosmia, which causes people to smell scents that aren’t there, have flooded social media platforms in recent months. Facebook groups for those with COVID-related smell loss and distortions now have thousands of members. Some say they catch whiffs of cigarette smoke everywhere they go. Others can’t identify the fetid smell that consistently assaults their senses. Yanna Kasey, 25 of Atlanta, said the stench is particularly bad when she is around cleaning supplies.

“It feels weird because my brain is trying to make the connection of, ‘That’s supposed to smell like bleach,’ but it doesn’t smell like bleach,” said Kasey, who has yet to regain much of her sense of smell since she got sick in early July. “It’s something else, so it’s just so much discomfort.”

I’ve been dealing with the worst phantosmia the past few days. I smell nothing but cigarette smoke for the last 3 days and it’s driving me insane. Make sure you’re wearing your masks and washing your hands. Even being recovered from covid I’m still suffering.

The initial results of an international questionnaire published in June in Chemical Senses found that about 7% of the roughly 4,000 COVID-diagnosed respondents reported experiencing a smell distortion. Although experts don’t know what overall proportion of patients will be affected by parosmia, it is “probably a significant number,” said Justin Turner, medical director of Vanderbilt University Medical Center’s Smell and Taste Center.

The distortions are often observed in people who are recovering from COVID-19 and starting to get their sense of smell back, Turner said.

“In many ways, having a parosmia in the setting of COVID-19, or any other viral upper-respiratory infection that causes smell loss, is actually kind of a good thing because it suggests that you’re making new connections and that you’re getting a regeneration of that olfactory tissue and returning to normal,” he said.

Much remains unknown about the human sense of smell, but some experts have a theory about how smell loss linked to certain viruses, such as the novel coronavirus, can lead to parosmia, said Danielle Reed, associate director of the Monell Chemical Senses Center, a nonprofit research institute in Philadelphia.

“One speculation would be that as the olfactory receptor neurons recover, regrow and rewire into the brain that they don’t do it perfectly,” Reed said. Instead of being wired so that “a lemon smells like a lemon, . . . the neurons wander a bit and don’t connect properly. And so the brain is confused about how to interpret that information.”

Donald Leopold, a professor of otorhinolaryngology at the University of Vermont Larner College of Medicine, likened parosmia to playing a piano with missing keys.

“Normally, you have a smell, let’s say a rose, and a rose hits six keys,” or neurons, Leopold said. “If you have a cold caused by a virus or if you catch the coronavirus and it kills some of those neurons, let’s say you’ve only got three of those neurons left, that no longer allows you to smell a rose correctly. Just like if you hit those three keys, it wouldn’t sound like the same beautiful chord you played on the piano.”

Still, experts stressed that people experiencing parosmia should not panic. Though the process of regenerating olfactory cells is “highly variable,” Turner said, the phenomenon usually goes away as people regain their smell function.

Research into parosmia and the aftermath of COVID-19-related smell loss is in “extremely early stages,” Reed said, but she and other experts noted that there are ways to reduce the negative impacts of smell distortions and help the recovery process along.

“Smell training,” which has been recommended for people with smell loss, may be beneficial to those suffering from parosmia as it could theoretically help their brains make the correct connections again, Turner said. It usually involves smelling different odorants, such as essential oils, at least twice a day for 10 to 15 seconds at a time over the course of weeks. Common scents used for training include rose, lemon, clove and eucalyptus.

“It’s very easy to do, and there’s not really a whole lot of downside to it other than we know that it doesn’t work for everybody,” Turner said, adding that it can be done at home.

Other potential fixes are more temporary, for instance, finding ways to plug the nasal cavity.

Some people who are triggered by food and drinks and find it hard to stomach meals have solved the problem by putting a wet cotton ball in their noses, Leopold said. A similar effect can be created by taping the nostrils shut, Doty said.

“Although the flavor’s not there, you don’t have the disgusting flavor experience,” he said.

If those methods don’t work and eating and drinking many things is nausea-inducing, Whitney Linsenmeyer, a spokesperson for the Academy of Nutrition and Dietetics, said it is still possible for people to maintain healthy diets. She recommended switching to smoothies, which “can be a good way to still get a lot of nutrition packed in, but to make it a little bit more tolerable for people that are really not enjoying eating like they usually would.”

Linsenmeyer, an assistant professor of nutrition at Saint Louis University, also encouraged people to research alternative foods that may be more palatable. For people who are unable to eat meat anymore, she suggested turning to dairy and eggs or other protein-rich foods such as beans, lentils, nuts, seeds, whole grains and tofu.

Spicer, the infectious-disease physician suffering from parosmia, said she has tried to diversify her diet, instead of just eating “bland stuff,” and started taking a daily multivitamin. Recently, she learned she was able to tolerate a Thai curry dish.

“I was able to get something that had a lot of vegetables in it, and I don’t know if the vegetables were okay on their own, but covered in curry sauce, they were okay,” she said.

In the absence of concrete answers, Reed urged people with parosmia to seek out others who may be having similar experiences, such as joining online support groups.

“Some people, I think, benefit enormously from just being able to talk to somebody else who’s going through what they’re going through,” she said. “That’s not the same as a medical treatment, but I think some people get enormous peace of mind to just be able to unburden themselves with another person who can understand.” 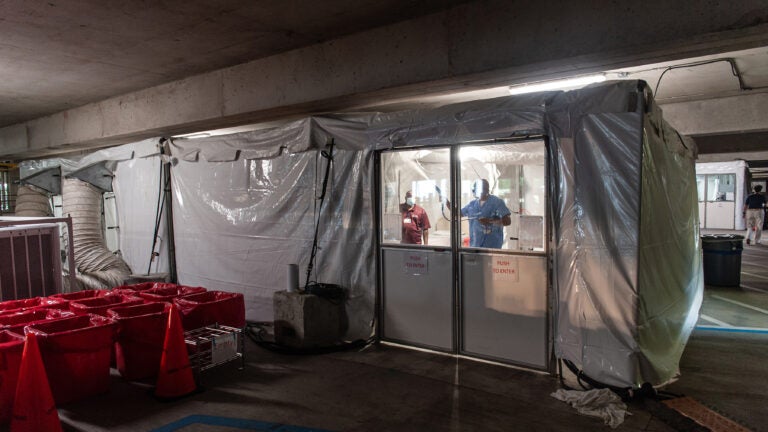 When will the delta surge end?