The second COVID-19 surge may be underway in Massachusetts, but Gov. Charlie Baker says that data shows students should be able to return to schools safely.

His administration is updating their community-level coronavirus risk metrics accordingly.

During a press conference Friday afternoon, state officials announced changes to the criteria for the stoplight-style COVID-19 risk map they use to advise local school districts on decisions to hold in-person classes, as well as permit communities to move forward in the reopening process.

The changes, which significantly reduce the number of communities with a high-risk red designation, come as Baker and his top education appointees continue to pressure all cities and town to reopen to prioritize in-person learning.

“Some people mistakenly believe that we can just wait this out and then send our kids back to school when there’s a vaccine or treatments,” the Republican governor said Friday. “But we all know that losing a week, a month, a quarter, or more in the life of a kid’s education has real consequences.”

Officials say the new criteria is more refined than the previous version, which gave communities a gray, green, yellow, or red designation based solely on their average number of new daily cases per 100,000 residents. That approach had been knocked for lacking nuance by officials in some smaller towns, where an isolated cluster could quickly bounce them into the red zone.

The new version still uses the number of cases per 100,000 residents as one of the measures, but differentiates communities by population. For towns with less than 10,000 residents, their designation is simply based on the number of cases. For larger communities, the updated metrics use 10 cases per 100,000 residents — an increase compared to the old incidence rate threshold — as a general benchmark, while also incorporating their respective positive COVID-19 test rates. 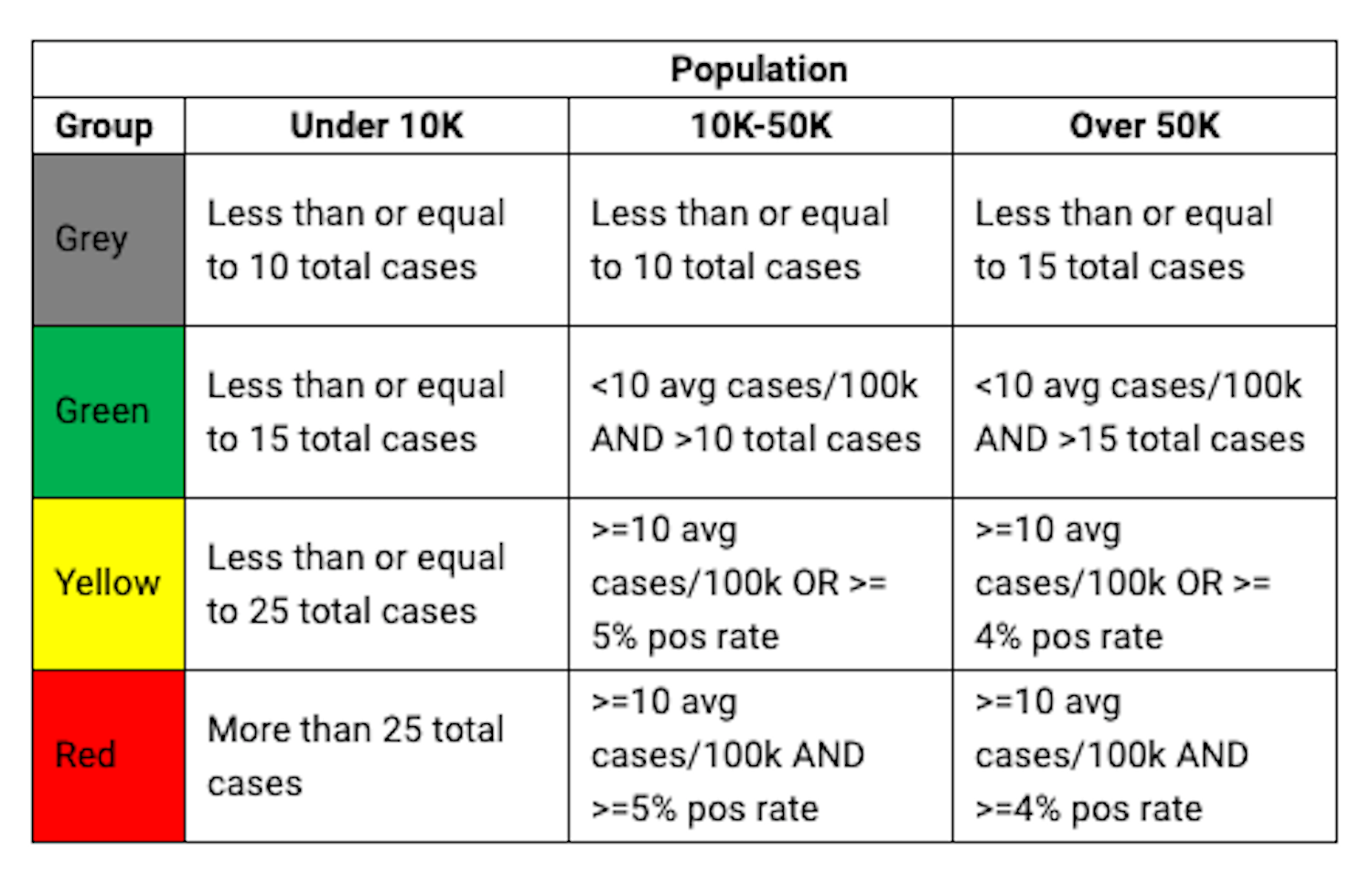 Updated metrics for schools and municipalities.

So what exactly do those changes mean? Simply put, a lot more communities in lower-risk categories.

Last week, 121 of the 351 communities in Massachusetts fell into the red zone, for which the Baker administration had initially recommended remote-learning, even as it pressed more lower-risk cities and towns to reopen schools.

“I happen to think this is a more nuanced and more accurate way to test how communities are doing,” said Baker, who rejected the notion that the state was simply loosening the rules in order to pressure more schools to resume in-person learning.

At the same time, the administration also issued new guidance Friday instructing schools to “prioritize in-person learning across all color-coded categories, unless there is suspected in-school transmission.”

Education Secretary Jim Peyser said that communities in the gray, green, or yellow categories are “expected” to have students learning “fully in person” and only use a hybrid model if there is “no other way” to logistically meet the state’s distancing or transportation safety standards. School districts in red zones should consider a hybrid model that prioritizes younger and high-need students, instead of going fully remote, Peyser said.

Officials pointed to multiple studies indicating that schools are not significant sources of COVID-19 spread. During the press conference, Baker said that more than 450,000 public school students across Massachusetts had returned to class this fall. According to a weekly report released Thursday, there were 252 new confirmed COVID-19 cases among students and staff.

“We continue to see too many communities with children learning in remote-only models,” Baker said Friday, reiterating the concerns about the negative emotional, development, and equity effects of sustained remote learning.

Mary Beth Miotto, the vice president of the Massachusetts chapter of the American Academy of Pediatrics, said during the press conference that she heard from hospitals dealing with more hospitalizations due to youth suicide attempts than youth COVID-19 cases.

“They’re typical children bending — or breaking — under the stress of the pandemic, and specifically from being alone for long hours at the computer,” Miotto said. “Many children struggle academically, but schools aren’t just about learning. Schools are places to find trusted adults. Schools are where school nurses help manage chronic diseases like diabetes or asthma. Schools are places where children get extra healthy meals, when food is scarce at home. And schools are places where friendships and mentoring provide safe havens for growing youth to establish healthy identities and ride out tough new emotions with the support of caring experienced adults.”

Still, the press conference came just hours before Massachusetts reported more than 2,000 new COVID-19 cases Friday afternoon — the first time it has broken that threshold since the initial spring surge — and earned a swift rebuke from the state’s largest teachers’ union.

“The new metrics may encourage people to relax their guard when they should be more vigilant than ever,” said Najimy, adding that the administration should respect the decisions by local cities and towns, some of which — most notably Boston — have recently shifted to fully remote learning.

“If schools have not been a very big source of transmission so far, that is likely because most have opened gradually or under a hybrid model – and not fully in person – in order to maintain six feet of distancing,” she said. “It makes no sense to jettison those safety practices now and crowd large numbers of students and staff into enclosed spaces, often in buildings with poor ventilation.

With experts forecasting a challenging fall and winter, Najimy added that “now is not the time to be relaxing health and safety standards.”

Jeff Riley, the state’s commissioner of elementary and secondary education, said earlier Friday that officials wanted to be “respectful of teachers’ unions.”

“But we also want to base all our decisions on science and the best medical advice,” said Riley, who argued that the state’s distancing and face covering protocols for schools have made in-person learning a relatively safe environment.

During the press conference, Baker said that Rhode Island students learning remotely were found to have tested positive for COVID-19 at a higher rate than those attending classes (though it’s unclear if there is a causal link between learning models or whether the trend is simply correlated with higher COVID-19 rates in a particular community).

Additionally, Miotto said that contact tracing indicated that children weren’t bringing the virus home from school and that the source of most teacher infections were from outside the classroom.

“We cannot downplay the risk of infection, but youth who attend school and who are reminded gently to wear masks, socially distance, and wash their hands may actually be much safer from viral transmission in school than when unsupervised in the community,” Miotto said.

Health and Human Services Secretary Marylou Sudders said Friday that the new metrics are “generally in line” with New York, Connecticut, and New Jersey — and are in fact more conservative than the guidelines used by California, Illinois, and New Hampshire.

As the Boston Herald reported last month, the Baker administration had previously threatened to audit school districts that move to remote learning against the guidance and standards set by the state. During the press conference Friday, Baker said it was “up to folks at the local level to make a call,” while Riley refused to entertain hypotheticals about potential penalties for districts that go against the new guidance.

“If people start deviating it certainly will address that individually,” he said. 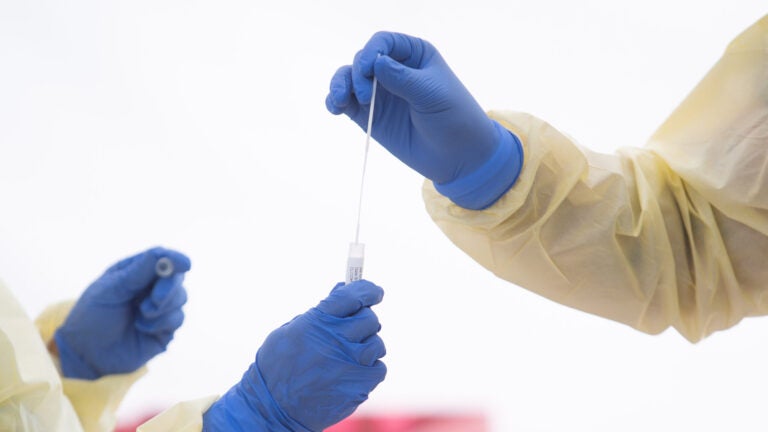