Local doctors are issuing dire warnings about the COVID-19 pandemic in the coming weeks and months in the United States, reminding the public and elected officials that actions have to be taken immediately to save lives.

“We are entering the hardest days of the pandemic,” Dr. Ashish Jha, dean of the Brown University School of Public Health wrote Monday. “The next two months will see a lot of infections and deaths.”

That must be remembered along with the emergence of “light at the end of the tunnel,” the doctor wrote. On Monday, Pfizer announced that early data on its COVID-19 vaccine suggests the shot may be 90 percent effective.

We all need to keep two seemingly contradictory facts in mind

1. We are entering the hardest days of the pandemic. The next two months will see a lot of infections and deaths

2. there is a light at the end of the tunnel. Today, that light got a bit brighter

Be safe. Mask up

In his victory speech to the American public on Saturday night, President-elect Joe Biden announced he was forming a team of scientists and experts to take his plan for tackling the pandemic and convert it into a “blueprint” for actions he can take when he is in office. He unveiled the members of the advisory board on Monday.

But local public health experts and epidemiologists are emphasizing that action is needed before Jan. 20, 2021, to save lives.

“The American people have decided they want a new approach to the pandemic, but we have 73 days until the new President takes office,” Jha wrote on Twitter on Sunday. “[Seventy-three] hard days. Without action, [an] additional 100,000 Americans will die by Inauguration Day. At least. So we can’t wait to act.”

Infections are rising fast in the United States, he noted. The percentage of tests coming back positive for the virus is also on the rise, which indicates many more infections are being “missed.”

“The key is that we are not likely to get much action from the Trump Administration, so we need to look for leadership elsewhere,” Jha said.

The average number of new daily confirmed cases in the country is now over 100,000, but Jha said it is likely that the number of new infections a day is actually somewhere between 300,000 and 400,000. The doctor said he expects by December the United States could be seeing 2,000 deaths a day, or more.

The situation is what experts have been warning about since April, according to Dr. Michael Mina, a physician and assistant professor of epidemiology at Harvard University.

“As bad as it’s been, the harsh truth is we are only now entering what is likely to be the toughest part,” he wrote on Twitter. “We had many opportunities to turn things around before the fall. We unfortunately squandered all of them. Now we still do have options but it will take real strategy and leadership. I just hope we can start tackling this virus with good policy today. No time like [the] present.”

Mina estimated the U.S. could see 200,000 new confirmed cases per day before Thanksgiving.

“We have a new President elect who is driven by science and reason and will act quickly,” the epidemiologist wrote. “But I worry about the harsh months leading up to and first few into it.”

Deaths are obviously following and we are now consistently above 1000 new deaths per day. EVERY DAY…!

We have a new President elect who is driven by science and reason and will act quickly. But i worry about the harsh months leading up to and first few into it.

Jha suggested there are five steps that should be taken immediately — pressing the Trump administration to “do more,” pushing Congress to fund testing for states, ramping up state testing, mask-wearing, and halting indoor gatherings.

“There is a lot we can do now,” he said. “All of us: Congress, governors, mayors, us as individuals.”

So we need to look for leadership elsewhere

But first, a little data on how we got here

Let’s talk about this moment.

And as you’d expect, increases in hospitalizations followed about 2 weeks later

We had about 28,000 people in the hospital in mid-September

Now we are at 50,000 people hospitalized pic.twitter.com/8PXxtBWFat

This is the acceleration phase. Infections are rising fast

But there is one more piece of bad news:

% of tests coming back positive has risen a lot

It was around 5% in early September, now it is closer to 9% pic.twitter.com/AFBBqZYGnd

Represents infections from a month ago

Today’s infections are 3X that

So can we avoid this?

4 Everyone just needs to wear a mask

Come on people. To save tens of thousands of lives? No brainer

To quote @GovRaimondo people need to knock it off

We all have to do more

If we do those 5 things: push for more federal action, get congress to provide $, governors to push testing, we wear masks and avoid indoor gatherings

We can keep schools open, save lives, prevent healthcare system from collapse

And that would make for a much better 2021 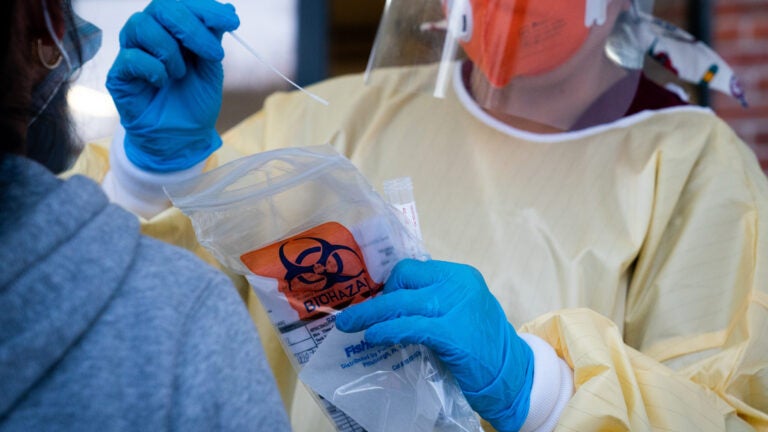 A ‘terrifying’ COVID surge will land in Biden’s lap