Gov. Charlie Baker’s office says he has “no plans” to make any additional changes to the rules and restrictions to limit the spread of COVID-19 in Massachusetts, amid concerns about the worsening wave of infections this fall.

According to reports by the Boston Herald and State House News Service, the Massachusetts governor missed an “emergency summit” with New York Gov. Andrew Cuomo and several other Northeast governors Sunday due to a scheduling conflict. Cuomo, who announced the summit Friday, said the intent of the virtual meeting was to “align policies as much as possible” — or at least make neighboring states more aware of their respective responses to the second wave.

Sarah Finlaw, a spokeswoman for Baker, told the State House News Service that members of the governor’s administration “regularly collaborate with other Northeast states regarding regional strategies to fight COVID-19.” After announcing several new executive orders two weeks ago in response to the increase in cases, Baker isn’t planning any additional measures in the near future, she said.

“The Administration is monitoring public health data and has recently put in place additional targeted measures to stop the spread of the virus including a stay at home advisory, early closures and a strengthened mask order, and at this time has no plans to make immediate changes to our current public health protocols,” Finlaw said in a statement.

Cuomo had said Friday that the summit would be with the governors of “six” northeastern states, but ultimately convened five, including himself, all of whom were Democrats: New Jersey Gov. Phil Murphy, Connecticut Gov. Ned Lamont, Pennsylvania Gov. Tom Wolf, and Delaware Gov. John Carney.

“We had a productive meeting today to discuss policies as we enter the next stage of the COVID crisis,” Cuomo tweeted Sunday night.

We had a productive meeting today to discuss policies as we enter the next stage of the COVID crisis.

The meeting comes after Cuomo — who recently followed Baker with a similar business curfew and reduced private indoor gatherings limit — hinted Friday that New York may further tighten restrictions in response to the second wave.

“We believe we’re going to have to be taking additional steps, and to the extent we can share information and align action, we’ll do that,” the New York governor said.

Massachusetts and New York were two of the hardest hit states during the initial coronavirus wave. And while the positive test rate and total number of hospitalizations in those two states have not reached their springtime numbers, they have both increased significantly in recent weeks as the country as a whole posts all-time record highs.

Over the weekend, Michigan and Washington issued new orders shutting down indoor dining and gyms in response to the second wave.

Baker, however, has argued that private gatherings — as opposed to businesses and other public settings where face covering and distancing standards are in place — is what has driven the increase in cases in Massachusetts.

This past Friday, a group of infectious disease experts said the governor’s recent actions appropriately “balance the public health benefits of keeping the population safe — and in school — with the need to maintain a strong economy to support all the residents of our state.”

“Now the job turns to you, the public, to keep your homes safe, your gatherings limited, and to ensure that those entering your home who aren’t household members remain masked and distanced at all times, especially through the holiday season,” the group wrote in an opinion piece in The Boston Globe. 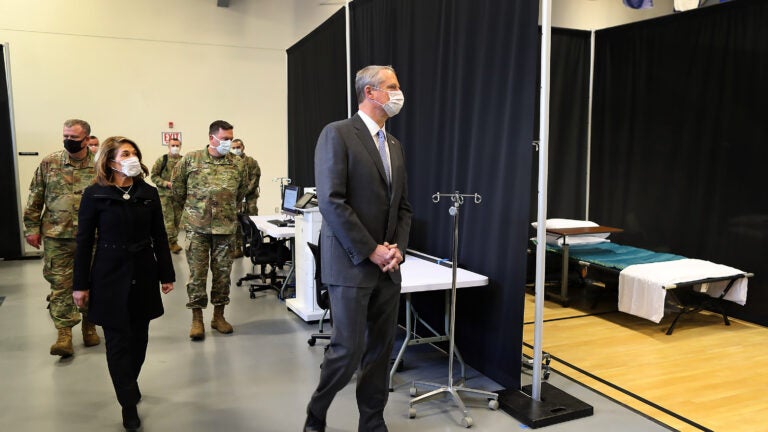