A couple were arrested and charged with reckless endangerment after they boarded a flight to Hawaii from San Francisco on Sunday, despite knowing that they had tested positive for the coronavirus, police said.

The couple, Wesley Moribe, 41, and Courtney Peterson, 46, of Wailua, Hawaii, were tested for the coronavirus in Seattle as part of Safe Travels Hawaii, a program that aims to limit the spread of the virus through testing and tracing.

During a stopover in San Francisco, they were told to isolate and not to fly home because their results had come back positive, police said.

The couple, however, ignored the instructions and boarded a United Airlines flight home, “placing the passengers of the flight in danger of death,” Kauai police said. The flight from San Francisco to Hawaii typically takes more than five hours.

The Centers for Disease Control and Prevention notified local authorities in Hawaii that the couple were on the flight, and they were arrested after the plane landed at Lihue Airport on Kauai, police said.

The officers who processed the couple were equipped with personal protective gear, including gloves, protective gowns, masks and face shields, police said. They noted that the couple’s booking photos were taken outside to lessen the risk of transmission.

The couple’s 4-year-old child, who was traveling with them on their way home from an international trip, was released into the care of a family member, and Child Protective Services was notified, police said.

Moribe and Peterson have posted bail, which was set at $1,000 each, police said. They are scheduled to appear in court Jan. 6, according to Justin Kollar, the Kauai County prosecuting attorney. If convicted, they could face up to a year in jail or a $2,000 fine, he said.

It was not immediately clear if the couple had a lawyer, and there was no answer Thursday at phone numbers listed under their names.

Kollar said the charges should send a simple message to the public.

“Now is not a good time to come to Kauai, period,” he said. “We don’t have the resources in our health care system to be able to absorb a widespread outbreak of COVID-19. And definitely don’t get on a plane and go anywhere if you’ve tested positive for the coronavirus. That’s pretty basic.”

United Airlines said it had banned the couple from its flights while it investigates.

“The health and safety of our employees and customers is our highest priority, which is why we have various policies and procedures in place as part of a multilayered approach to create a safer travel environment, including mandating that everyone on board wears a mask,” United said in a statement. “Prior to traveling, all United customers are required to complete a ‘Ready to Fly’ checklist acknowledging they have not been diagnosed with COVID-19 in the last 14 days.”

Todd Raybuck, chief of the Kauai Police Department, said that his officers, along with county and state authorities, “remain diligent in protecting the health and safety of our island.” 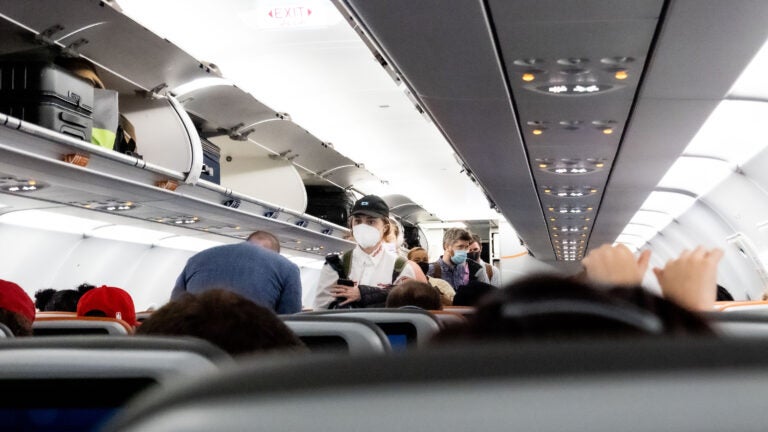 Cases of unruly airline passengers are soaring, and so are fines