Dr. Ashish Jha is calling on Gov. Charlie Baker to take immediate actions to slow the spread of COVID-19 in Massachusetts, saying he is “aghast” that steps to roll back the state’s reopening haven’t already been taken as cases have surged in recent weeks.

The dean of the Brown University School of Public Health took to Twitter over the weekend to raise his concerns about the trajectory the Bay State is on with coronavirus infections and hospitalizations.

Massachusetts, he wrote, has more new daily COVID-19 cases per capita then Georgia, Florida, or Texas, yet, businesses like salons and casinos remain open.

“For many months, I defended [Baker] against critics, saying our governor has done a good job,” Jha said. “Over past 6 weeks, I’ve gone from uncomfortable to aghast at lack of action. It’s incomprehensible. They must see different data because [there is] no rational explanation for lack of action.”

For many months, I defended @CharlieBakerMA against critics, saying our governor has done a good job

Over past 6 weeks, I’ve gone from uncomfortable to aghast at lack of action

The public health expert said a lockdown isn’t necessarily what’s required, but that more needs to be done to address the spread of the virus in the state.

Jha told CBS Boston on Sunday that part of the reason he is “speaking up” is he doesn’t want to see the state get to a point where everything has to be shut down.

“Over the last six weeks it’s become really clear that we are heading towards a really bad surge of infections,” the doctor said. “Things have been really getting bad for six plus weeks, and the response from the governor’s office has just been wholly inadequate.”

Massachusetts reported 4,747 new COVID-19 cases on Sunday and the seven-day average of daily new confirmed cases is now above 3,400, compared to early November when the average was around 1,700.

Jha isn’t alone in suggesting the state needs to scale back its reopening in some areas given the rise in cases.

The White House Coronavirus Task Force told Massachusetts officials last week that statewide rollbacks should be undertaken, but Baker has repeatedly said during recent press conferences and interviews that there are no plans to impose new or additional COVID-19 restrictions.

During a Sunday interview on WCVB, Baker explained why he has no immediate plans to roll back the state’s reopening.

“The experience we, in Massachusetts, are having with this thing in the fall is just different from the experience we had in the spring,” the governor said. “If you looked at the spring, we literally went from a few cases and a few hospitalizations to having 2, 3, 4 thousand people in the hospital in the course of about 45 days. We’ve been on an increasing hospital trend with COVID since Labor Day, which at this point was three months ago, and we now have about 1,265 people in the hospital. And we had a thousand people in the ICU back in the spring and we now have about 260 people there.”

A spokesperson for the Massachusetts COVID-19 Response Command Center told Boston.com in a statement on Monday that even though the Baker administration is “not announcing more restrictions now, all options are on the table” as the state continues to evaluate and monitor public health data.

“Massachusetts is one of the top testing states per capita in the nation, the Baker-Polito Administration recently put stricter guidance in place, including a stay at home advisory, strengthened mask order and early business closures,” the statement read. “All residents need to do their part to stop the spread of the virus so the Commonwealth can keep schools and the economy open: wear a mask, wash hands, keep your distance and avoid groups.” 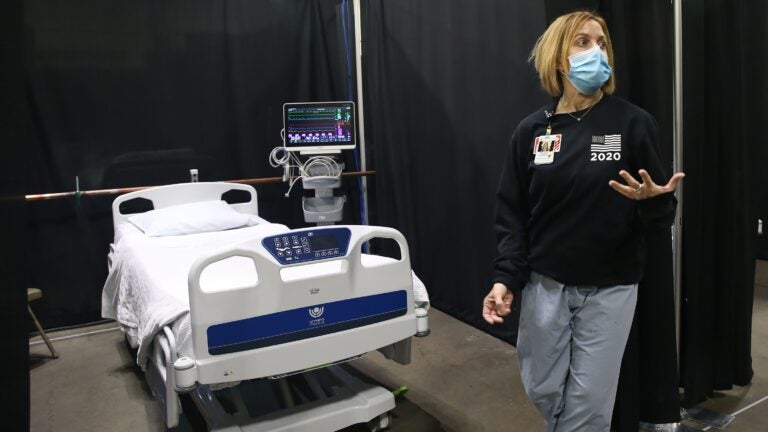