For more than a week, tensions have flared between Los Angeles restaurant owners and politicians over the county’s ban on outdoor dining, which health officials say is necessary to slow the surging pandemic — and restaurateurs say is destroying their livelihoods.

The controversy came to a head Saturday when a restaurant owner shared a video on social media showing tents, tables and chairs set up as a catering station for a film crew — just feet away from her eatery’s similar outdoor dining space, which has sat empty since the restriction went into effect late last month.

“Tell me that this is dangerous, but right next to me — as a slap in my face — that’s safe?” Angela Marsden, who owns the restaurant, Pineapple Hill Saloon & Grill, said as the video panned from her outdoor dining space to the film crew’s catering site.

Marsden had already organized a protest against the outdoor dining ban before discovering the film tents. On Saturday, she and others gathered outside County Supervisor Sheila Kuehl’s house, saying the government’s uneven application of the rules was crushing small businesses.

Kuehl, who declined to comment Saturday, was one of several supervisors who voted last month to let the ban, issued by the Los Angeles County Department of Public Health, go into effect.

The catering site was for a crew filming “Good Girls,” a comedy television show that airs on NBC, according to Philip Sokoloski, a spokesperson for FilmLA, which helps Los Angeles manage film permits. Sokoloski said the catering site and the film location nearby were both authorized under a permit issued by the city.

The county health department noted in a statement that film crews are regularly tested for the virus and that, unlike at restaurants, people do not mingle for “extended periods of time without their face covering.” Audiences are not allowed at film sites under the county’s guidelines.

“This is different from restaurants that serve different customers throughout the day,” the unsigned statement read.

Mayor Eric Garcetti, who days ago announced a one-time payment of $800 to food industry workers, urged residents to support restaurants by ordering takeout and delivery but said the restrictions were necessary to reduce the virus’s spread.

“My heart goes out to Ms. Marsden and the workers at the Pineapple Hill Saloon who have to comply with state and county public health restrictions that close outdoor dining,” Garcetti said. “No one likes these restrictions, but I do support them as our hospital ICU beds fill to capacity and cases have increased by 500%. We must stop this virus before it kills thousands of more Angelenos.”

California has declared entertainment industry workers essential, and in Los Angeles County they must follow strict guidelines such as eating in staggered shifts or in an area large enough to stay 6 feet apart.

Marsden said in an interview that she saw two people eating without masks at the tables when she went to her restaurant Friday to pick up paychecks for her employees and supplies for the protest.

“It was devastating,” she said. Referring to her staff, she added, “They can’t pay their rent. They have to tell their kids they don’t have a job or money for Christmas.”

She said she had worked hard to make her outdoor patio compliant with the previous guidelines for outdoor dining before it, too, was banned.

The dispute over outdoor dining is not the first time Los Angeles’ entertainment industry has created a real-life drama over coronavirus restrictions. On Tuesday, Garcetti said he would reopen a coronavirus testing site that had been closed for the filming of a movie featuring Addison Rae, a star on TikTok, after residents criticized its closure.

California is seeing its sharpest increase in cases since the pandemic took hold, and Los Angeles County has reported a record number of virus cases in recent days. Over the past week, the county has reported an average of more than 6,000 cases and 34 deaths daily.

Indoor dining has been banned for months in the county, but health officials prohibited outdoor dining Nov. 25, the day before Thanksgiving, “to reduce the possibility for crowding and the potential for exposure.”

Restaurants and some cities within Los Angeles County revolted against new prohibitions on outdoor dining, saying the risks of spreading the virus outdoors were not great enough to justify shutting down businesses. Pasadena allows limited outdoor dining. And the Beverly Hills City Council unanimously passed a resolution Tuesday calling on the county to repeal the restrictions and directing its staff to explore whether Beverly Hills should create its own health department instead of relying on the county’s.

A Los Angeles County judge on Wednesday ordered health officials to produce scientific evidence that backs up the ban on outdoor dining.

“You have to do a risk-benefit analysis for public health,” Judge James Chalfant said at the hearing, according to The Los Angeles Times. “You don’t just talk about the risk of spreading disease. You have to talk about the benefit of keeping restaurants open.”

The California Restaurant Association, which filed a lawsuit challenging the ban, had urged Chalfant to block the outdoor dining restrictions, but he previously declined to do so. The trade group’s president welcomed the judge’s demand for evidence from the county.

“As we’ve repeatedly said, their order was arbitrary and targeted restaurants unfairly, without supporting evidence,” Jot Condie, the president, said in a statement. 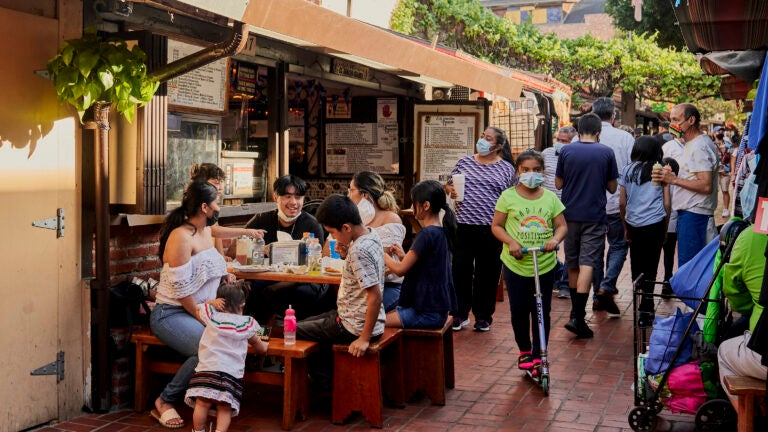