Boston area residents may want to prepare for the possibility of lines outside local grocery stores, if they haven’t formed already.

In an effort to limit the spread of COVID-19 amid rising hospitalization and deaths due to the disease, Gov. Charlie Baker last week announced a new 25 percent capacity limit for most businesses in Massachusetts. The new restrictions, which took effect Saturday, are the lowest maximum occupancy restriction that industries — from offices to gyms to retail stores — have had to adhere to since the beginning of the state’s reopening process.

And for supermarkets, it means the potential return of the outside lines that were characteristic of some of the state’s busiest stores during the spring.

Even during the long holiday weekend, Somerville’s notoriously busy Market Basket saw lines form on Saturday, the first day the new limits took effect. Stop and Shop, the largest supermarket chain in Massachusetts, also expects potential lines at its smaller stores, despite generally avoiding them under the 40 percent occupancy limit set in the spring. Jen Brogan, a spokeswoman for the Quincy-based chain, encouraged grocery shoppers to take advantage of their home delivery and curbside pickup options.

“We have a capacity counter stationed at the entrance to every store to ensure we are not exceeding the limit,” Brogan said. “In the event we are approaching the maximum allowable customers, our associate will begin to queue customers outdoors and six feet apart. The likelihood of lines will be dependent on store size and the time of day that customers visit.”

Trader Joe’s, which has regularly seen lines at stores during the weekends, has a policy of self-imposing occupancy maximums that are below existing state limits “out of an abundance of caution,” according to Kenya Friend-Daniel, the chain’s national public relations director. That includes the new 25 percent limit in Massachusetts, she added.

A spokeswoman for Wegmans, which saw lines with capacity limits as low as 15 to 20 percent in the spring, said the chain will adhere exactly to the new 25 percent limit. According to Wegmans public relations director Deana Percassi, the company has also installed live outdoor cameras at its highest-traffic stores, like in Chestnut Hill, so that shoppers can monitor for lines.

Advocates hope the new limit will provide some additional protection to the frontline workers, who are most at risk of exposure to COVID-19. In April, the United Food & Commercial Workers International Union called for a national occupancy limit of 20 to 30 percent for grocery stores in order to facilitate social distancing. Last week, Baker said the limits were part of the administration’s larger effort to “reduce the spread of the virus, without closing our schools or our businesses.”

Though some Massachusetts residents may have to plan extra time for their grocery runs, there’s research suggesting that restrictive occupancy limits are an effective tool to combat COVID-19 transmission, while avoiding complete business shutdowns.

A study published last month by researchers from Stanford and Northwestern found that 20 percent occupancy limits at places like restaurants, gyms, churches, hotels, and grocery stores reduce the number of new infections by more than 87 percent, while resulting in 42 percent fewer overall visits. Similarly, a 30 percent occupancy limit could reduce infections by 75 percent, while losing 26 percent of customers.

Serina Chang, a co-author of the study and a PhD student at Stanford, told Boston.com that the 25 percent limit in Massachusetts “seems like a promising policy, based on our model’s findings that capacity limits can help to reduce risks for individuals visiting businesses, without completely shutting down business.”

The study also found that occupancy limits could have the biggest impact in low-income neighborhoods, which have been hit disproportionately hard by the pandemic, since residents have less ability to change their work, travel, and shopping patterns to avoid exposure to the virus. Specifically looking at grocery stores, transmission rates were twice as high in lower income areas in eight of the 10 metro areas studied. That’s because mobility data found that grocery stores in low-income neighborhoods have 59 percent more hourly visitors,  authors wrote.

“The reason why there are disparities is not only pre-existing conditions and unequal access to healthcare, which are important, but also actual mobility patterns,” David Grusky, another one of the study’s co-authors, told The New York Times in a Dec. 16 article. “Because low-income groups are more likely to be essential workers, they tend to be more exposed to infection and work in places that are denser and have longer dwell times.”

The order setting 25 percent occupancy limits in Massachusetts is scheduled to expire after two weeks, on Jan. 10, unless Baker acts to extend it. Chang declined to say whether their models suggest that it should be extended, since they didn’t specifically study Massachusetts.

“In general, extending restrictions should help to further improve reduced infections, but that of course needs to be balanced against other factors, such as how long businesses can sustain opening with limited capacity,” Chang said.

So, at least for now, those grocery store lines may be worth the wait. 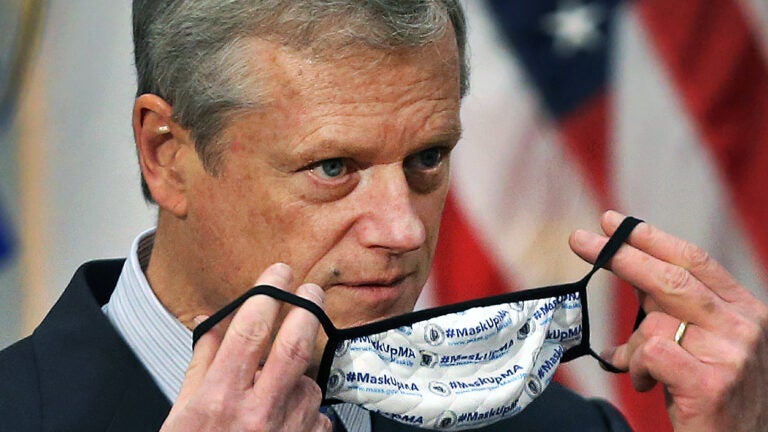