Dr. Ashish Jha is arguing that the United States must seriously consider delaying second doses of the COVID-19 vaccine and instead opt for giving more people the initial shot first as the nation’s vaccine rollout falters, and with a more contagious strain of the virus expected to spread.

The dean of the Brown University School of Public Health, with Dr. Robert Wachter, chair of the department of medicine at the University of California at San Francisco, laid out the case for updating the vaccination rollout in the Washington Post.

“As Mike Tyson famously said, ‘Everybody has a plan until they’ve been punched in the mouth,’” the two doctors wrote in a Sunday op-ed. “When it comes to COVID-19, we’re being punched in the mouth over and over again. It’s time to change the plan; namely, we should give people a single vaccination now and defer their second shot until more doses of vaccine become available.”

The United Kingdom has already opted to delay the second doses of Pfizer and Oxford University/AstraZeneca vaccines as a means of more quickly providing a wider group of people with the initial protections that the first shot offers.

Jha and Wachter argued that with fewer approved vaccines than hoped by the start of 2021, bottlenecks in the distribution of the shots, hundreds of thousands of people being infected and thousands dying daily in the United States, and now a new variant of the virus spreading, action must be taken immediately.

“We need to vaccinate as many people as quickly as possible to save the most lives,” they wrote.

According to the physicians, the clinical trials for the Pfizer and Moderna vaccines indicate that the first shot provided benefits about 10 days after it was administered, and by the time second shot was given about a month later, the initial dose was already about 80 to 90 percent effective against COVID-19. But the second dose adds effectiveness and potentially makes the immunity from the vaccine “more durable,” they said.

On the ‘Today’ show Monday, Jha said the data from the clinical trials indicate delaying the second dose could still be “quite effective.”

“Given the crisis we’re in, I think it’s worth at least exploring it,” he said.

Spoke to @SavannahGuthrie on @TODAYshow

Jha and Wachter stressed in their op-ed that they are not arguing that people shouldn’t receive both shots, but they acknowledged that there is a risk in the proposal.

“We don’t know if and when the immunity from the first shot begins to wane,” they wrote. “But data from Moderna, for example, is reassuring. It shows robust immune response four weeks after the first shot, and most experts believe it is extremely unlikely immunity would somehow plummet by week eight or even week 12 following a single shot. Another concern is that with a delay, some people may forget to get their second shot. It will require effort to track people and remind them to receive it.”

But the reality, the doctors said, is that between 50,000 and 100,000 Americans will die of COVID-19 in January alone. The pandemic has already claimed the lives of more than 350,000 people in the United States, with experts predicting there will be a surge in cases and deaths following holiday gatherings that took place around Christmas and New Year’s.

On Twitter, Jha emphasized that with the current plan most 75-year-olds won’t get their first dose of the vaccine for “many more weeks” while most 64-year-olds won’t see theirs for months.

By then, the new variant of the virus could become dominant, he said.

And while it so far doesn’t appear to be more deadly at the individual level, it being potentially more infectious means it will cause more cases, which in turn means more hospitalizations and deaths, Jha and Wachter wrote.

“Anyone we can protect now is someone less likely to get infected tomorrow and die in 4 weeks,” Jha wrote on Twitter. “Bottom line is that I realize we are pushing for something that has risk. But we should not ignore the risk of not doing this at all.”

Obviously, if you want to stick to the trials (reasonable position), then stay with standard interval

But soon, we’ll be confronted with question — do we give 2nd shot to some people or 1st shot to more people

Is there clinical trial evidence that 1 dose is helpful?

But while we may not be sure, it doesn’t mean we have no idea

Here’s one of our nation’s most expert immunologists, @VirusesImmunity laying out her assessment of delayed vs immediate 2nd dosehttps://t.co/BN7k4Xxx5C

And that number again in February

And most 64 year-olds won’t for months

And the new variant will become dominant in that time

And to us, the answer is, get first doses out immediately

Get 2nd doses into arms as they become available later winter

Now, reasonable to make some exceptions like nursing home residents where you want to maximize protection

But if you listen to Operation Warp Speed 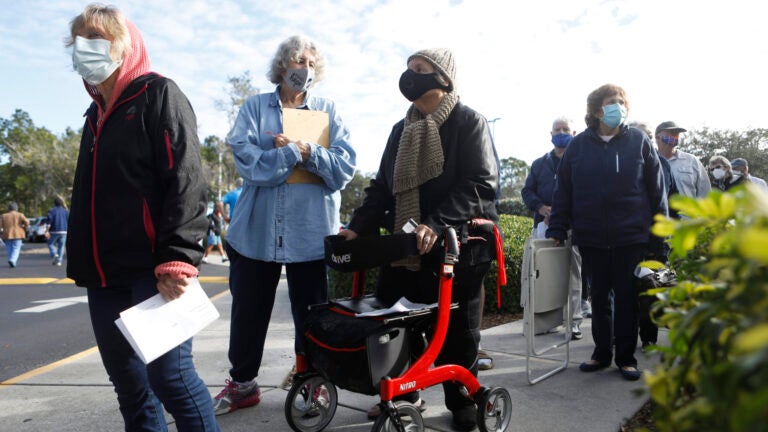