Massachusetts residents over the age of 75 could get the COVID-19 vaccine earlier than originally planned this winter, under the state’s newly adjusted prioritization order.

Following a change in federal guidance, Massachusetts Health and Human Services Secretary Marylou Sudders announced Monday that all Bay Staters over the age of 75 will be part of the first group eligible to get the vaccine during Phase 2 of the state’s three-phase vaccination plan, in addition to individuals of all ages with two or more co-morbidities (who were already included in the group).

According to Sudders, the change affects 170,000 residents, who wouldn’t already be eligible to get the vaccine by the beginning of Phase 2.

Previously, residents over the age of 65 (without multiple co-morbidities) were lumped into the third and final group of Phase 2, after individuals with two or more co-morbidities and certain essential frontline workers (who made up the second sub-group).

Massachusetts is currently still in the early stages of Phase 1 of the rollout, which focuses on health care workers, nursing homes, and first responders.

The change Monday comes after the Centers for Disease Control and Prevention’s Advisory Committee on Immunization Practices updated its recommendations last month. According to Sudders, the state’s COVID-19 advisory group subsequently met twice to see if any changes to their own plan was warranted.

“The group came to consensus on one single change to the current recommendations, taking into particular consideration ACIP’s highlighting of individuals age 75 and older as being at particular risk of serious complications of COVID-19,” she said.

During the press conference Monday afternoon, Gov. Charlie Baker said the vaccine rollout  “translates into brighter days ahead, but we still have some tough days in front of us.”

On Sunday, Massachusetts reported 3,110 new COVID-19 infections and 105 additional deaths due to the disease. The state’s rate of positive COVID-19 tests, hospitalizations, and deaths have also continued to climb to levels not seen since the initial spring surge.

Officials are particularly concerned that the second coronavirus surge, which accelerated around Thanksgiving, is increasingly affecting older residents in Massachusetts, according to Baker. Initially, the age distribution of infections during the fall surge skewed significantly younger compared to the spring.

But Baker says that — as feared — is changing.

“The thing that troubles us all the most is, since Thanksgiving, the average age of the people who’ve been hospitalized has increased dramatically,” he said. “And that has real consequences with respect to life and death.” 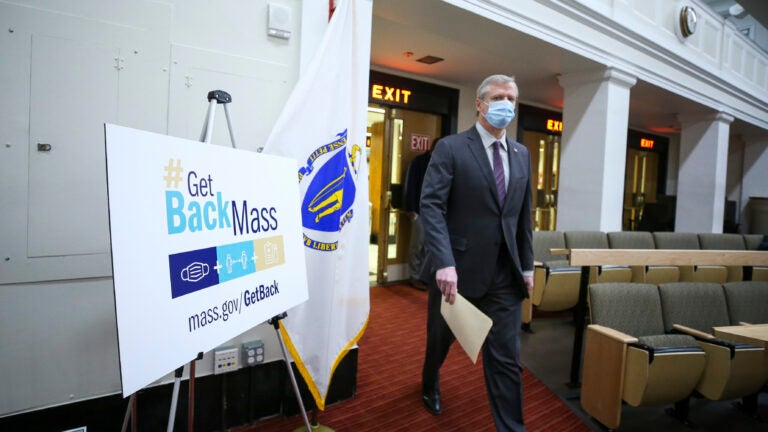