A 20-something who works on computers. A young researcher who studies cancer. Technicians in basic research labs.

These are some of the thousands of people who have been immunized against the coronavirus at hospitals affiliated with Columbia University, New York University, Harvard and Vanderbilt, even as millions of front-line workers and older Americans are waiting their turns.

The Centers for Disease Control and Prevention has issued recommendations intended to ensure that the nation’s vaccines first reach those at highest risk: health care workers who interact with COVID-19 patients, and residents and staff members at nursing homes, followed by people age 75 and older and certain essential workers.

Each state has established its own version of the guidelines, but with the rollout proceeding at a glacial pace, pressure has been growing for a more flexible approach. Officials at the CDC and the Food and Drug Administration have recently suggested that it might be wiser to simply to loosen the criteria and distribute the vaccine as widely as possible.

Still, those officials did not envision that the vaccines would be given to healthy people in their 20s and 30s before older people, essential workers or others at high risk. States should still prioritize groups that “make sense,” Dr. Stephen Hahn, the FDA commissioner, told reporters Friday.

But a handful of the nation’s most prestigious academic hospitals have already taken the notion much further. Workers who have nothing to do with patient care, and who are not 75 or older, have been offered the shots. Some of the institutions were among the first recipients of the limited supplies in the United States.

“Cronyism and connections have no place in the rollout of this vaccine,” said Ruth Faden, a bioethicist at Johns Hopkins University in Baltimore. “If we don’t do this right, the consequences could be quite catastrophic, so it’s really critical that people be hypersensitive to the rules of the game here.”

The CDC never intended to include workers who do not interact with patients, like administrators and graduate students, in the first tier of priority vaccinations, said Dr. Stanley Perlman, an immunologist at the University of Iowa and a member of the committee that issued the recommendations.

“This all got so confusing,” he said. “In retrospect, I think it probably needed to be a little more exact on what we were thinking, because we were never thinking about hospital administrators.”

In Boston, Brigham and Women’s Hospital and Massachusetts General Hospital, both affiliated with Harvard University, have immunized more than 34,000 employees, including those involved in patient care, researchers who may come in contact with coronavirus samples and those engaged in clinical trials, according to Rich Copp, a spokesperson for the hospitals.

The reason? Some laboratory scientists may be needed in the hospitals as the coronavirus resurges. “Our first-wave experience demonstrated that some members of the research community may need to be redeployed to support work in patient care settings with COVID,” Copp said.

Still, the medical centers have announced plans to immunize the rest of their employees beginning Monday.

In Nashville, Tennessee, Vanderbilt University Medical Center asked all staff members, whether they were treating patients or not, to register for vaccination. Inoculations began in December, when the Tennessee Hospital Association sanctioned vaccinations for all hospital employees regardless of their roles.

On Jan. 6, the medical center announced plans to begin vaccinating its high-risk patients, but only after it had “administered the initial vaccine dose to well over 15,000 people working at the medical center,” according to an email it sent to its patients.

“We are continuing to follow the guidance we receive from the Tennessee Department of Health as we vaccinate the Vanderbilt Health workforce and other priority groups of patients, employees and community health care personnel,” John Howser, chief communications officer for the medical center, said in a statement.

But the Tennessee Department of Health sees it differently. “Hospitals have been encouraged since the beginning of the onboarding process to use any remaining vaccine to vaccinate high-priority populations,” said Bill Christian, a spokesperson for the department.

“Some hospitals interpreted their ‘staff’ broadly,” he added.

The Tennessee department, he said, “continues to applaud hospitals who have prioritized only their front-line, high-risk staff for vaccination and made any remaining vaccination available to assist reaching community needs in vaccinating” high-priority groups.

“I wish our elderly relatives had received the vaccine before me,” said a young employee at Vanderbilt who has no contact with patients and asked not to be identified for fear of reprisals.

In New York state, only a fraction of the estimated 2.1 million front-line workers have been immunized. Gov. Andrew Cuomo has threatened to levy fines of up to $100,000 against hospitals that do not vaccinate quickly enough to use their doses.

At Columbia University, word quickly spread through research labs far removed from patient care: If you showed up at Milstein Hospital, the university’s primary medical center, you could get a vaccination — never mind whether your work had anything to do with patients.

Graduate students, postdoctoral fellows and researchers were soon lining up at the hospital auditorium, according to several university employees. Nearly everyone at one cancer research center affiliated with the hospital received the vaccine.

Hospital officials said that they had eventually become aware of emails directing people to the auditorium but that anyone who did not need the vaccine had been turned away.

“We have worked to vaccinate tens of thousands of employees to date, beginning with patient-facing staff, and are constantly striving to improve our vaccination process,” said Kate Spaziani, vice president of communications for the hospital. “We will continue to do so until everyone receives a vaccine. We are following all New York State Department of Health guidelines on vaccine priority.”

But some recipients were upset to learn they did not qualify under state guidelines.

“My understanding now is that it wasn’t our turn, and I feel terrible about going out of turn,” said one young researcher whose work has no bearing on COVID-19. “I’m also frankly a bit angry at the hospital and at the university for not controlling it properly.”

At NYU’s Langone Medical Center, the outreach to staff members who have no contact with patients was more deliberate.

“We are currently offering the COVID-19 vaccine to front-line employees only,” the center’s website says. “We will message our patients as soon as we have the vaccine available for patients.”

But in an email to staff members Dec. 28, Andrew Rubin, a senior vice president at the medical center, said the center had finished vaccinating its 15,000 employees who interact with patients and would begin vaccinating all other staff members. There was no mention of older adults or other priority groups specified by New York state.

An email Tuesday to NYU medical center staff members who had not yet signed up for vaccination said, “As an employee of a health care institution, you have the opportunity to receive a vaccine that millions across the country want — and you can have, right now.”

In a tacit admission that those employees would not otherwise qualify for the vaccine so soon, the email warned that once the state expanded the eligibility criteria, “you may have to wait weeks, if not months, to receive it based on demand and availability.”

State officials were dismayed that both NYU and Columbia had opened up vaccinations to low-risk staff members ahead of millions of state residents who needed the shots.

On Friday, New York expanded its guidance on vaccinations to include essential workers and those older than 75.

Still, the guidance “does not provide carte blanche to vaccinate all employees of a hospital entity regardless of their function,” said Gary Holmes, a spokesperson for the state’s Department of Health. “While we do not know all the facts here, to the extent there is a violation, DOH will investigate it.”

Privately, some state officials were furious. The institutions should instead have asked the state what to do next as soon as they were done immunizing front-line staff members, said one official, speaking on condition of anonymity because he was not authorized to discuss the matter.

“The only reason that they have as much vaccine as they have was because they were custodians of vaccine — because they have cold storage,” the official said. “It wasn’t NYU’s vaccine to use for NYU.”

The problem is not confined to academic medical centers. Some hospitals have so few checks in place that many people have been able to skirt the line with false claims to the vaccines.

In Maricopa County, Arizona, for example, an online form recommends applicants use a personal email address, rather than one affiliated with a hospital, and does not require employee identification numbers.

“Yes, we want people vaccinated, but we have to ensure the high-risk groups get access,” said Saskia Popescu, a hospital public health researcher at the University of Arizona. Having the process be so disorganized “damages trust in the public health process, and I think it’s just really heartbreaking.”

Several employees at the universities, including a few who unknowingly accepted the vaccine out of line, were also discomfited by what they saw as an inequitable and unfair process.

“It’s such a naked display of privilege, you know?” said one Columbia faculty member who did not get the vaccine and asked not to be identified for fear of retaliation from administrators. “It’s because we’re at elite universities and medical centers.” 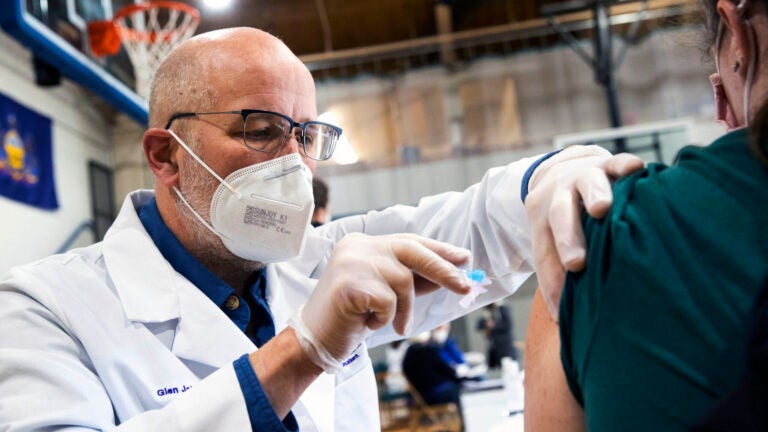